It is not the best idea to open long positions on the last day of a trading week and a month before a long weekend. On Monday, May 3, a lot of trading floors will be closed in the UK, China, and some European countries. So, the holiday-thinned market could trade under higher volatility amid low liquidity. Besides, it doesn’t make sense to trust the current price action because most traders are fixing profits at the end of the trading week and the month, thus distorting dynamics of currency pairs.

EUR/USD is no exception. On the contrary, traders speculating on this pair have an excuse to close long positions. Yesterday investors were encouraged by inflation acceleration in Germany. However, optimism which aroused yesterday faded following data on the eurozone’s CPI released today. In fact, yesterday investors found out about a surge in consumer inflation in Germany despite ongoing lockdown measures. Extending the upward trend, the CPI climbed to 0.7% on month in April and stood at 2.0% in annual terms. The pace of consumer inflation has been accelerating for 4 months straight. The HICP also logged growth both month-on-month and year-on-year. As a rule, Germany’s data serves a preview of trends in the whole eurozone’s economy. Hence, market participants had high expectations of the eurozone’s CPI data.

However, it turned out that the actual eurozone’s CPI grew to 1.6% in April, the core CPI eased to 0.8, thus extending a losing streak for 3 months in a row. In a separate report, market participants were disappointed by Germany’s GDP. Germany’s national output shrank by 1.7% sequentially in Q1 2021, worse than the forecast for a 1.5% contraction. Previously, Germany’s economy logged a minor growth in Q4 2020. No wonder, investors were discouraged by the actual GDP metrics for the January quarter even despite pessimistic forecasts. 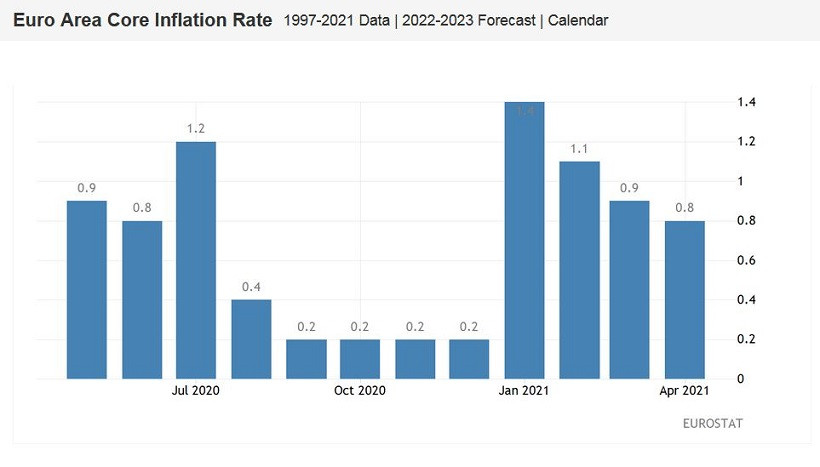 Looking from a different angle, the above-said macroeconomic data is not as dismal as it seems at first glance. Importantly, some indicators came in the green zone such as the eurozone’s GDP and the eurozone’s unemployment rate. Nevertheless, traders shifted focus towards negative features of the latest statistics on the final day of the month. So, they opted not to hold long positions. Today the US dollar found some support from the US macroeconomic data.

Oddly enough, recently dollar bulls attach no importance to upbeat fundamental data because of the dovish rhetoric of the Federal Reserve. At the policy meeting in April, the US central bank again reiterated the message of putting current settings of monetary policy on hold for long regardless of macroeconomic metrics. That’s why the crucial economic reports make a subdued impact on the greenback.

Anyway, in the context of intraday trading, macroeconomic data released today startled dollar bulls. They intensified a correctional decline of EUR/USD. The thing is that important data on personal income and spending in the US came in either in line with expectations or even stronger than expected. The Core PCE Price Index rose to 0.4% in March on month (the best score since July 2020) and jumped to 1.9% on a yearly basis (the best score since February 2020). Personal spending went out of the red zone last month, having rebounded to 4.2%. Besides, the employment cost index hit a multi-year high, having surged to 0.9% in Q1 2021. 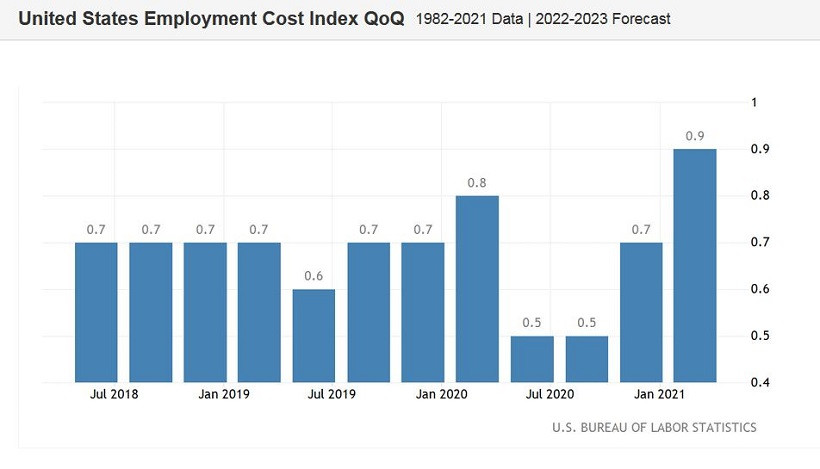 The US dollar stayed flat following the publication of this batch. Still, it regained footing across the board boosted by growing yields of 10-year US Treasuries. This fact enabled the bears of EUR/USD to expand the borders of a correctional pullback. Mixed data from the eurozone was an excuse to close long positions on EUR/USD. In the meantime, it is unreasonable to make trading decisions from both technical and fundamental viewpoints.

The ongoing price action is a correction after a rapid rally to 1.2150. Apparently, the bearish sentiment on EUR/USD will last until the end of the trading day. However, it doesn’t mean that the currency pair will extend a downward move next week. The policy update of the last Fed’s policy meeting set the stage for further weakness of the US dollar, even against the euro. Support of EUR/USD is seen at 1.2050 which is Tenkan-sen line in the daily chart. At the moment, the price is creeping towards this level. Judging by the strength of the bearish move, the bears will be able to test this target. Even in case the price sinks below this level, selling would still be risky, bearing in mind all above arguments. So, it would be better to postpone any trading decisions at least until Monday.