On our April 26th analysis we warned traders that price action in Bitcoin was justifying a bounce towards $57,000. Price then was trading around $50,000 and is now at $57,062. Short-term trend remains bullish but price is approaching important Fibonacci retracement resistance level. 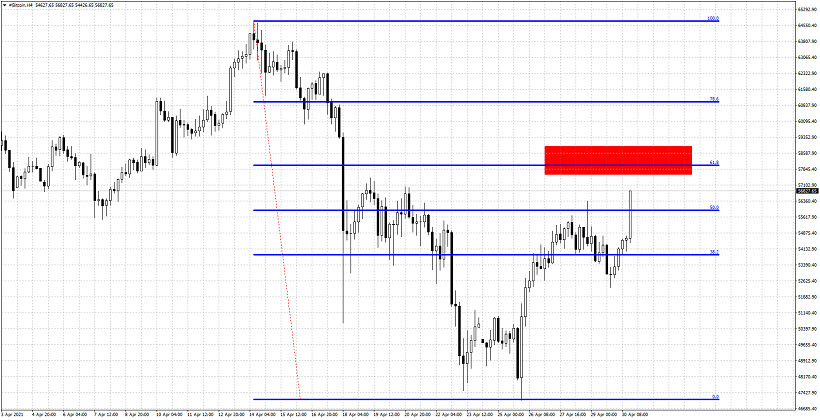 Bitcoin is making new short-term highs. Price is at $57,000 as expected and we can say there is potential to move higher still towards $58,000 where we find the important 61.8% Fibonacci retracement. This is the first important resistance bulls face in order to retain control of the trend. Usually at 61.8% Fibonacci retracement levels we see a pause in up trends or a reversal if the upward move is just a counter trend bounce. In any case this level is important resistance and bulls need to be cautious. A rejection here could bring Bitcoin back towards $50,000 or even lower. Recapturing $58,000 and staying above it is key for the up trend we are in. The $52,330 low is also an important short-term support level. Breaking below it will increase chances that the bounce from $47,000 to $57,000 was most probably a counter trend bounce. So we need to keep a close eye on the $58,000 and $52,330 price levels.