USD/JPY has started increasing again after retesting the uptrend line. It is trading traded at the 108.88 level. It may approach new highs if USDX and JP225 jump higher in the short term.

The greenback has taken the lead again after better than expected CB Consumer Confidence. The US economic indicator increased from 109.0 to 121.7. Today, the FOMC Statement and the FOMC Press Conference could bring high volatility and strong movements.

A neutral or hawkish FED could help the dollar to extend its short-term appreciation. Fundamentally, USD was somehow expected to increase after good data in the last weeks. 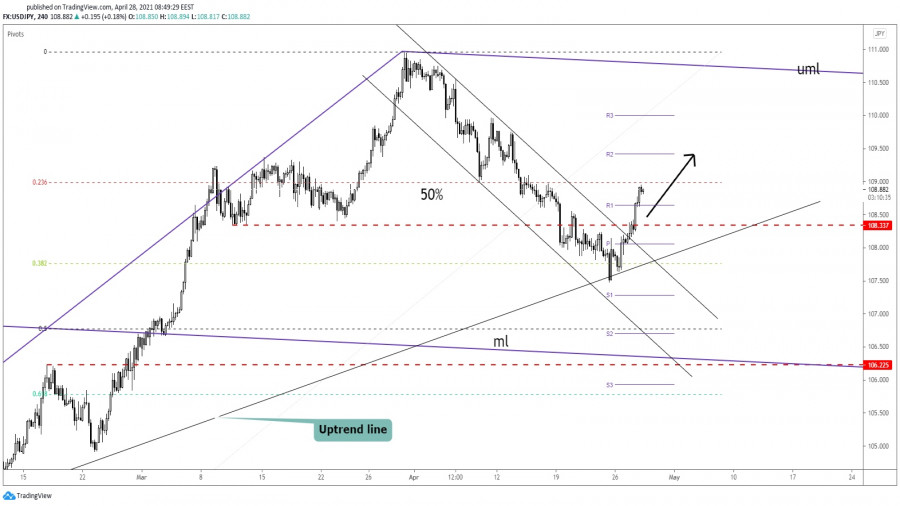 USD/JPY escaped from the down channel pattern and now is traded far above the R1 (108.64). It has found strong support on the 38.2% retracement level and now it could jump above 23.6% level.

The R2 (109.41) and R3 (109.99) are seen as upside targets if USD/JPY resumes its swing higher. The bias is bullish after the rejection from the uptrend line. A temporary decline could help the buyers to go long again.

The breakout above 108.33 static resistance and closing above 108.54 former high represented a buying opportunity. A minor consolidation above the weekly R1 (108.64) or a retest could bring a new bullish signal.

The upper median line (uml) of the major descending pitchfork is seen as a major upside target.