Bitcoin is trading at 54,717 and it seems determined to come back higher after the rate has printed a reversal pattern in the short term. The corrective phase seems over after its failure to stabilize under 48,000 psychological level.

BTC/USD has printed a bullish pattern on Sunday signaling a potential upside momentum after the most recent sell-off. The price approaches new upside obstacles in the short term. Bitcoin’s further growth should help the altcoins to increase in the coming period. 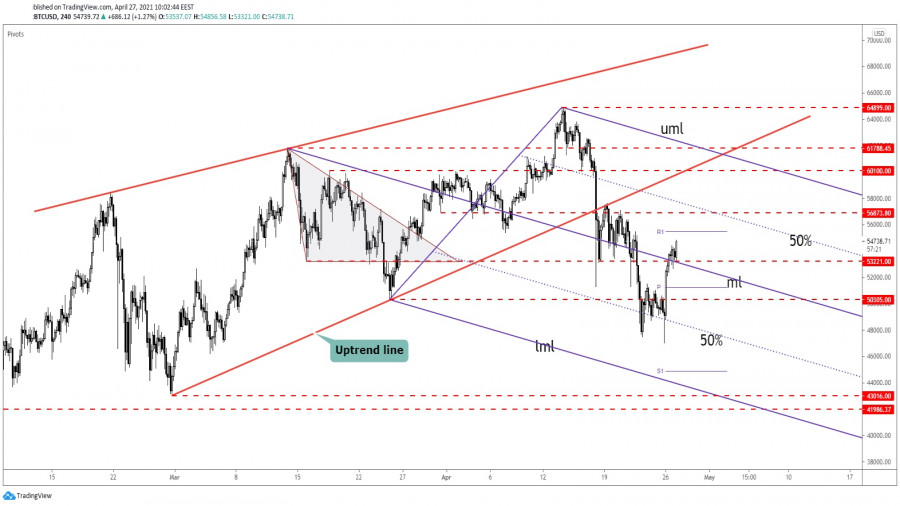 Bitcoin found strong demand around 48,000 psychological level. Its failure to stabilize under 50,000 confirms once again that the buyers are very strong despite the last correction.

As you already know from my analysis, BTC/USD was expected to drop after failing to stay above the red uptrend line and after its incapacity to approach the Rising Wedge upside line.

The rate bounced back from below the downside 50% Fibonacci line of the descending pitchfork. The pin bar printed on Sunday followed by a strong bullish candle signaled a bullish momentum in the short term.

Now the digital token is trading above the median line (ml) of the descending pitchfork and it could hit the weekly R1 (55,481) soon. Personally, I believe that the pressure remains high as long as it stays under the R1 and below the upside 50% Fibonacci line.

Sunday’s pin bar followed by an aggressive breakout through the weekly pivot (51,253) signaled that the decline could be over.

Personally, I’m waiting to see a consolidation or a new temporary decline before going higher again. BTC/USD could decrease a little again in the short term before developing a larger upwards movement towards the all-time high.

It could come back to test and retest the weekly pivot and the descending pitchfork’s median line (ml) before resuming its growth.