Last week, the US dollar weakened against its main counterparts, and the EUR/USD pair increased significantly. In the week to April 23, EUR/USD gained 0.99% despite the comments of the ECB’s President Christine Lagarde. She said it was too early for the ECB to slow its bond-purchase programme. Market participants expect Federal Reserve Chair Jerome Powell to resort to the same rhetoric during the press conference on Wednesday. If so, the US dollar may drop sharply against the basket of the main currencies. The US economy is recovering rapidly from the COVID-19 pandemic, which means that the Fed will be the first to tighten its monetary policy. Generally speaking, market participants will focus on the Fed’s two-days meeting this week. The outcome of the meeting will be known on April 28 and followed by Powell’s press conference. So far, the US dollar is incurring losses against the euro, which is clearly seen from the chart. 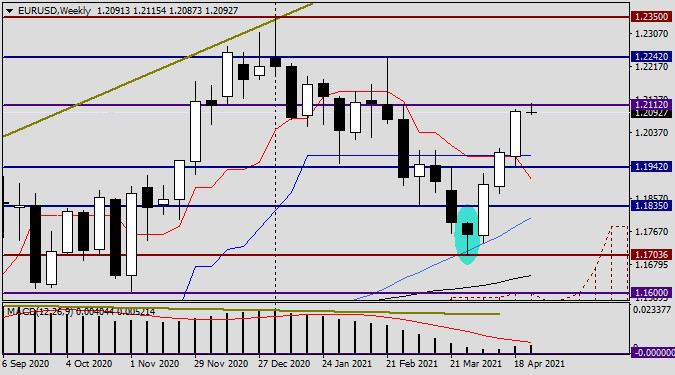 After the formation of the Hammer candlestick pattern, EUR/USD reversed and showed a three-weeks spike. The price was expected to break the important and strong price range of 1.2000-1.2030. If so, the next target for bulls would be the 1.2100 mark. The expectations came true. The high of the previous trading session was at 1.2099. The closing price was at 1.2095. Today, EUR/USD has reached 1.2115 but has failed to break the strong 1.2100 level. Instead, it has tumbled to 1.2092 and is currently trading at this level. Most likely, the price will test the 1.2100 mark several times once again. Despite a bullish market, a lot will depend on the Fed’s decision and Powell’s comments. On the weekly chart, strong support is located in the 1.1975-1.1942 range, where there is the blue Kijun-sen of the Ichimoku indicator, as well as the lows of the previous week. Resistance is in the 1.2100-1.2120 range. 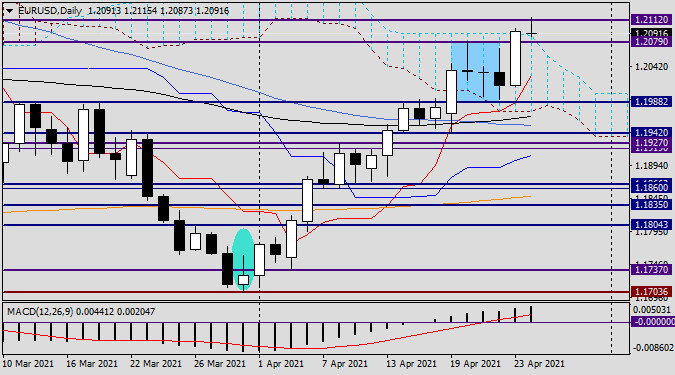 According to the daily chart, the pair successfully left the Ichimoku Cloud and the price closed at its upper boundary on April 23. Clearly, it was a bullish signal that indicated the strengthening of the quote but only if it consolidated above 1.2100. On April 23, there was a series of bearish signals that helped reverse the pair. However, Friday’s big bullish candlestick set everything straight. Most likely, the bullish trend on EUR/USD will extend. That is why traders should consider entering long positions after a short-term bounce to 1.2080, 1.2060, and 1.2030. Opening short positions can be considered in case of a correction. Thus, you may enter short positions if there are reversal candlestick signals near 1.2100 on the daily or lower time frames.

Have a nice trading day!