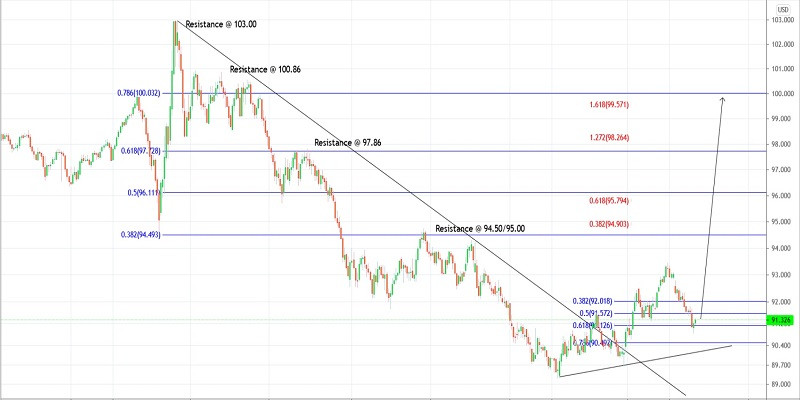 The US Dollar Index had dropped through 90.85 levels yesterday before finding support. The drop was expected from 93.43 but it has been quite deeper towards fibonacci 0.618 retracement of the recent upswing between 89.70 and 93.44 levels respectively. It has changed the wave structure a bit and we are now projecting prices towards 98.00 and higher in the next few weeks.

The US Dollar Index is seen to be trading at around 91.35 levels at this point in writing and is expected to push further towards 91.80 in the immediate near term. The index might be underway to produce a Morning Star candlestick pattern on Daily Chart, which indicates a potential turn higher. Immediate price support is strong around 89.70, while resistance is seen around 95.00 levels respectively.

The series of carving higher highs and higher lows has already begun from 89.20 lows earlier on January 06, 2021. It remains to be seen how long the bulls are able to stay in control going forward. We are expecting at least 95.00 levels from here, if not any further.