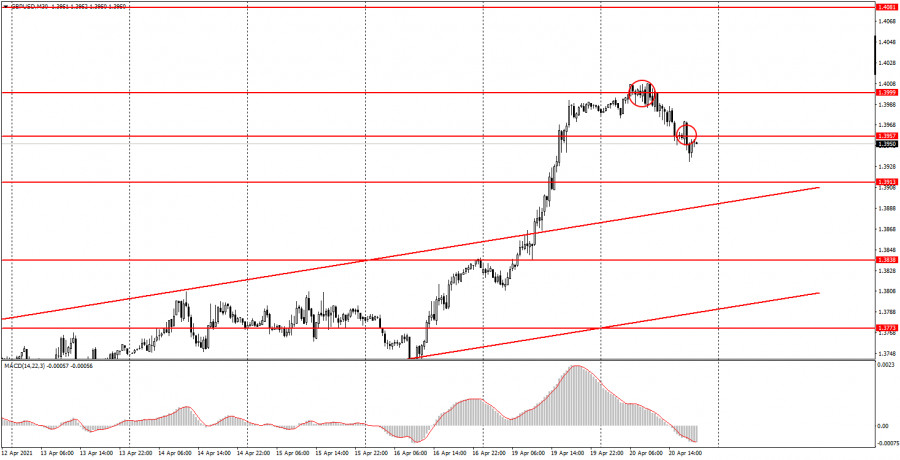 On Tuesday, the trajectory of the GBP/USD pair on the 30-minute time frame was quite different from the two previous sessions. On Friday and Monday, we had strong signals for the pair that brought good profit. On Tuesday, however, most of the signals were not used. Since an ascending channel remained in place for novice traders, they needed to trade upwards following a rise of the MACD indicator. However, during the day, not a single buy signal was generated. At first, the indicator was declining to the zero level and was not correlating with the price at all. Then, a correction began which continued for the rest of the day. Formally, there was a rebound from the level of 1.3999. However, let’s take a closer look at the price action around this level. Is it possible to say for sure that a clear signal for a rebound or a breakout of this level has been formed? This is exactly what we are constantly paying your attention to. The signal should be as clear and accurate as possible, it shouldn’t be ambiguous. This was not clearly the case for the pair that spent about 5 hours in total near the level of 1.3999. The same is true for the next level of 1.3958 which was tested by the pound/dollar pair. The price declined to this level, and then for about two hours candlesticks opened and closed exactly at 1.3958. Later, the pair had finally settled below this mark, which could be regarded as a sell signal. In this case, a buy deal should have been opened a little earlier as the price was rebounding from the level of 1.3958. A buy trade could have been closed with a loss of 23 pips, and a sell trade should have been immediately opened afterwards. At present, this deal remains open on this time frame with a current profit of about 10 pips. 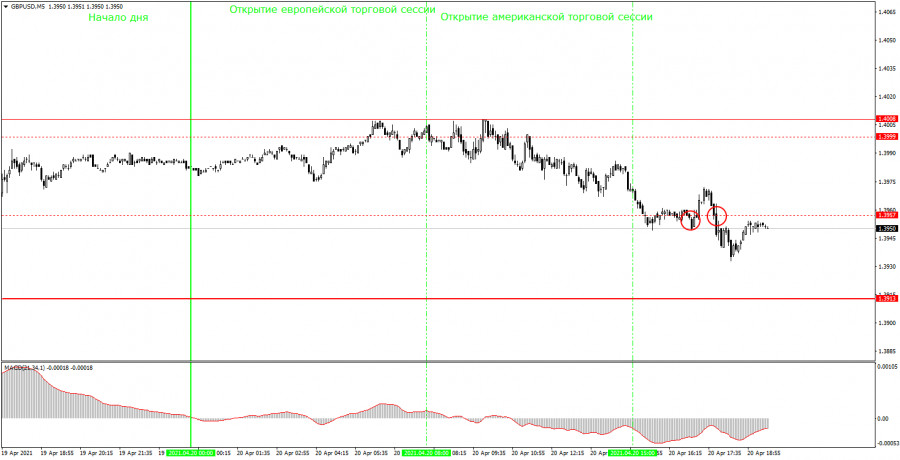 On the 5-minute time frame, the pair’s trajectory was not that smooth. Thus, near the previous key level of 1.3999, the pair made an attempt to break through it and then had bounced back from it for about 10 times. Of course, it was a flat movement that began at night. However, it was very difficult for beginners to define it. The next obstacle for the price was found at the level of 1.3957. The price was also hovering near this level for about an hour, not being able to either consolidate below it or rebound from there. Therefore, we believe that there were only two signals on the 5-minute time frame that should have been followed. Both buy and sell signals are circled on the chart. The first one turned out to be false and brought a loss of 17 pips. The second one completely repeated a similar signal on a 30-minute time frame and could allow novice traders to win back at least some of their losses during the day. Also at the very beginning of the European session, unemployment data was published in the UK as well as claims for unemployment benefits and wages. Although the data supported the British currency, GBP did not continue to rise. Hence, the publications were ignored by the market.

How to trade on Wednesday:

On Wednesday, we recommend trading upwards on the 30-minute time frame although the price went above the ascending channel. Thus, tomorrow you should wait for the formation of new buy signals after an upward reversal of the MACD indicator. This indicator has already moved lower, so a buy signal may be generated in the near future. However, we recommend waiting for the morning session to assess the situation from a new angle. No important events are planned on April 21 in the US, while the UK will publish inflation report for March. On the 5-minute time frame, the key levels are 1.3865, 1.3913, and 1.4008. The price can either pull back from them or make a breakout. As usual, we set Take Profit at a distance of 40-50 pips on a 30-minute time frame. On a 5-minute time frame, the nearest level will serve as a target. If the nearest level is located too far, then it is recommended to maintain the manual mode of the trade, tracking changes in the market. As soon as the price passes 20 pips in the right direction, we recommend setting Stop Loss to breakeven.

Red lines are channels or trendlines that display the current trend and show in which direction it is better to trade now.