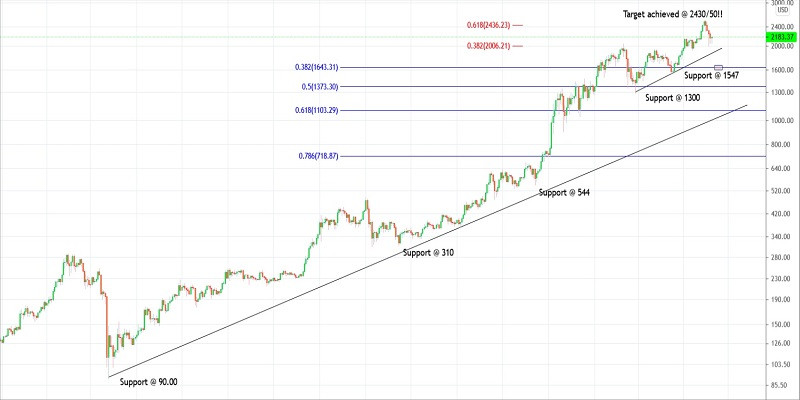 Ethereum had managed to hit both fibonacci targets projected around $2,000 and $2,436 over the past few week (see the red color projections). The sharp decline that came through thereafter was not a surprise as we expect prices to drop towards $1,500 mark in the next few weeks. Also note that it is close to fibonacci 0.382 retracement of the rally between $89.50 and $2,550 levels respectively.

Ethereum might rally towards $2,350 zone before resuming its next leg lower towards $1,500/1,600 mark. The crypto is seen to be trading close to $2,185 levels at this point in writing and is expected to produce a short pullback rally either today or tomorrow. Also note that immediate support is just below $2,000, followed by $1,540/50 levels respectively.

Looking at the overall structure, the uptrend still remains intact, but we might see a corrective drop towards $1,500 mark, before the rally could resume. Traders are advised to exit short positions if still holding for the immediate short term and sell again around $2,300 mark.