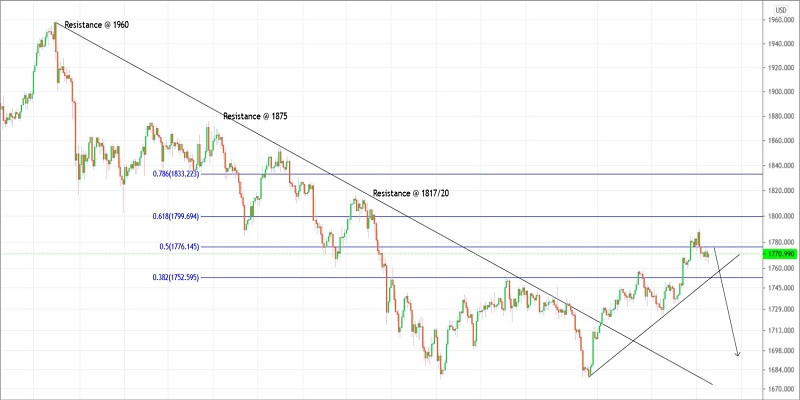 Gold might have completed its corrective rally that had begun since $1,676 lows around March 08, 2021. The yellow metal has produced a complex corrective rally consisting of 3 waves. The first wave carried prices through $1,755, followed by a drop towards $1,678 levels respectively. The final leg has reached up to $1,790 before turning lower again. Also the fibonacci 0.50 retracement between $1,875 and $1,676 has been tested.

Gold is seen to be trading around $1,770 levels at this point in writing and might test $1,780 zone before reversing lower again. Immediate resistance is seen around $1,820 mark, while support is at $1,723 levels respectively. A break below $1,723 will confirm that a meaningful top is in place around $1,790 levels and bears are back in control.

On the flip side, it is also possible for Gold to rally towards $1,800 to test fibonacci 0.618 retracement before reversing lower again. Either way, prepare for a drop towards $1,650 and $1,550 levels, going further. Also note that resistance trend line which broke earlier is now providing the necessary angle for prices to print lower lows below $1,676.