XRP/USD made a low today around $1.12 having made a high this week at $1.9617. So far price has retraced 61.8% of the latest rise after the break out at the beginning of April. Price has broken below our horizontal support levels and has reached our next pull back target area which was around $1.10. 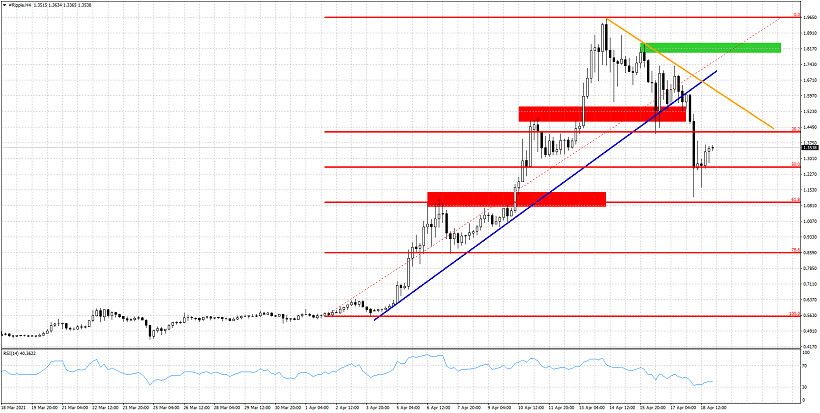 XRP/USD has already broken the blue trend line support and as per our analysis this was a sign that a deeper correction was coming. In our last analysis we warned traders that as long as price was trading below $1.80-$1.84 price was vulnerable to a move towards $1.10 specially if $1.40 was broken. Price has now reached the second horizontal support area and 61.8% Fibonacci retracement. This area of support is very important and we already witness a bounce off this support. In order to confirm a major low in place, price will need to break above the orange downward sloping resistance trend line. This resistance is at $1.61. Until then, there is still danger of a deeper pull back below $1.00. 61.8% retracement levels are usually trend change levels, so there are increased chances that price turns around from this support area and starts its next leg higher. If the low is in and we are starting the next bullish move, our target is at $2.55 and next at $3.41.