AUD/USD is trading in the red at 0.7736 level after reaching a new high of 0.7761. A minor decline is natural and expected after the sharp rally. USDX’s further decline helped the Aussie to appreciate versus the greenback.

Surprisingly or not, the USD dropped further even though the US data came in better than expected in the last days. The Retail Sales registered a 9.8% growth beating 5.8% expected, the Core Retail Sales increased by 5.1% more than 8.4% estimates, while the Unemployment Claims dropped unexpectedly lower from 769K to 576K.

Today, the US is to release the Prelim UoM Consumer Sentiment, Housing Starts, and the Building Permits. Better than expected data could push the greenback higher during the day. 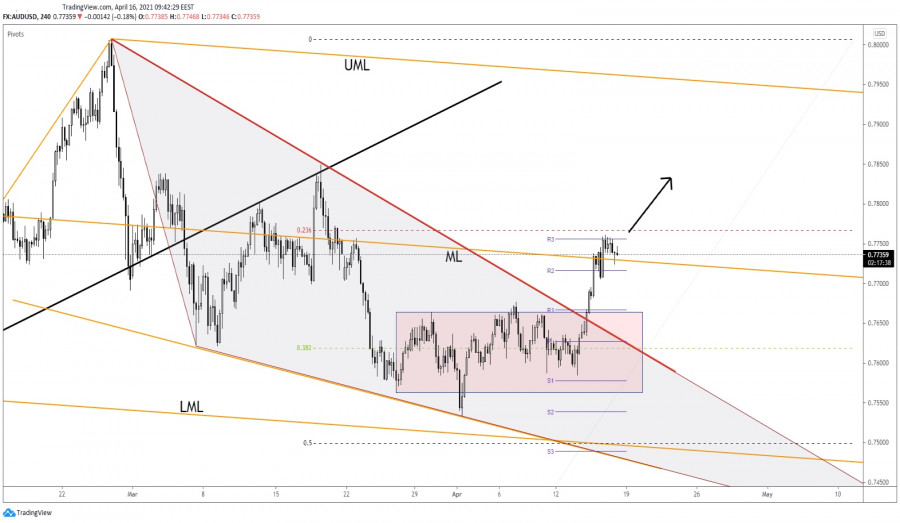 The pair ended its corrective phase after failing to reach the 50% retracement level. It’s a breakout above the red downtrend line and above the weekly R1 (0.7666) announced a strong swing higher.

Now is retesting the median line (ML) of the major descending pitchfork after being rejected by the R3 (0.7756).

On the other hand, dropping below 0.7705 former low could signal a deeper retreat in the short term.

A bullish closure above R3 (0.7756) on the H4 chart could represent a new bullish opportunity with a first upside target at 0.7800.