Gold trades at 1,762.93 level versus 1,769.66 yesterday’s high. The rate slips lower after registering an amazing rally. The yellow metal has jumped in the positive territory after a temporary decline signaling more gains.

The price has reached an upside target, that’s why the current decline is natural. It could test and retest the immediate support levels before resuming its upwards movement. Gold profits from USD decline and could approach and reach new highs. 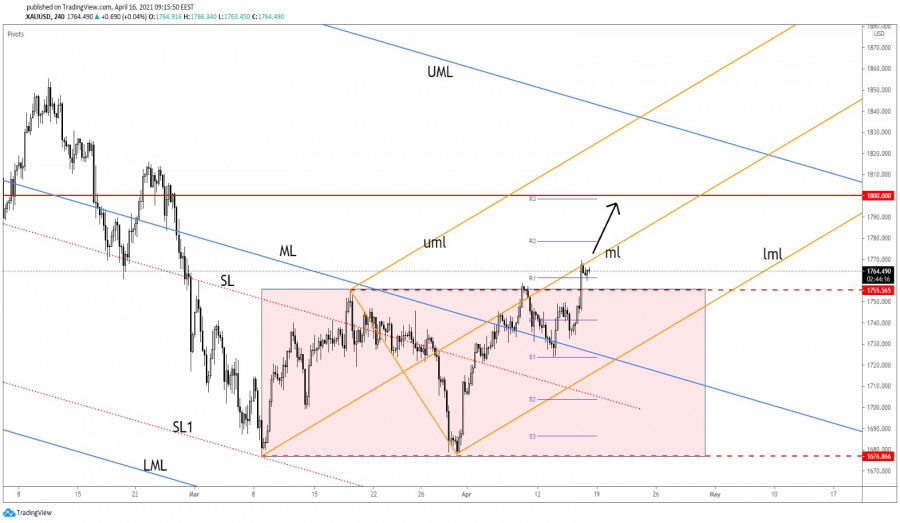 XAU/USD jumped above the 1,755 static resistance and now is located above the weekly R1 (1,761.29). The upside breakout from the major range signaled that the yellow metal could increase further.

The immediate resistance is represented by the median line (ml). XAU/USD has decreased after reaching this level. A valid breakout through this level could really confirm more gains.

The rate could increase even if it stays under the median line (ml). In the short term, gold could come back to retest 1,755 before jumping towards 1,800 psychological level.

Its failure to stabilize under the weekly Pivot Point (1,741) signaled strong buyers. Yesterday’s rally through 1,750 represented a buying opportunity. A minor consolidation above 1,755 could bring a new long signal.

Also, jumping and stabilizing above 1,769 yesterday’s high is seen as a buying opportunity as well. 1,800 is seen as the next upside target if the rate continues to increase.