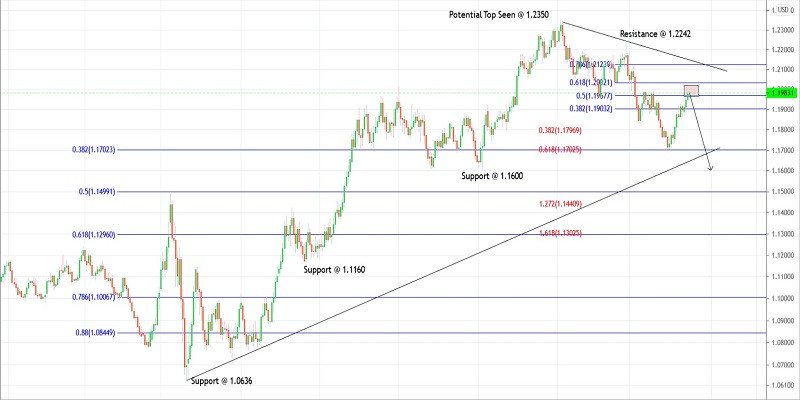 EURUSD has raised through 1.1992 levels as we prepare to publish today’s update. The rally has reached its peak, after having resumed from 1.1704 levels earlier. Also note that fibonacci 0.50 retracement of the recent swing between 1.2242 and 1.1704 has been met. A break below 1.1968 will confirm that EUR has carved a meaningful top and is ready to turn lower again.

EURUSD is seen to be trading around 1.1984 levels at this point in writing and is expected to turn lower from here. Also note that bulls have managed to take out resistance around 1.1985 levels today and a pullback could be due any moment. The next resistance is at 1.2242 mark while support comes in around 1.1880 (short term).

The wave structure might be indicating that EURUSD has carved a lower high around 1.1992 levels today. Bears could be back in control from here and drag prices lower towards 1.1600 at least. It might be safe to add short positions here with risk above 1.2242 levels and reward below 1.1600 respectively.