USD/CAD is trading in the red at 1.2514 level and it could approach and reach new lows after dropping below critical downside obstacles. Some poor US data reported today and better than expected Canadian figures could accelerate the sell-off.

Canada is to release the ADP Non-Farm Employment Claims Change and the Manufacturing Sales. On the other hand, the United States retail sales, Unemployment Claims, Capacity Utilization Rate, Industrial Production, and the Business Inventories could be decisive for USD and US Dollar Index.

The high-impact data could bring high volatility on USD/CAD in the US session, so you should be careful. 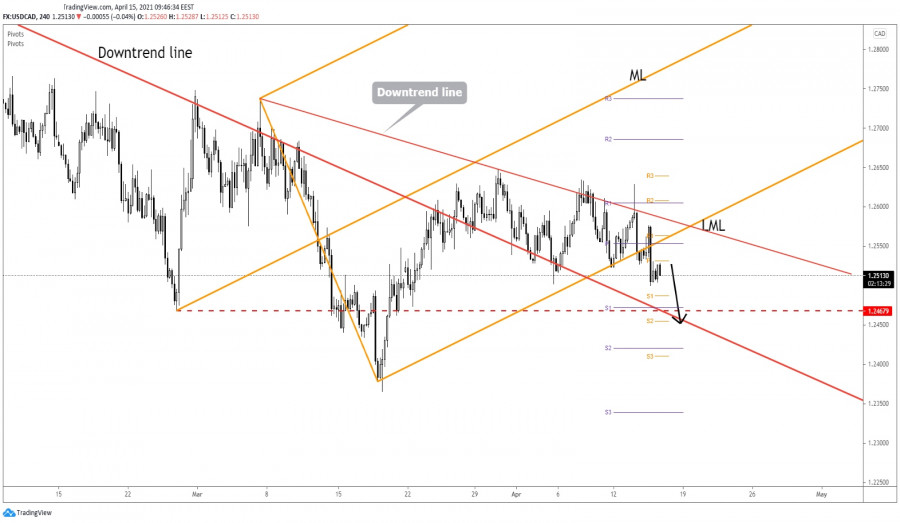 USD/CAD dropped below the lower median line (LML) of the ascending pitchfork after registering a new false breakout above the downtrend line. It’s located under the weekly and daily pivot points, so a deeper drop is expected.

The rate could approach and reach the major red downtrend line again after failing to validate a bullish reversal.

A bearish closure below 1.2500 psychological level and yesterday’s low could activate a further decline towards the weekly S1 (1.2472).

Yesterday’s aggressive breakdown through the lower median line (LML), the weekly pivot (1.2553), and below the daily pivot (1.2531) signaled strong sellers and a further decline ahead.

The bearish bias remains intact as long as the price is located under the red downtrend line. A new lower low, bearish closure below 1.2500 yesterday’s low is seen as a bearish signal.