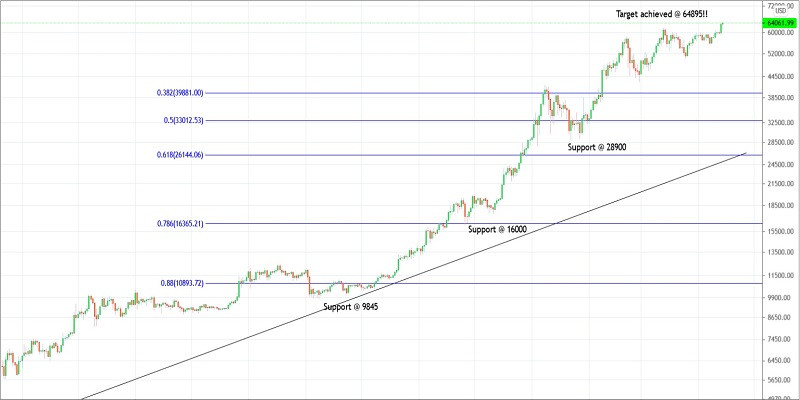 Bitcoin raises through fresh highs around $64,895 levels today before sharply reversing towards $61,400 intraday and then pulling back higher again. The crypto has swung over 6,500-7,000 points today until now as bulls approach a major resistance towards $72,000/73,000 mark. We had suggested yesterday to take maximum profits on the long positions taken earlier but another upside potential remains.

Bitcoin has pulled back from the highs and is seen to be trading close to $64,000 levels at this point in writing. Immediate resistance is above $73,000 mark now while support comes in at $55,000 levels respectively. A break below $55,000 will confirm that a meaningful top is in place and that bears are back in control.

Please note that Bitcoin remains poised for another rally towards $73,000 levels before finding strong resistance and reversing lower again. It is safe to remain long and exit any aggressive shorts initiated yesterday. There still remains something for bulls until prices stay above $55,000 levels, going further.