Bitcoin has increased as much as $64,896 today setting a new all-time high. The price is strongly bullish so it could reach fresh new highs if it closes above the new historical high.

As you already know from my analyses, BTC/USD was expected to jump higher after failing to reach and retest the immediate uptrend line in its last attempt. A minor retreat could help the buyers to catch a new upwards moment.

BTC/USD is traded at $64,514 at the time of writing and it stands below immediate obstacles. So, we cannot exclude a minor decline before resuming its major uptrend. 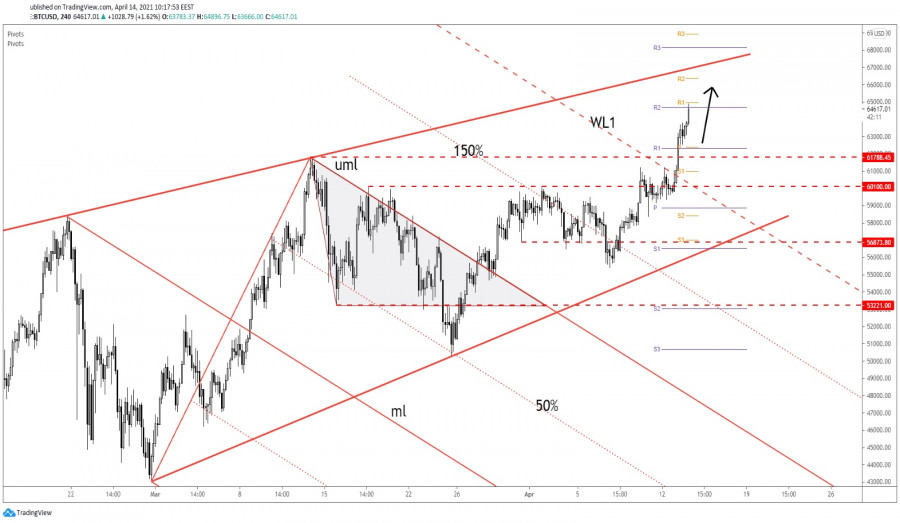 The upwards movement will be safe as long as the rate stays above $61,788 former all-time high. A temporary retreat could help us to catch a new upside momentum.

Also, jumping and closing above the $65,000 psychological level may signal further growth towards the red upside line.

The aggressive breakout through $61,788, the weekly R1 ($62,322), and above the daily pivot ($62,387) represented a buying signal. Now, consolidating above these broken levels could bring a new long opportunity.

Also, a valid breakout above $65,000 could bring a short-term buying signal with an immediate target at the Rising Wedge’s resistance.