For the last few weeks, the cryptocurrency market has managed to reach the $ 2 trillion mark in total capitalization. However, the main crypto asset only had a small contribution in setting a new record. It has been in the turbulence zone in the area of $ 55-60 thousand for almost a month, and on March 12, it finally managed to surpass this zone. At the same time, there are certain doubts about whether Bitcoin will be able to consolidate on an important mark and continue to rise.

And although the leading digital assent successfully broke through the $ 60 thousand over the weekend, its price has only risen by 0.8% on Sunday. Moreover, it is noteworthy that Bitcoin began to increase its daily trading volume, which may indicate an imminent growth. However, according to the dynamics of changes in quotes, it has been declining by 1.1%. Considering this data, we can say that Bitcoin has a chance to consolidate above the level of $ 60 thousand.

Analyzing the situation more broadly and deeply, it turns out that the BTC/USD pair is experiencing a noticeable downward movement in the retailers’ activity (following the institutions). This is due to the historical aspect that altcoins are much better at spending the second quarter annually. Due to this, the share of Bitcoin’s dominance in the crypto market continues to decline and has fallen by 1.5% throughout the previous week. 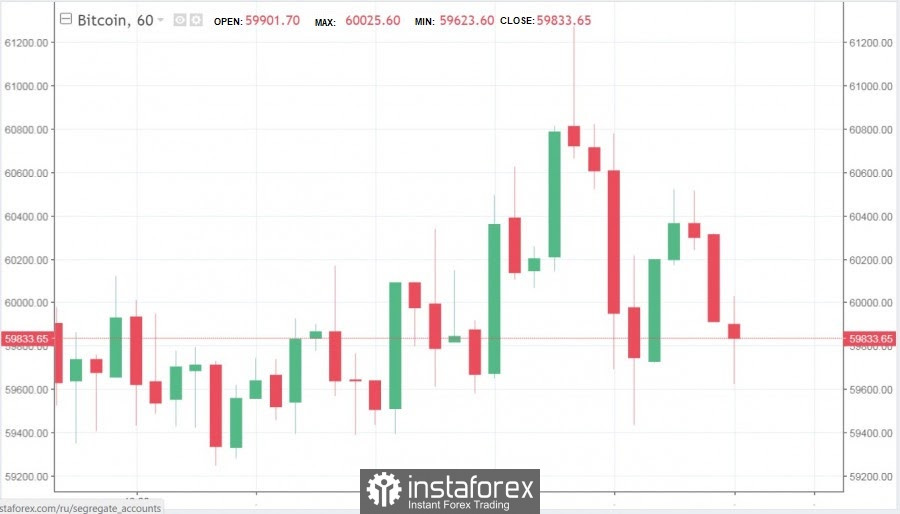 At the same time, there is a certain dissonance, given that a positive news background is necessary for the growth of asset quotes. For example, the CEO of the investment giant Ark Invest, Cathie Wood said that blockchain is the most promising type of innovation, which promises cryptocurrencies a big role in the future of the economy. However, the main dividends from the good news are received by altcoins, given their more preferred growth dynamics. In addition, it is worth noting that the main crypto asset has stopped reacting to the growth of quotes on positive news. Thus, it can be argued that Bitcoin has developed a certain immunity to impulse surge in price. On the one hand, this reduces the volatility of the asset, but on the other, it does not leave the cryptocurrency a room to grow.

The complete neutrality of large investors is another important factor. Companies are in stagnation while waiting for several positive impulses in stock markets, which began to go up amid the vaccination process. There are all the prerequisites for the fact that Bitcoin may lose some of the institutions that will go into stocks and bonds. In addition, large companies that store funds in the indicated cryptocurrency do not seek to transfer them to fiat, which eliminates the possibility of growth of the asset.

The current growth of bitcoin is associated solely with the positive dynamics of the market growth, which altcoins are pushing up. The local success of individual indicators of the BTC/USD pair will not be able to ensure stable growth of the asset. Most likely, Bitcoin’s indicators will return to the usual range of $ 55-$ 60 thousand until the situation on the stock markets is resolved and there is a really strong impulse specifically for the main cryptocurrency.