Gold plunged and it now stands at $1,725 level. The decline was somehow expected after reaching $1,755 static resistance. Technically, the retreat is natural after the most recent swing higher.

The yellow metal plunges even if the USD stays lower versus its rivals in the short term. It remains to see how the price will react after the US inflation data will be released.

Some poor US economic figures during the week should attract the buyers back on gold. Actually, the price of gold could turn to the upside again after ending its current temporary decline.

XAU/USD Turned To The Downside! 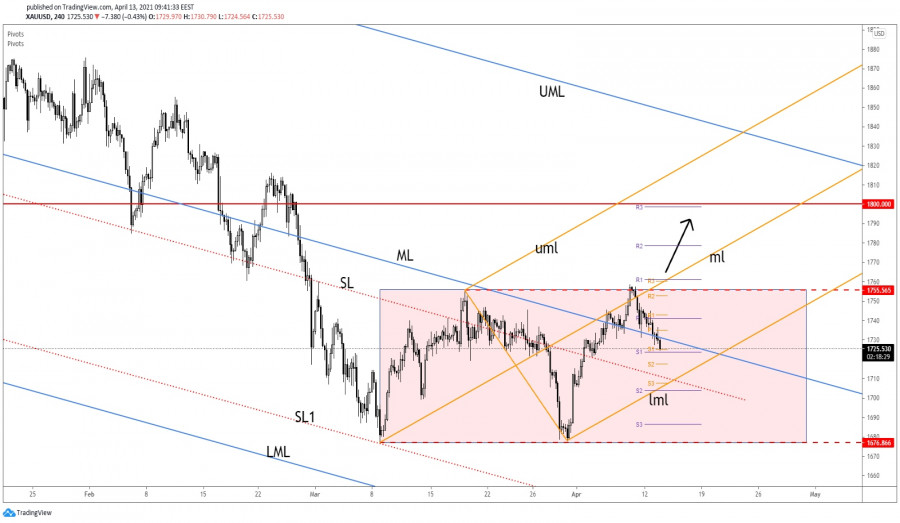 Gold has found resistance at $1,755 and right above the ascending pitchfork’s median line (ml). Now it flirts with the weekly S1 ($1,723) level, closing below it could signal a further decline towards the lower median line (lml).

The drop below the descending pitchfork’s median line (ML) signals that XAU/USD could approach also the inside sliding line (SL) if the USD starts increasing again.

Selling at this point is risky as the rate could jump higher anytime as long as it stays above the S1 ($1,723). Only a breakdown below the ascending pitchfork’s lower median line (lml) could really announce a deeper decline.

We could have a first long opportunity if the price comes back and stabilizes above the median line (ML) of the descending pitchfork. Still, a larger upwards movement will be confirmed by a valid breakout above $1,755.

A new higher high, jumping and closing above $1,758 could bring us a new long opportunity with a first target at $1,800.