Today’s article on USD/JPY will focus on technical analysis. Taking into account the trades that ended on Friday, let’s start the analysis from the weekly chart. 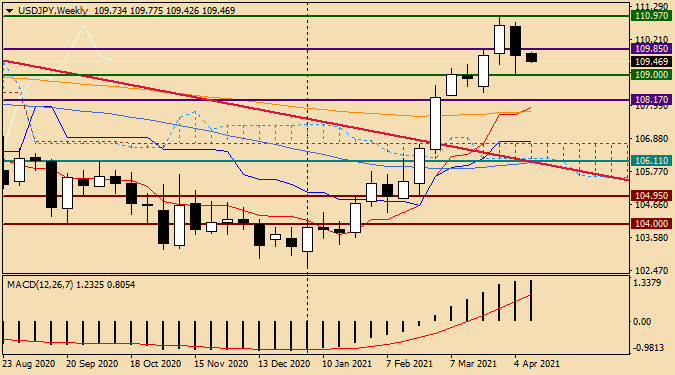 So, as suggested in one of the previous reviews on USD/JPY, the bulls will hardly succeed in overcoming the strong, important psychological and technical level of 110.00 on the first attempt. During the trading on April 5-9, this forecast was fully justified. Despite the reached heights of 110.97, which is significantly higher than 110.00, the pair turned down and completed the trading of the past five days at 109.65, losing 0.91%. Yes, the bulls fought as best they could, as indicated by the rather long lower shadow of the last candlestick. At the same time, it is typically the level of 109.00 that provides the pair with strong support and provoked a rebound upward. If you remember, this level was also noted as very difficult and quite strong. And once again it was confirmed.

Now about the further prospects of the USD/JPY price movement, judging by the weekly time frame. The priority of the bears will be the breakdown of the 109.00 mark with the obligatory closing of the current week below this level. If this condition is met, the pair’s downward dynamics will most likely continue, and the next target will be another strong support zone at 108.20-108.00. Given that the Tenkan line (red) and the orange 144 exponential moving average being slightly below 108.00, the pair could find strong support there. However, at this moment, it is too early to talk about it, let’s see how bears for USD/JPY cope with pushing through the level of 109.00. The bullish scenario will be reanimated only in the event of a breakdown of the sellers’ resistance at 110.97, or more simply put, bullish traders need to pass the 111.00 mark and close the weekly trades above this mark. These are the prospects of this trading instrument, judging by the weekly chart. 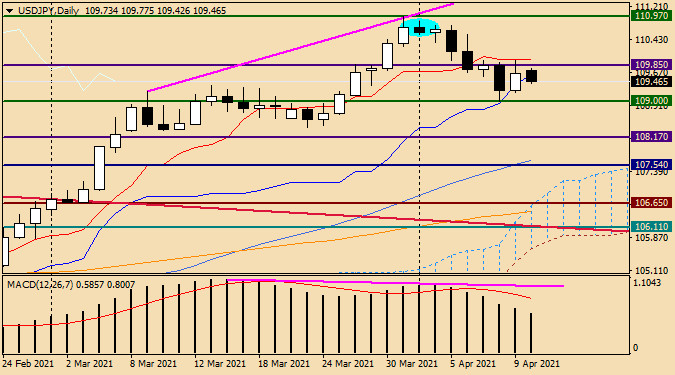 On the daily chart, the technical picture is also bearish. First, the circled candle for April 1 confirmed the inability of the bulls to overcome strong selling resistance near 111.00. Second, there is a bearish divergence of the MACD indicator on the daily chart, which is an additional signal for the implementation of a downward trend scenario. Taking into account the technical picture on the weekly and daily charts, the main trading recommendation for the USD/JPY pair is to sell after minor and short-term rises to the price zone of 110.00-110.20. More aggressive and early sales can be tried on the way to 109.80 or after a true breakdown of 109.50, on a pullback to this level. As for long positions, in order to open them, you need to enlist the support of the corresponding candlestick signals on the daily, four-hour, and (or) hourly charts after the pair’s decline to the nearest support zone, which passes at 109.00.