As already noted in today’s article on the euro/dollar, at last week’s trading, the British pound became the only one of all major currencies that declined against the US dollar. If you wish, you can find fundamental explanations for this outcome of trading on GBP/USD, refer to the external background and market sentiment. However, in my purely personal opinion, the technical picture that developed for the pound/dollar currency pair played a decisive role in the downward trading scenario on April 5-9. Moreover, the macroeconomic reports from the United Kingdom and the United States of America at the auction of the past five days came out mixed and very ambiguous. In such situations, statistics can be perceived and recouped by market participants in different ways. But as for the technical picture, everything is obvious. 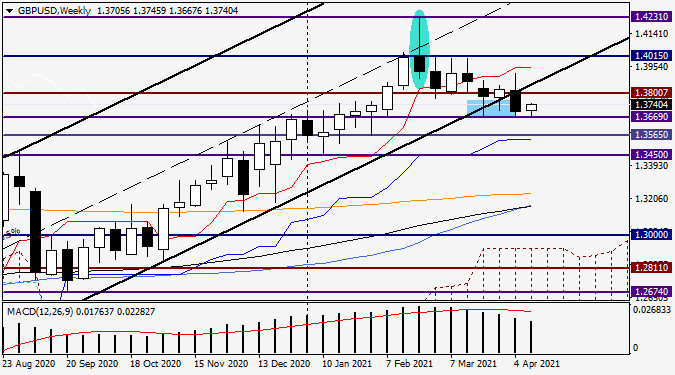 After the previous unsuccessful attempts of the bears to bring the price down from the ascending channel, last week, it was still possible to do this. However, I would like to draw attention to the fact that the pound is very fond of false breakouts, especially lines, so it is too early to make conclusions about the true breakdown of the channel support line. The pound/dollar pair may return to the channel limits or try to do so at this week’s trading. Nevertheless, several bearish factors indicate a high probability of a downward trading scenario on April 12-16. In particular, this is indicated by the previous candlesticks, which signal the difficulties of the bulls for the pound to continue the growth of the quote. It is worth paying attention to the consolidation of the course with three candles in a row under the red line of the Ichimoku Tenkan indicator, as well as the inability of players to overcome one of the most important and key psychological and technical levels of 1.4000. On the other hand, the support zone of 1.3700-1.3669, which largely determines the current situation, has not yet been broken, which means that it will continue to try to perform its functions to keep the price from further decline. The closing of the last weekly trading above 1.3700, namely at 1.3704, just indicates this factor. And yet, given the consolidation under the Tenkan and unsuccessful attempts to gain a foothold above 1.3800, they are more likely to lead to a bearish trading scenario for GBP/USD. If so, in the case of leaving under 1.3669, the decline will continue to the area of 1.3565-1.3545, where the level of 23.6 fibo from the growth of 1.1410-1.4231 and the blue line of the Kijun Ichimoku indicator pass. Important and key, at the moment, is the resistance zone of 1.3950-1.4015, where the red line is Tenkan and the strong level is the technical level. All this is visible on the chart. 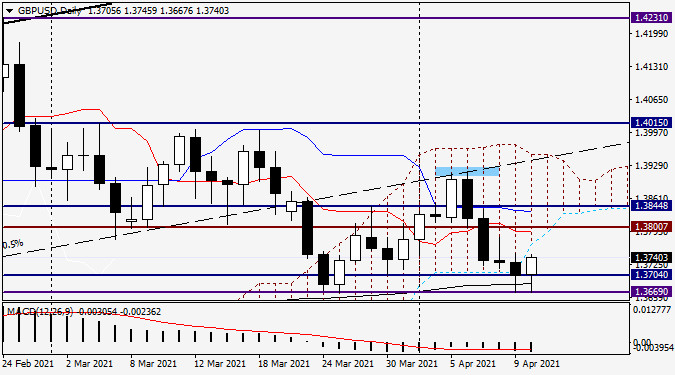 Despite the desperate attempts of the bulls to contain the decline in the exchange rate, on Friday, the pair still came down from the daily cloud of the Ichimoku indicator, closing trading under its lower border. The persistent struggle of the opposing sides is indicated by the long lower shadow of the candle for April 9, which was formed as a result of a rebound from the support level of 1.3669 and the black 89 exponential moving average. Due to the presence of this shadow, it is impossible to exclude attempts by the bulls for the pound to return the price to the cloud, although it will now be much more difficult to do this, because today the lower border of the cloud is already higher, near the strong technical level of 1.3770. Taking into account that the resistance level passes at 1.3780, and the red Tenkan line is located a little higher, the nearest resistance zone can be designated as 1.3776-1.3793. It is quite logical to assume that in the case of a rise in the designated area of prices, the pair will face strong resistance from sellers and will turn in the south direction, so the growth in the selected area can be used to open short positions. Another option for selling will be a true breakout of the 89 EMA and the support level of 1.3669. In such a trading scenario, after fixing at 1.3669, on a pullback to the price zone of 1.3665-1.3685, it is also worth considering options for selling, and the confirmation signal will be the appearance of bearish candle patterns on this or smaller timeframes, which we will analyze in detail in tomorrow’s review of GBP/USD. Purchases will become relevant if bullish patterns of Japanese candlesticks appear near the mark of 1.3700, however, we will also talk about this in tomorrow’s article. In the meantime, let’s see how the first trading day of the week will end.