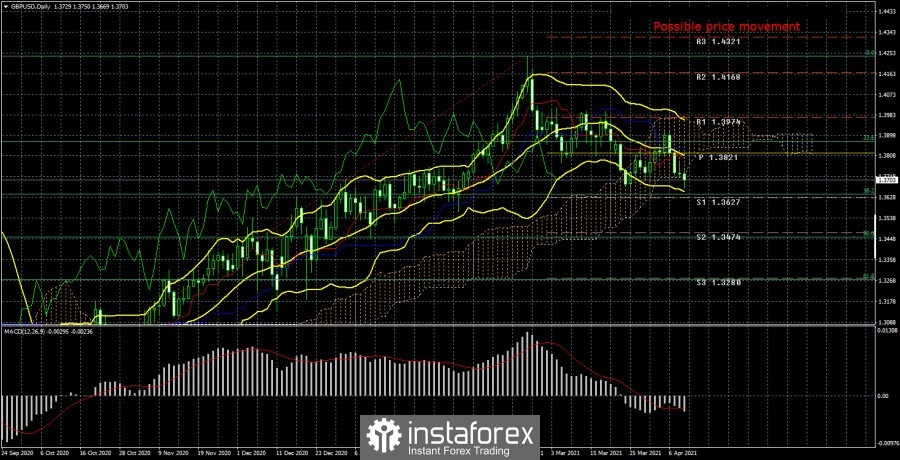 The GBP/USD currency pair has adjusted by 570 points over the past month as part of the correction that began on February 24. During the past week, the correction movement resumed and the pair added more to the previous figure – about 15 points. This is all you need to know about traders’ desire to sell the pound. Thus, the correction is still interpreted as very weak, since the entire upward trend was 2,800 points. That is, if the euro/dollar pair corrected by 36-37%, then the pound/dollar pair – by about 20%. These calculations allow us to draw the same conclusions as before. Market participants are still unwilling to get rid of the British currency. Perhaps the “speculative factor” remains at work, perhaps the factor of inflating the money supply in the United States has been added to it again. Thus, the pound, with a failed fundamental background from the UK over the past six months (a year or four years), managed to rise by 28 cents over the past 12 months and continues to remain close to its 3-year highs. Of course, the downward movement in the long term may continue, as the price this week fixed below the Senkou Span B line, which partly increases the likelihood of further movement to the south. However, given the current strength of the bears, it does not seem that the downward movement will be strong yet. We draw traders’ attention to the fact that the pound/dollar pair is now at a crossroads between several global factors, each of which has an impact: the inflated money supply factor in the US, the speculative factor, and the weak fundamental background factor in the UK. Therefore, there is no clear trend now. 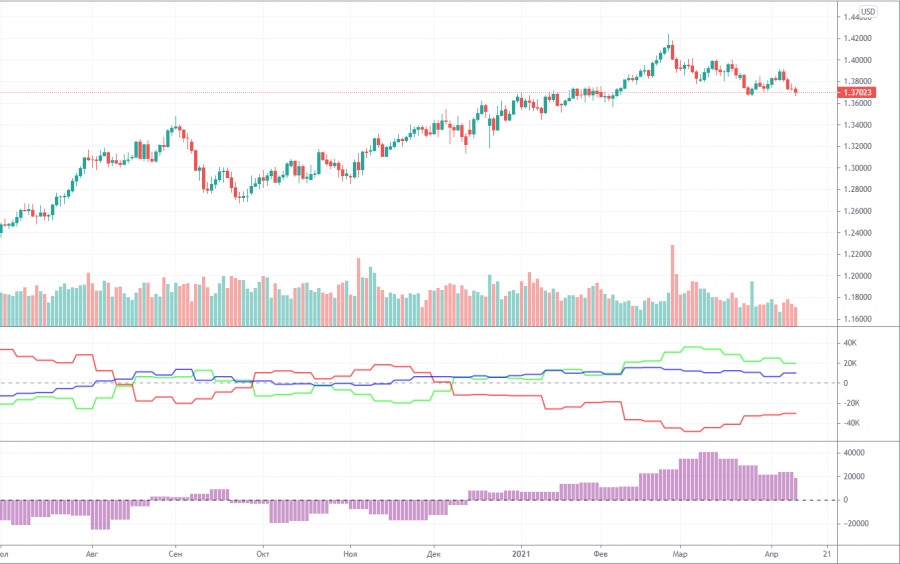 During the last reporting week (March 30-April 5), the GBP/USD pair increased by 140 points. The illustration above shows how strong the downward correction has been in the last month and a half. And the illustration doesn’t even fit the entire upward trend. Recent COT reports suggested that the mood of the “Non-commercial” group of traders is becoming moderately more “bearish”. The second indicator shows a steady decline in the net position of non-commercial traders. The green and red lines of the first indicator have been moving towards each other in recent weeks. However, we continue to note that before that, the green and red lines changed direction every couple of weeks, which indicates that the most important groups of traders do not have a single trading strategy. But at the same time, the pound continued to grow. It turns out that the data from the COT reports simply did not coincide with what is happening in the foreign exchange market for the pound/dollar pair. From our point of view, the inflating factor of the money supply in the United States worked here. Dollars simply became more, so the exchange rate of the US currency fell, and the major players could trade as they wanted. They simply did not have the same strong influence on the pair’s exchange rate as the US authorities, who poured trillions of dollars into the economy. We believe that we can see something similar this year, as the United States continues to saturate the economy with liquidity, and soon the Americans themselves may become more active, starting to get the money accumulated during the pandemic out from under the pillows. Thus, the COT report on the pound does not allow us to draw any long-term conclusions.

During the current week, only the indices of business activity in the services and construction sectors were published in the UK. They did not have any impact on the course of trading. Moreover, the euro and the pound in pairs with the dollar were traded in different directions, which raises many questions. Why was there a de-correlation, if there were no particularly important events either in the European Union or in Britain? If the euro is rising and the pound is falling, does this mean that there was a positive background in the European Union, and a negative background in Britain? But there is no good news in the European Union now, and in Britain – the negative background was formed 4 years ago, and in 2021 it only worsened. It turns out that the situation looks like this: the euro currency began to grow against the dollar based on the factor of new cash injections into the US economy, and the pound sterling continues to fall moderately, as speculators leave the market weakening the support of the British pound. We have no other explanation for what is happening.

1) The pound/dollar pair is trying its best to continue the downward trend. Thus, it will be possible to resume trading for an increase on the 24-hour timeframe not earlier than the price-fixing above the critical line. Last week, there was such an attempt, however, it failed. On lower timeframes, purchases can be considered when forming clear upward trends. Most of the fundamental factors now speak in favor of continuing to move down, however, the pound sterling stubbornly does not want to become cheaper, and the imbalance between the money supply of the United States and Britain, as well as the “speculative” factor, should be taken into account.

2) Sellers continue to take small steps in the direction of forming a new downward trend. At the moment, the chances of a further drop in quotes are still a little more. The nearest targets are the 1.3627 and 1.3474 levels. But the bears need to keep the pair below the Senkou Span B line (1.3712), the further prospects of the pound/dollar depend on this.