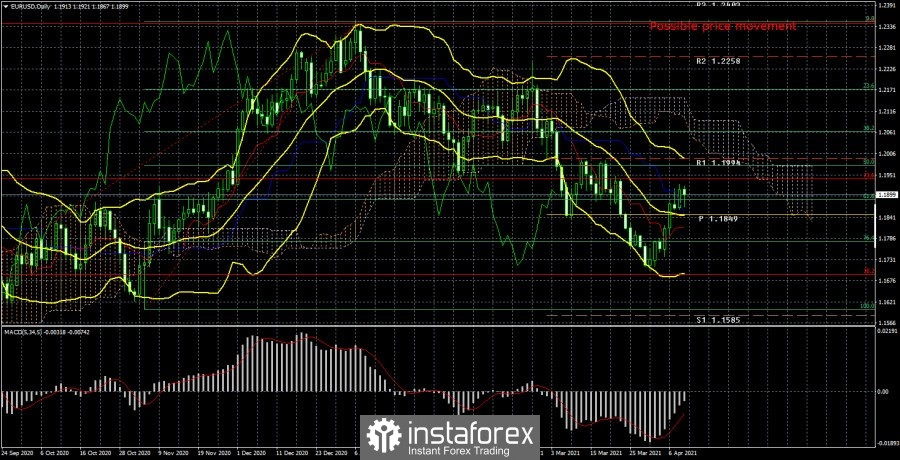 The EUR/USD currency pair has been trading higher over the past week. In general, the growth has been observed for eight working days and its consequence was the overcoming of the critical Kijun-sen line. Thus, from our point of view, the option of resuming the global upward trend after a three-month correction remains a priority. According to the Fibonacci data, the pair corrected for almost 38.2% of the entire trend that began last March, and for 85% against the last three-month round of the upward movement. In general, these figures allow us to count on the resumption of the campaign to the north. We are also starting from the fact that trillions of dollars continue to flow into the American economy, and this process is likely to continue in 2021 and 2022. At least, Jerome Powell, in a speech this week, said that so far there is no talk of curtailing or reducing the quantitative stimulus program. Thus, the global fundamental factor is on the side of the European currency, although the EU economy is recovering objectively more slowly than the US economy. And is it recovering at all? Next week, we expect the overall continuation of the upward movement. Of course, there may be a slight pullback down, however, we expect to see a continuation of growth to the 20th level and the Senkou Span B line, which lies at the level of 1.2091. Thus, the levels of 1.2000 and 1.2091 are the nearest target levels in the long term. 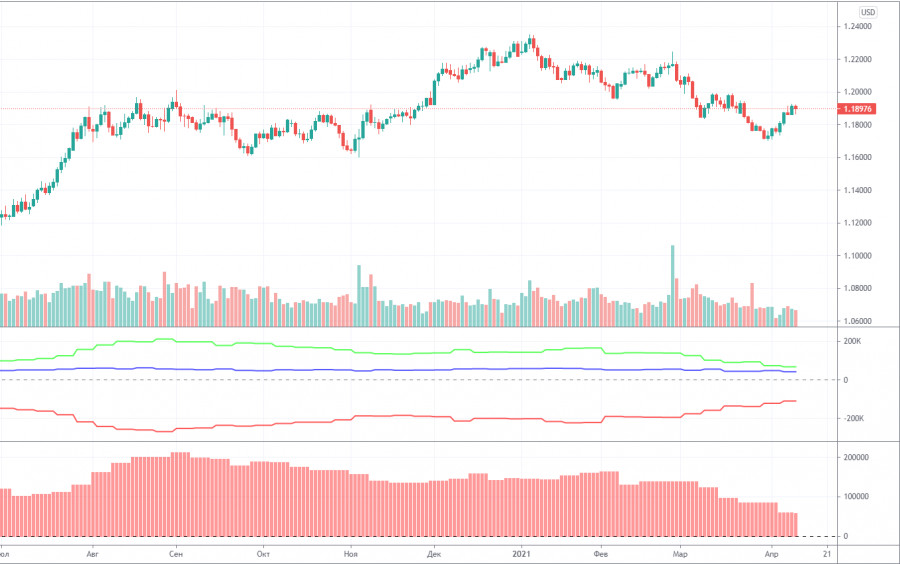 During the last reporting week (March 30-April 5), the EUR/USD pair increased by 50 points. However, what do the COT reports say about the prospects of the currency pair? Recall that all recent reports indicated a serious decrease in the number of contracts for the purchase of the group of “Non-commercial” traders, which is the most important category of participants in the foreign exchange market. So, non-profit traders in the last 5 weeks have closed about 35 thousand buy contracts and opened about 44 thousand sell contracts. Thus, in the last 5 weeks alone, the net position for professional players has decreased by almost 80,000 contracts. In principle, the second indicator in the illustration perfectly shows how the net position of large players has changed recently. This suggests that the mood of professional traders became more “bearish” because the total number of buy contracts still exceeded the total number of sell contracts. But if a couple of months ago we were talking about a three-fold gap in numbers, now the ratio is 187K-127K. Thus, if we take into account only the COT reports, we can conclude that the upward trend is over and we are waiting for a long strengthening of the US currency. The latest COT report, which was released on April 9, has become quite boring. The “Non-commercial” group closed 7,700 contracts for purchase and 6,700 contracts for sale. Thus, over the last reporting week, the mood of the major players has hardly changed. We remind you that the factor of the strongest inflation of the money supply in the United States can return the dollar to a fall, and this will not even depend on market participants. The dollar money supply will become many times larger, the supply of the US currency will increase, so even if traders do not sell the dollar, it can still fall.

The macroeconomic backdrop was extremely weak this week. During this period, a few reports were published, such as business activity indices, which traders were happy to ignore. The publication of the Fed minutes once again did not give any fundamentally new information and also did not cause any reaction. But this week there was a speech by Janet Yellen, who called for the introduction of a single corporate tax in all countries of the world to avoid the leakage of capital and the companies themselves from the United States. According to Janet Yellen, who was supported by the IMF and other rich countries, it has long been necessary to establish a single corporate tax for all, so that multi-corporations do not seek “tax havens” and do not evade taxes where they sell their goods or services. Of course, all the rich countries where taxes are a priori high immediately supported this initiative, although the US Treasury Secretary was hardly worried about the French budget or the Italian one. Thus, until this single tax is introduced, multi-corporations still have some time to “solve their brewing problems”. For some reason, we think that they will find a way out of this situation. At least just by increasing the prices of their products. So in the end, the final consumers will pay the corporate tax (they want to increase it to 28% in the US to finance a new $ 2.6 trillion stimulus package). That’s all.

1) On a 24-hour timeframe, the trend changes to an upward trend. At least, this conclusion can be made after the end of the week. The price has overcome the Kijun-sen, thus, the upward movement can continue with the targets of 1.2000 and 1.2091. If the pair’s quotes go back below the critical line, this may mean that the bulls are unable to move the pair up at this time and will cancel the option of going north and the relevance of long positions.

2) The downward trend has been temporarily reversed. We still believe that the US dollar does not have the support of global fundamentals, so it will not continue to grow in 2021. However, we remind you that any fundamental theory must be supported by technical factors. Therefore, for the time being, it is not recommended to trade down, since the pair has gone above the critical line.