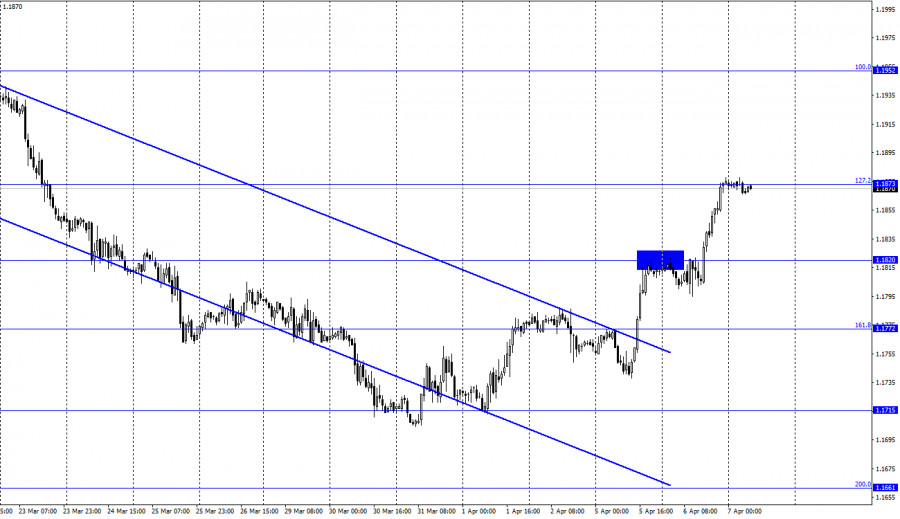 During the last trading day, the EUR/USD pair closed above the level of 1.1820 and rose to the next corrective level of 127.2% (1.1873). Thus, the rebound of the pair’s rate from this level will work in favor of the US currency and the beginning of the fall of quotes in the direction of the level of 1.1820. The consolidation of quotes above the level of 127.2% will increase the probability of continuing growth in the direction of the Fibo level of 100.0% (1.1952). The information background of yesterday was empty. During the day, only one more or less significant report was released. The unemployment rate in the European Union remained at the same level of 8.3%, while traders expected it to fall to 8.1%. However, as we can see, no pressure was created on the euro currency in this regard. Traders continued to buy the euro without worrying too much about the high unemployment rate in the EU, much higher than in the US. Thus, it seems that technical reasons have come to the fore. The chart shows that the pair has made an exit from the downward trend corridor, which means that the mood of traders has changed to “bullish”. It is this “bullish” mood that traders are now working out. Also yesterday, the International Monetary Fund updated its forecasts for the global economy for 2021. The IMF now expects 6% growth in the global economy. At the same time, according to the IMF report, developed countries will be able to get out of the crisis with almost minimal losses. Their economy will recover over the next year or two and reach pre-crisis levels. As for the United States, the IMF forecasts growth of 6.4% in 2021 and calls America the only country in the world whose production levels can reach pre-crisis levels and even higher this year. Thus, there is good news for the US economy, however, traders are now paying more attention to other factors. 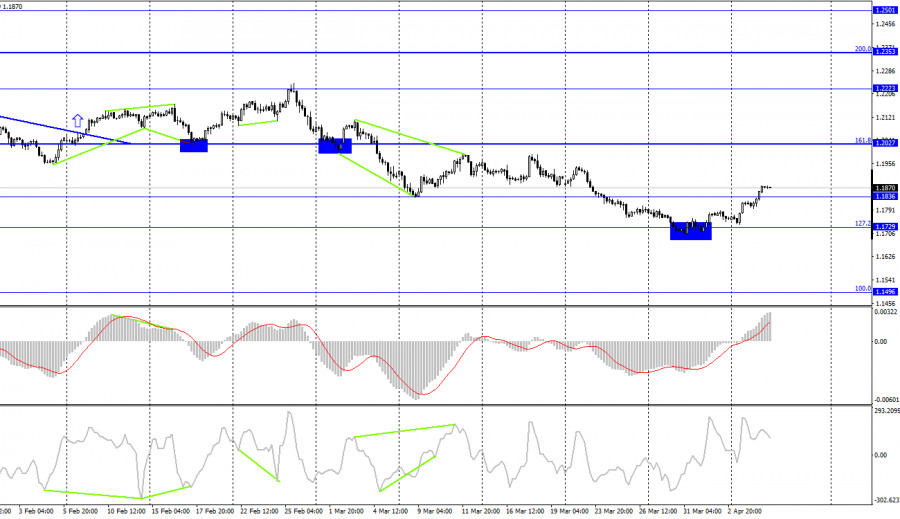 On the 4-hour chart, after rebounding from the Fibo level of 127.2% (1.1729), the pair’s quotes continue to grow in the direction of the corrective level of 161.8% (1.2027). Fixing the pair’s rate above the level of 1.1836 increases the chances of further growth. There are no emerging divergences in any indicator today. 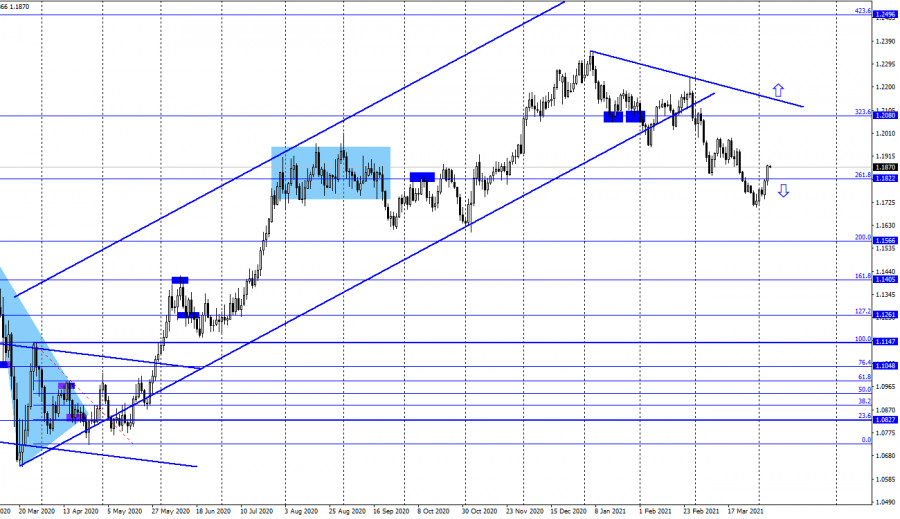 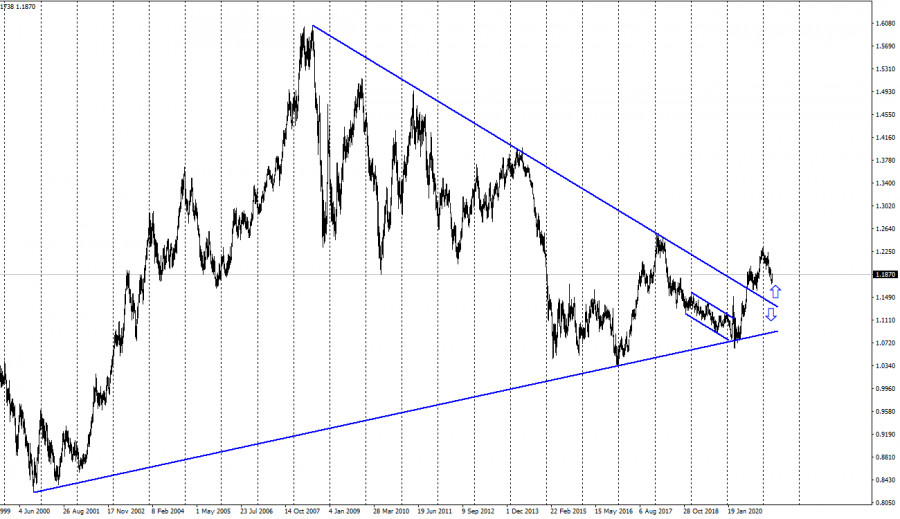 On April 6, the calendar of economic events in the European Union was almost empty, and in the United States – empty. But even on the reports and news that came out, there was no reaction from traders.

On April 7, the European Union will again release only one insignificant report on business activity, and in the United States – the publication of the minutes from the last FOMC meeting will take place. 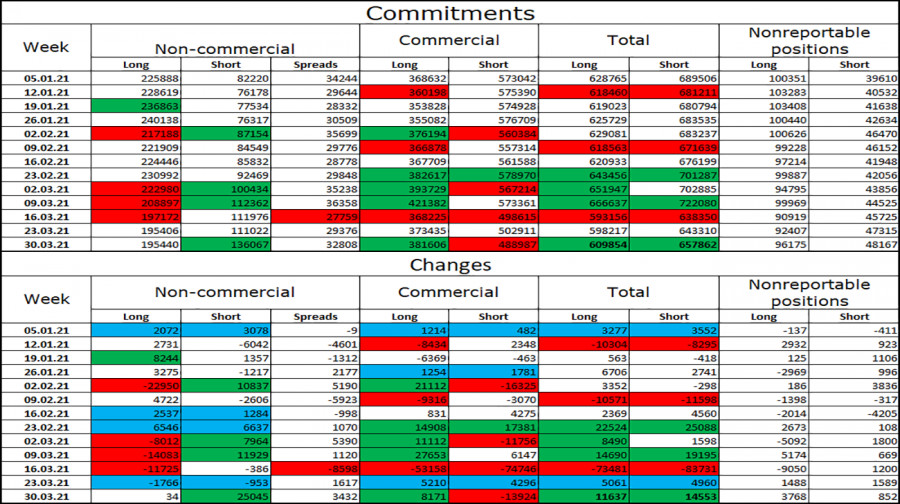 Last Friday, another COT report was released, which turned out to be “talking” this time. During the reporting week, traders of the “Non-commercial” category (the most important) opened 34 long contracts and 25,045 short contracts. Thus, even analyzing the behavior of speculators now makes no sense. Everything is clear enough. The mood of large traders continues to become more “bearish”, as evidenced by the regular increase in the number of short contracts and a decrease in the number of long contracts. Thus, in the perspective of the daily chart, the fall in the quotes of the euro/dollar pair may continue. But the new downward trend may turn out to be quite long, so do not expect a drop in the next few weeks by another 300-500 points. Everything will happen gradually.