The markets are consolidating in view of weak flow of macroeconomic data. On Tuesday, the US stock indices changed insignificantly, while the dynamics of prices for raw materials is almost absent.

The IMF raised its forecast for global growth to 6% (previously 5.5%), with the US as the main driver of the IMF, emphasizing that the US will be the only major economy to exceed the pre-pandemic level of production. This optimism is due to large-scale fiscal incentives, which in general, is not a secret to anyone.

Today, the minutes of the FOMC March meeting will be published, which will be interesting from the point of view of the discussion on the fate of the asset purchase program, but it is unlikely to have an impact on quotes, since a new stimulus package was adopted after the Fed meeting. Therefore, the value of which significantly exceeds everything that was discussed earlier.

We expect the US dollar to continue rising against most currencies today after the short period of consolidation is completed.

The net long position on CAD has become slightly stronger, with an increase of 111 million to 516 million for the week, but the estimated price is still higher than the long-term average and maintains an upward trend, which suggests that the bullish reversal has already taken place. 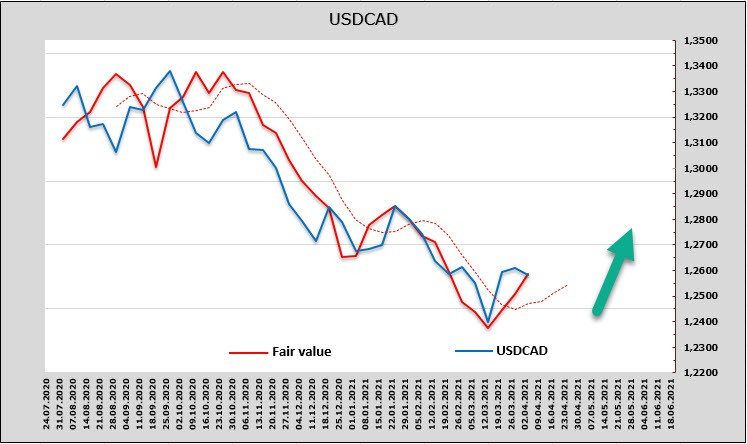 At the beginning of the week, we have an empty calendar for Canada. There are no internal drivers, so the Canadian dollar continues to be in the consolidation zone waiting for the publication of the employment report on Friday. New jobs are expected to increase by 100k, which is generally quite modest against the background of the lifting of some restrictions in March and the corresponding recovery in the service sector.

The Japanese yen formed an interim high at 111, after which it fell back as part of a correction. There are no reasons to consider this pullback as a large-scale bearish reversal, as the yen is still an outsider in a pair with the dollar and there are both external and internal reasons for this.

According to the CFTC report, the net short position rose by 576 million during the reporting week and reached -6.737 billion. The JPY looks significantly worse than any G10 currency. The growth of the estimated price has slowed down somewhat, primarily due to the completion of the rapid growth of UST yields, but it is still confidently higher than the long-term average. 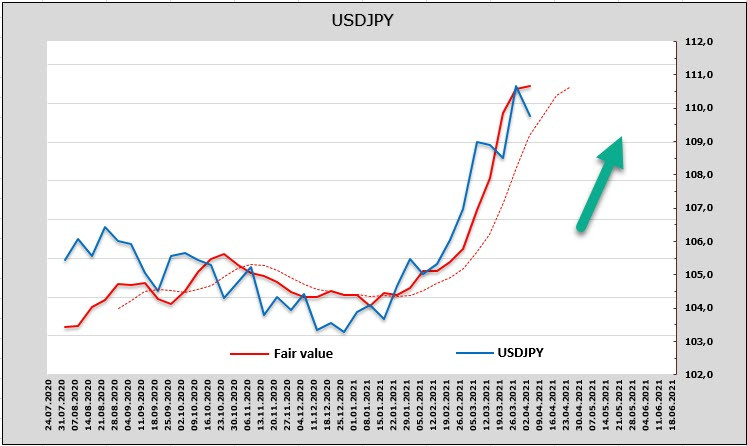 As for the internal reasons, everything is quite disappointing here. The Tankan indices published last week were generally slightly better than expected, but the barely visible positivity was completely erased by the report on household spending in February, which declined to -6.6 y/y. This is significantly worse than forecasts and indicates an increase in deflationary pressure.

Citing the difficulties associated with COVID-19, most large corporations decided not to increase wages, and all the efforts of the unions in the spring negotiations ended in nothing. It is expected that by the summer, bonus payments per employee will decrease. Mizuho Bank predicts a decline in payments by 5.1% , which will be the worst indicator since 2009 and certainly will not contribute to the growth of consumer demand.

The decline in domestic demand poses a problem of falling revenue for corporations. Meanwhile, the yen is noticeably above the break-even point. According to the January calculations of the Institute for Economic and Social Research under the Cabinet of Ministers, this point is at 99.8 yen per dollar, which means that the margin is quite high. In other words, the marked appreciation of the USD/JPY in January-March has already boosted exporters’ profits, but a return to break-even levels will create serious problems. 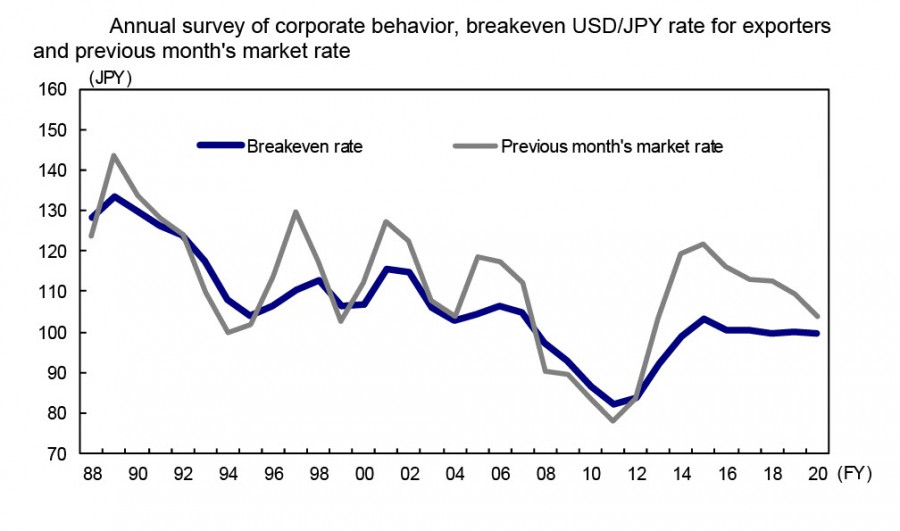 Although the situation looks stable, the decline in domestic demand is offset by the weakening of the yen and the growth of exporters’ profits. This means that the Bank of Japan’s intervention at this stage is unlikely, so the Japanese yen will be determined to a large extent by fluctuations in the demand for risk in the global market. So far, it can be assumed that the strengthening of the US dollar and the simultaneous growth in oil prices will pull the USD/JPY pair higher. The target is set at 112.20/40. The corrective decline may end at the support of 109.38 and 109.01.