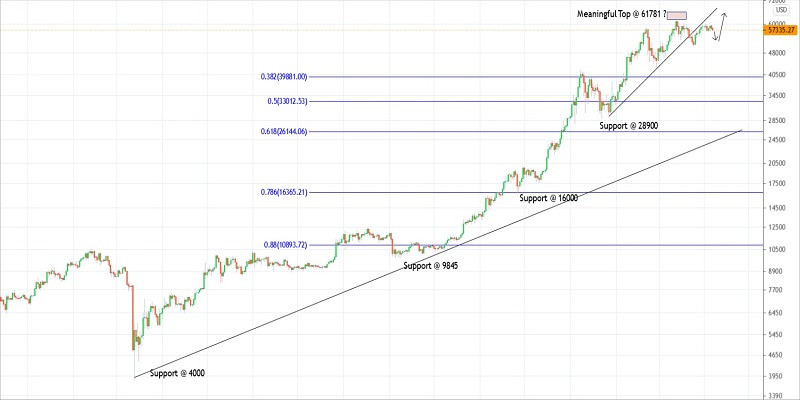 Bitcoin bears have managed to drag prices lower to $57,500 from the top of consolidation range around $59,000 levels, but it needs to break below $56,500 mark to reach $54,000 and find strong support. Thereafter, bulls are expected to be back in control and push prices higher towards $63,000 and above. The overall trend remains up but a corrective drop might materialize before a new high.

Bitcoin is seen to be trading near $57,500 levels at this point in writing and it could produce a swift drop towards $54,000/55,000 levels before reversing higher again. Immediate short term support is at $50,000, while intermediate resistance is seen towards $62,000 levels respectively. Also note that fibonacci 0.618 retracement of the recent rally between $50,300 and $60,000 is seen around $53,000/54,000 levels, hence probability of a bullish reversal remains high if prices manage to drop there.

Overall uptrend remains very much intact until prices stay above $50,000 mark, going forward. A break there would encourage bears to drag further towards $43,000 and $40,000 levels to find the next support. Also note that fibonacci 0.382 retracement of the entire rally between $3,850 and $61,780 is seen around $40,000 levels respectively. Bulls are expected to take control back if prices drop through that zone.