Overview of trade on Tuesday: 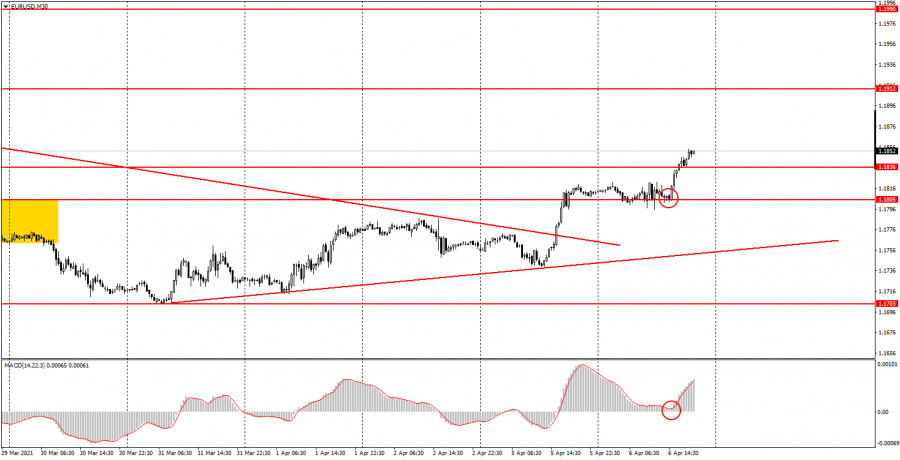 On Tuesday, EUR/USD was trading higher. Yesterday, the pair began an upward move with the price overcoming the downtrend line. Today, the climb is still going on. For the most part of the day, the pair was moving along the level of 1.1805. The price has not been able to fix below it and make a full-fledged correction. Moreover, no retracement signal was generated at about this level. If beginners look carefully at the price action at around this level, they will see that the price did not surpass this level. The bounce also did not happen as the price was treading water at this level for 10 hours. Thus, only one buy signal was formed today by MACD indicator. This signal is marked by a circle in the chart. Earlier, MACD indicator reversed upwards at the time when the pair was holding at around 1.1805. Hence, we are not going to consider this signal at all. The buy signal was obvious. After it had been formed, the price moved 35 pips upwards, thus enabling traders to earn 30 pips and more. Let me remind you that I recommend beginners placing Take Profit for EUR/USD 30-40 pips away from a market entry point. Today, the pair surpassed the level of 1.1836. So, logically it would be nice to keep long positions open over night. However, you would rather not do this as it is difficult to keep track of market moves at night. 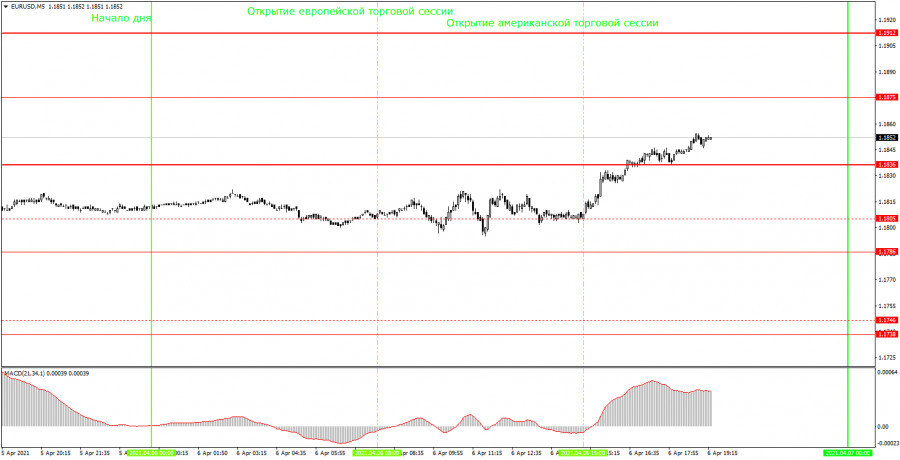 Now let’s look at a 5-minute chart. The pair was moving in a more complicated manner there than in a 30-minute chart. First, EUR/USD surpassed the level of 1.1805 a few times a day. This level is not so important in a 5-minute chart because a day ago the pair overcame this level easily. Second, it is obvious that EUR/USD was trading flat for the most part of the day. The pair entered the flat market on Monday.

The range-bound trading continued in the Asian and European sessions. The trading range was just 25 pips. Thus, in a 5-minute chart no signal appeared today which could be used to plan trading. Only by the end of the trading day, the pair surpassed 1.1836. Exactly the same signal was generated in a 1-hour chart when long positions had been already opened.

When it comes to the economic calendar, the only report was released in the EU. It was unemployment data that I didn’t present in the picture. Yesterday, I warned you that the market would hardly react to this report. This is what actually happened.

How to trade EUR/USD on Wednesday

On Wednesday, it would be a good idea to go long EUR/USD according to a 30-minute chart because the trend reversed upwards. The chart reveals a new uptrend line which cannot be called strong but it exists. At present, MACD has climbed to an elevated level and it has to be discharged before it generates new buy signals. Therefore, we have to wait until it declines to the zero level. This can happen late at night. The price has overcome the level of 1.1836, so we have got a new buy signal. If EUR/USD failed to fix below this level at night, this will set the stage for a further growth. As usual, let’s place Take Profit 30-40 pips away. Stop Loss is activated at breakeven when the price follows the right direction 15-20 pips. In a 5-minute chart, I’d like to point out the following levels: 1.1836, 1.1875, and 1.1912 from where the price might bounce off. The most important is to recognize a clear signal. If a signal is not so obvious, it would be better to stay away from the market.

What’s on the chart:

Support and Resistance levels are the levels that are targets when opening buy or sell orders. Take Profit levels can be placed near them.

Red lines are channels or trend lines that display the current trend and show which direction it is preferable to trade now.

MACD indicator (14,22,3) – a histogram and a signal line. When they are crossed, this signals a market entry. It is recommended for use in combination with trend patterns (channels, trend lines).

Important speeches and reports in the economic calendar can greatly influence the movement of the currency pair. Therefore, during their release, it is recommended to trade as carefully as possible or exit the market in order to avoid a sharp price reversal against the previous movement.

Beginners in the forex market should remember that every trade cannot be profitable. The development of a clear strategy and money management are the key to success in trading over a long period of time.