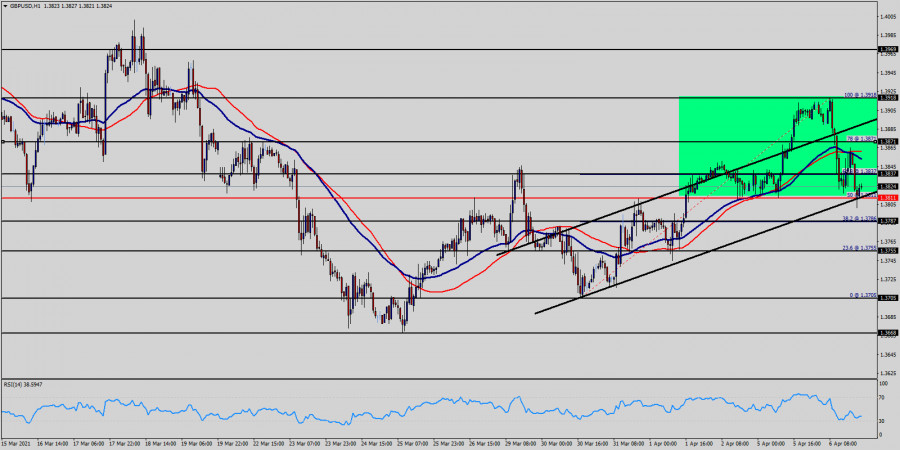 The GBP/USD pair broke resistance which turned to strong support at the level of 1.3806. The level of 1.3806 is expected to act as major support today. From this point, we expect the GBP/USD pair to continue moving in a bullish trend from the support levels of 1.3806 and 1.3907. Currently, the price is moving in a bullish channel. This is confirmed by the RSI indicator signaling that we are still in the bullish trending market. Consequently, the first support is set at the level of 1.3806 (horizontal green line). So, the market is likely to show signs of a bullish trend around the spot of 1.3806/1.3787. In other words, buy orders are recommended above the spot of 1.3806 or 1.3787 with the first target at the level of 1.3907; and continue towards 1.3940 (the weekly resistance 2). This would suggest a bearish market because the moving average (100) is still in a positive area and does not show any trend-reversal signs at the moment. On the other hand, if the GBP/USD pair fails to break through the resistance level of 1.3969 this week, the market will decline further to 1.3806. The pair is expected to drop lower towards at least 1.3806 with a view to test the weekly pivot point. Also, it should be noted that the weekly pivot point will act as minor support today. At the same time, if a breakout happens at the support levels of 1.3787, then this scenario may be invalidated. But in overall, we still prefer the bullish scenario.