The cryptocurrency market started the second quarter of 2021 on a positive note. The assets managed to approach their historic highs. However, compared to the performance of the main altcoins, the growth dynamics of bitcoin looks very uncertain. In late March, the cryptocurrency was close to setting a new all-time record. Bitcoin crossed the $60,000 mark but failed to consolidate there and then pulled back to the level of $57,000.

For more than a week, the asset has been in uncertainty, moving in the area of $57,000-60,000. Despite the rapid growth of certain altcoins and the overall positive dynamics of the crypto market, the BTC/USD pair does not show strong gains. Over the past day, the quotes have decreased by 0.2%, despite the relatively high trading volume of $46 billion. 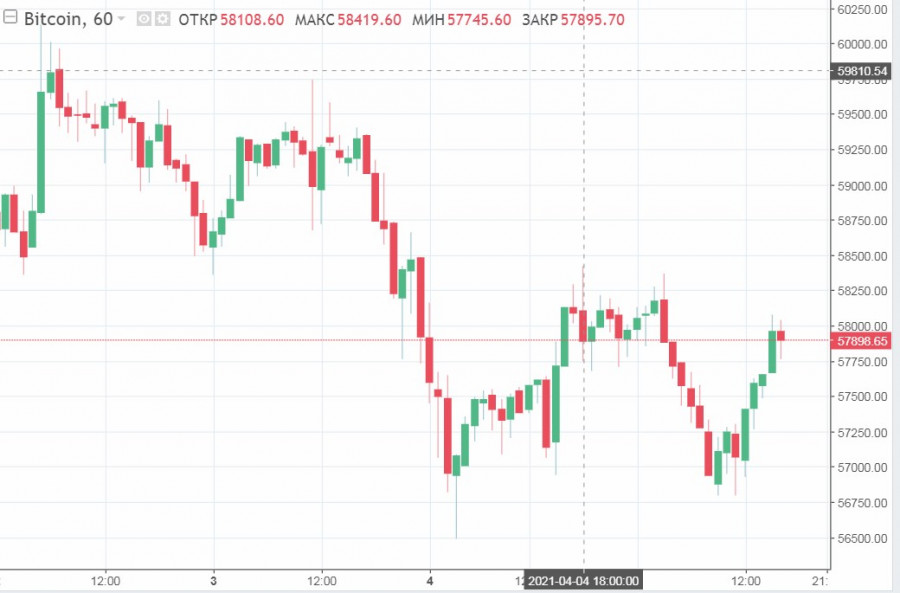 At this stage, bitcoin lacks a driver which could push its price up. The current BTC indicators show that the position of the asset in the market has stabilized compared to February-March 2021. The quotes remain at roughly the same level, and the cryptocurrency hardly reacts to news or favorable market fluctuations. This suggests that BTC has reduced its cyclical dependence on external factors and investor sentiment. Market participants, by the way, are in no hurry to withdraw their funds from the first digital asset, which also contributes to the cryptocurrency stabilization.

MicroStrategy’s statement could become a temporary driver, but it is not enough for bitcoin’s long-term growth. The largest BTC holder’s representatives announced that the company had purchased another 253 bitcoins worth $15 million. This news could help the first cryptocurrency overcome the challenging threshold of $60,000, but only in the short term. This is clearly not enough for a prolonged rally in the BTC/USD pair, even with increased interest from retail traders. Many experts are counting on an increase in the price of bitcoin after an important news release. However, judging by statements from Tesla, Visa, and PayPal, positive news is not enough for sustainable growth in the long run.

Statements by large companies without the approval and consolidation of market players do not bring bitcoin sustained upside momentum. Moreover, at this stage, a sharp rise in the asset’s quotes only increases its dependence on the sentiments of large companies. This allows the crypto asset to gain in value locally but deprives it of independence and weakens its own positions with consistent growth. Only in late March and early April, the tide began to turn.

As of April 5, bitcoin’s dynamics are rather stable. This makes the asset more attractive for major companies that want to save their funds from inflation. However, institutional investors lack the momentum necessary for a dizzying rally in the BTC/USD quotes. This is the main paradox as a buzz among retail traders caused by the inflow of capital will allow large companies to make local, albeit solid, profits. Institutional investors will not withdraw funds received from the cryptocurrency in order to prevent inflationary losses. Thus, an increase in the value of bitcoin depends on sellers (large companies), which are not interested in the first cryptocurrency’s growth under certain market conditions.

Despite positive news and the asset’s stable position in the market, there is no point in counting on new historical records soon. According to the current dynamics of BTC, demand for the first cryptocurrency and trading volumes will hardly change significantly in the near future. Large market players will most likely be waiting for news drivers that could point to bitcoin’s further upward movement or its correction.