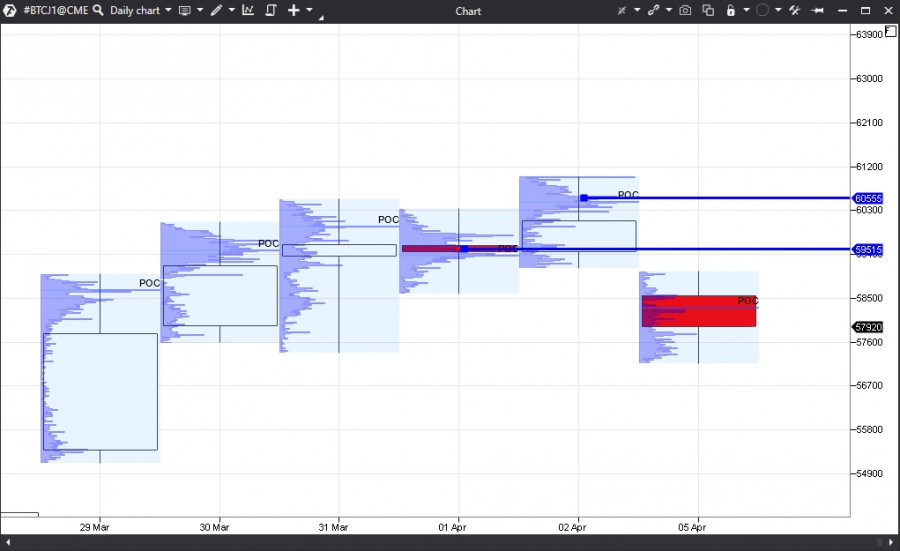 1. How to make money on cryptocurrencies?

– Testing time – last year. In order for the test results to be objective, a sufficiently long testing period is needed. One or two months is not enough. If you test Bitcoin during a strong upward trend, it will most likely be positive. It will still be a plus where you don’t buy. But when the flat starts, the whole picture will change dramatically. Therefore, you need to test at least 1 year of history, the test should contain at least 100 transactions, then the test can be called good. It takes such a long period to capture different phases of the market – flat trend, seasons, periods of holidays. And it is advisable to do a test of the last year, since later periods may not be so useful due to market volatility.

– Real test. You need to test the way it would be in real trading. “Do not see the future.” This means that you should not look at the chart ahead before opening a trade. Since the psyche is capable of deceiving us, if it will be seen that the deal is unprofitable, the trader can simply not include this deal in the test. And the test results will thus be distorted.

– Excel spreadsheet. A well-done test only makes sense if its results are well-documented. Do not rush anywhere while doing the test. A quality test saves you money. Therefore, in the table, enter all the data necessary for the analysis of the transaction: the price of entry into the market, the price of exit from the market, the volume of the transaction, the result in dollars, the result in points.

– Test analysis. This is the most important stage, as it will show the effectiveness and prospects of your trading system. Analyze how your deposit has changed, and build a capital curve. Calculate the main statistical indicators of the trading system: profit factor, Sharp coefficient, recovery factor, etc. Keep in mind that the test is an ideal condition, the results during trading can be twice as bad, that is, the system must have a margin of safety.

– Test check. And the last important step is to check your test after a while. After one or two months, when the first test is a little forgotten, retest the same section of the history. Then compare both tests. If there are few differences, then the testing can be considered over. And if the tests are very different, then you need to figure out why. Maybe the trading system is too complex and the rules are ambiguous. Then such a trading system needs to be improved.

During the holidays, bitcoin did not move upward (image at the beginning of the article). The side correction begins again. Perhaps we will see a picture of the end of 2017 and the beginning of 2018. First, a trampling at the top, and then a deep correction. So far, we can confidently talk about the absence of a trend and the beginning of a corridor in the market. Consider the levels of maximum horizontal volumes from the Chicago Mercantile Exchange. These volumes show the activity of major players.

The point of control went up, but the price failed to stay at this height. On the weekend, a correction began, and the price fell below both levels of the POC. The bears won the market, and in this situation, from the point of view of volume analysis, it is necessary to sell.

Trend trading is more stable and easier for the trader. The long-term trend is easier to determine, and trades opened on such a trend have a greater profit potential. These forecasts use an exponential moving average to analyze the trend: 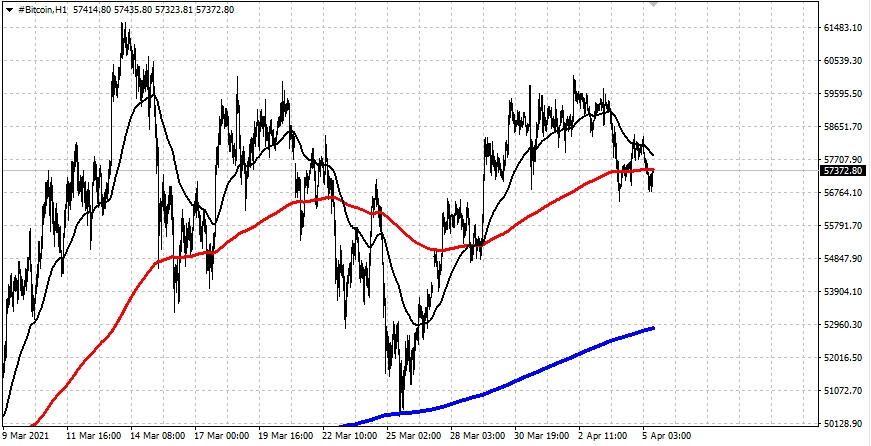 The upward trend is broken. The price has fallen below the EMA 48 and the EMA 288. The short-term and medium-term trends are already looking down, the long-term one is still up. There is no directional movement in the market, the trends look in different directions. In such a situation, you can consider both purchases and sales, from the point of view of trend analysis. 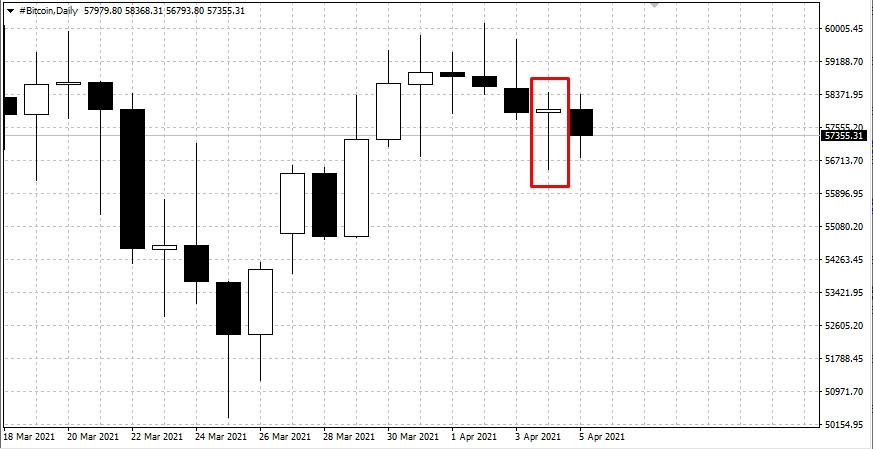 Yesterday’s candlestick is white, it closed upward. Candlestick configuration – Hammer pointing up, long lower shadow. Today, it is worth buying in terms of the Japanese candlestick analysis.

General conclusion: On April 5, 2021, you can buy and sell bitcoin in the short term, as different types of analysis give different forecasts, the market is flat. 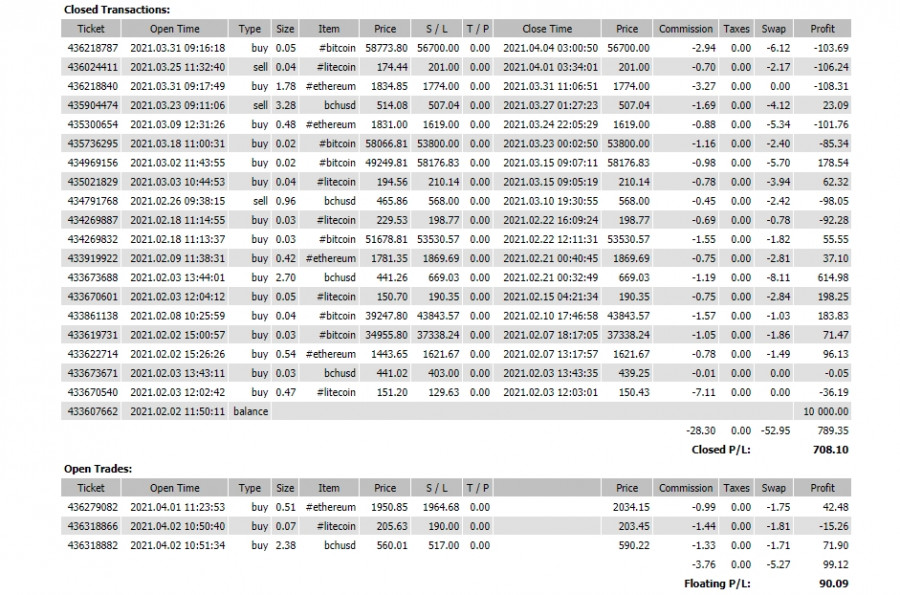 Today, I do not open new deals, as there is uncertainty in the market.

The risk per transaction is not more than 1%, this approach is safe. The Stop Loss for this system is set behind the low or high of the day, depending on the direction of the transaction. The profit is given the opportunity to grow without restrictions, since I do not set a take profit. I accompany the transaction by moving the Stop Loss beyond the extreme points of the upcoming sessions.

Since trading is conducted on daily charts, this recommendation is relevant throughout the day.

Trade on the trend, and you will gain profits!