As promised in the article on the euro/pound pair last Friday, today we return to the consideration of the main currency pair GBP/USD and conduct an analysis taking into account the completed weekly trading.

In today’s article on the euro/dollar, it was already noted that the main currencies at the auction of the past five days showed multidirectional dynamics against the US dollar. In particular, the British pound, unlike the single European currency, strengthened its position against the dollar by 0.24%. Of course, such an increase can not be called significant, however, there are some technical points that we will pay attention to later. For now, let us briefly talk about the fundamental component. I think it’s no secret that the main event of last week’s trading was the American labor reports published on April 2. I should immediately note that the data on the number of newly created jobs in the non-agricultural sectors of the US economy and the unemployment rate once again turned out to be quite strong and once again convinced market participants that the US economy is recovering faster than anyone else from the negative consequences of the COVID-19 pandemic.

This factor gives investors optimism about a faster normalization of the Fed’s monetary policy. In other words, if the trend of such a rapid recovery of the world’s largest economy continues, the Fed is the first of all the other leading world central banks to move to tighten monetary policy or to resume the process of raising interest rates in the United States. However, this requires that, in addition to all other positive components, inflation is firmly fixed at the target level of the regulator of 2% or slightly above it. But with this, according to the latest and very negative data on average hourly wage growth, there may be problems. Well, as they say: “We’ll wait and see.” Of the events that are planned for this week, it is certainly worth highlighting the publication of the minutes of the last FOMC meeting, as well as the PMI indices in the US and UK services sectors. Now it’s time to move on to the price charts, and given the Friday close of the last five-day trading session, let’s start with the weekly timeframe. 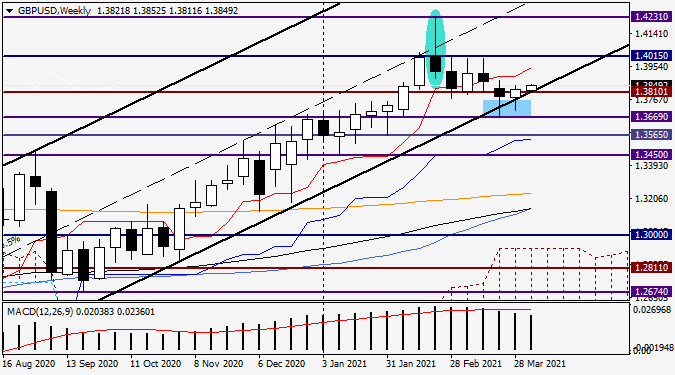 The first thing that catches your eye is the futile attempts of the pound bears to bring the price down from the ascending channel. As you can see, for two weeks in a row, there have been attempts to break through the support line of this channel, which at this stage of time continues to be an upward trend line. Since no weekly candle closed under the support line and only the tails of two candles remained, these attempts have the status of unsuccessful, which indicates the continuing bullish sentiment for GBP/USD. Nevertheless, until the pair has passed the red line of the Ichimoku Tenkan indicator and has not consolidated above the most important psychological and technical level of 1.4000, there is no confidence that sterling will continue to grow against the US dollar.

Thus, the further direction of the quote remains uncertain, even taking into account the closing of the last weekly trading above the significant technical level of 1.3800. It is reasonable to assume that following the results of the current weekly trading, the pound/dollar pair will finally signal its plans. Closing the week above 1.4000 will be a bullish signal and will allow us to hope for a subsequent rise to the area of 1.4230, with repeated testing for a breakdown of this strong resistance of sellers. If the weekly session ends at 1.3669, it will become clear that the pair is choosing the southern direction for its further price movement. These are the layouts, judging by the weekly timeframe. 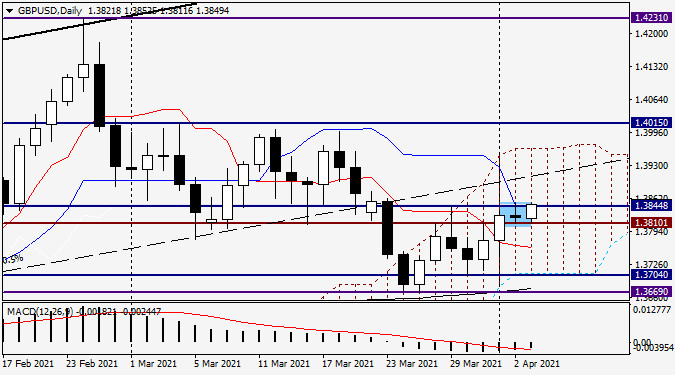 But on the daily chart, the picture is somewhat different. And at the time of completion of this article, it looks more bearish. In particular, this is indicated by the Doji Star candle, which appeared on this chart on April 2. Now, to prove their worth and confirm their ambitions, the pound bulls need to absorb the Friday candle with growth. They simply have no other way out. And as you can see, at the end of the article, the GBP/USD pair is showing growth and is aimed at another test for the breakdown of the strong resistance level of 1.3845, which has already twice repelled the attacks of players to increase the rate. This level is significantly enhanced by the nearby blue Kijun line of the Ichimoku indicator. If today’s trading closes above 1.3845, this will be a bell for further strengthening of the quote. The appearance of a bearish candlestick pattern with the closing price below the level of 1.3800 will be a signal for a possible decline in the exchange rate. Given the ambiguous technical picture on these two timeframes, I recommend that you take a wait-and-see position today and look at the formed candle and its closing price. In tomorrow’s article on this currency pair, we will look at smaller time intervals and try to find acceptable options for opening positions.