At the auction of the last five days, the main currencies against the US dollar were traded in different directions. Thus, the single European currency showed a decline of 0.35%. However, a very interesting candle appeared on the weekly chart. We will move on to the technical section of this article a little later. For now, we will summarize and analyze the main event of the previous week, which was the data on the US labor market for March. So, according to the US Department of Employment, the number of jobs created in non-agricultural sectors of the US economy amounted to 916 thousand last month, although the consensus forecast assumed the appearance of only 647 thousand new vacancies in the world’s largest economy. Moreover, the previous figure of 379,000 was revised upward to 468,000. This factor once again confirms the very high pace of recovery of the US economy from the COVID-19 pandemic and gives hope that the US Federal Reserve System (Fed) will begin to review its monetary policy in the direction of its tightening before the rest of the world’s leading central banks, in particular the ECB. Unemployment in the United States also fell at 6% last month, in line with market expectations.

Let me remind you that back in February, the unemployment rate in the United States was 6.2% and earlier 6.7%. Thus, we can conclude that this most important labor indicator is steadily declining, and this also indicates a high rate of recovery in the American labor market, and therefore in the entire economy. But the rise in average hourly wages has been the Fed’s headache. As you know, this indicator has a serious impact on inflationary pressure, and only if inflation is firmly fixed at the Fed’s target level of 2% or higher, it is more likely that the US regulator will raise the main interest rate. With a fairly modest forecast that average hourly wages will grow by 0.1% in March, the actual figure was at minus 0.1%. This factor is quite negative. I believe that it crossed out the strong reports on Nonfarm Payrolls, as well as the next round of decline in the unemployment rate. Now let’s turn to the price charts and start the analysis with the results of the completed five-day trading session. 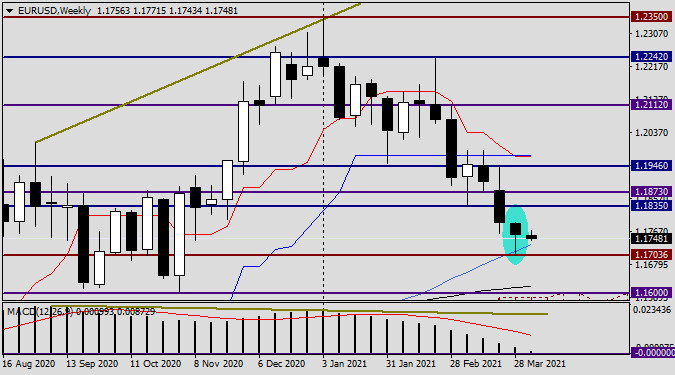 On the weekly timeframe, the strength and significance of the mark of 1.1700 mentioned more than once in previous materials is visible. It was after the decline to this level that the pair began to recover the losses incurred before. I also recommend paying attention to the 50 simple moving average, which is colored bluish on the chart. There is little doubt that the 50 MA has significantly strengthened the already strong level of 1.1700. In general, as a result of the rebound from 1.1700 and 50 MA, a candle with a long lower shadow appeared on the weekly chart, which is larger than the bearish body of the candle itself. I believe that we can talk about the appearance of a reversal model of the “hammer” candlestick analysis. If the market evaluates this as a reversal signal and begins to work it out, it is time to expect a rise in the quote, the nearest targets of which will be the previously broken support level of 1.1835 and the mark of 1.1873.

We will talk about higher goals if the market considers the last weekly candle to be a reversal candle and begins to work out this signal. Given that the current trend for EUR/USD is downward, I do not rule out further decline and absorption by the closing price of the previous “hammer” candle. To do this, the bears on the instrument simply need a confident close of weekly trading under the level of 1.1700. In this case, the decline of the euro/dollar will continue, and it is possible with a new force. However, it is worth noting that already at 1.1600, the pair may again find very strong support, especially since the black 89 exponential moving average passes slightly higher, which is also able to stop a possible price decline. And the upper border of the Ichimoku indicator cloud, which passes below 1.1600, should not be discounted. It can also provide the pair with quite strong support. 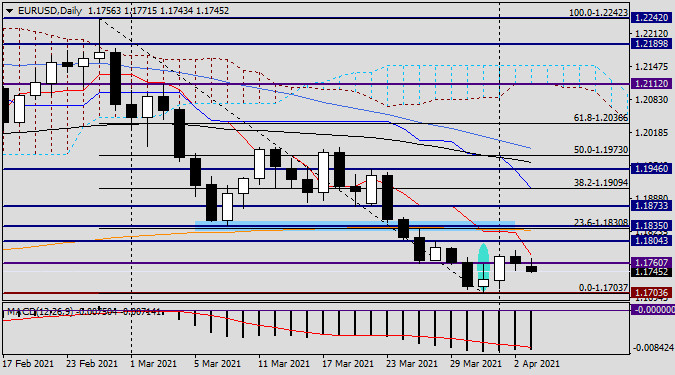 On the daily chart of EUR/USD, you should pay attention to the candles for March 30-31 and April 1. All of them together represent a reversal model of the “Morning Star” candle analysis. Let the appearance of this pattern look different than in book tutorials, however, its essence does not change from this. As we can see, after the formation of this model, growth did not take place, which is due to strong American labor reports except for wage growth. Well, how could you sell a dollar on such excellent payrolls? Nevertheless, Friday’s rise in the US currency on such good data on unemployment and the number of new jobs was much more modest than it could have been. I believe that market participants paid attention to the technical picture, in particular to the reversal model “Morning Star”.

Given the technical picture on both timeframes considered, I am inclined to conclude that the main currency pair has serious prerequisites for a corrective pullback. This means that there is a high probability that the euro/dollar will show growth in the starting week. However, do not forget about the option of bearish absorption of the last weekly candle. So, the main trading recommendation is still selling EUR/USD after corrective pullbacks to the price zones of 1.1820-1.1835 and 1.1860-1.1875. If on the daily or smaller charts, which we will consider in tomorrow’s article, reversal candle signals appear in the selected zones, this will become a technical justification for opening sell deals. For those who want to take a chance and try to buy a pair, I recommend not to rush yet. In tomorrow’s review, we will talk about this in more detail.