Last week’s main event was the publication of the US labor market report for March. For most indicators, the report turned out to be better than forecasted – 916 thousand new jobs were created. Considering the upward revision of the data for February and January, the increase amounted to 1.072 million, which is even higher than the most ambitious forecasts. At the same time, the unemployment rate declined from 6.2% to 6.0%, and the average working week rose from 34.6 to 34.9 hours.

It is possible that the only disappointment in the report is the slowdown in wage growth. Last month, the growth was 4.2% against the forecasted + 4.5%. The February data were revised downward from +5.3% to +5.2%, which should theoretically put pressure on inflation expectations due to a likely slowdown in consumer demand. However, the yield on inflation-protected TIPS bonds did not fall, with 5-year TIPS closing at 2.58% last Friday, which is just above 2.55% at the open. 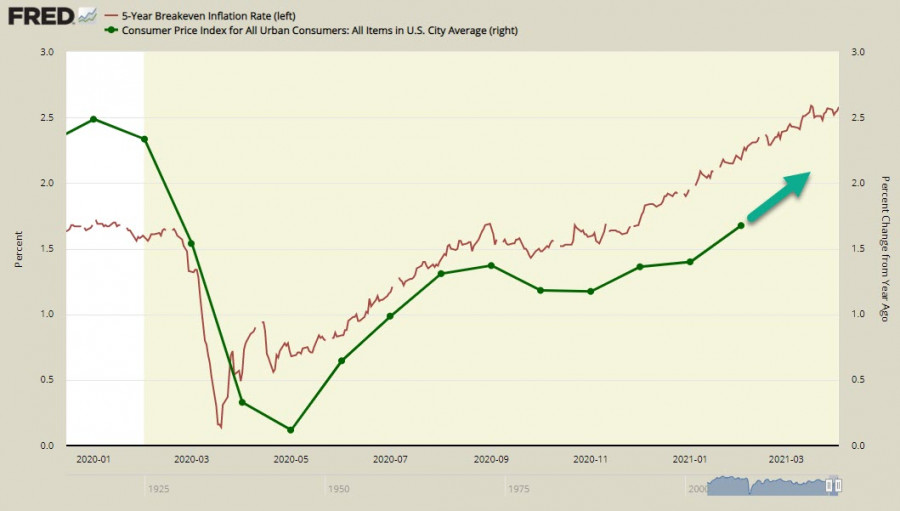 This indicates that business does not see the danger of inflation slowing down, but in contrast, it even expects its growth. Thus, this increases the chances of an earlier Fed rate hike. Such a scenario seems to be supported by the market, so the US dollar remains in favor for at least another week.

Today is an important day for assessing the prospects of the US economy. The main growth indicator – the ISM index for the service sector will be released. The forecast is 58.5p, which is significantly higher than the February 55.3p. In addition, we also expect growth from the employment sub-index. Last week, the ISM index in the manufacturing sector rose from 60.8 p to 64.7 p, which led to an increase in profitability due to an upward reassessment of the prospects. In this case, the index for the services sector can give an even greater surge in positivity, as Friday’s Nonfarm data showed an increase in employment by 597 thousand, which is quite significant.

On the other hand, the threat of a slowdown in employment growth remains insignificant. Based on March results, 8.4 million people who had jobs before the pandemic, but lost them, remain outside the labor force. The participation rate in the labor force is 61.5% against 63.3% before the pandemic, while underemployment is 10.7% against 7%. Taken together, the state of the US labor market provides solid potential for employment growth for at least another six months ahead.

There is low activity on European market because of religious holidays. Easter Monday replaced Good Friday, which partly explains the slow reaction of the markets to Nonfarm.

At the same time, economic factors capable of renewing interest in the euro are not observed, as the pace of economic recovery in the eurozone is not high enough. Italy and France have tightened restrictive measures due to the threat of a new wave of coronavirus. The Chancellor of Germany, Merkel, also said that its country is ready to do the same.

Euro’s sell-off in the futures markets continues at a high rate. The target price is noticeably below the long-term average, so a bullish reversal is not expected. 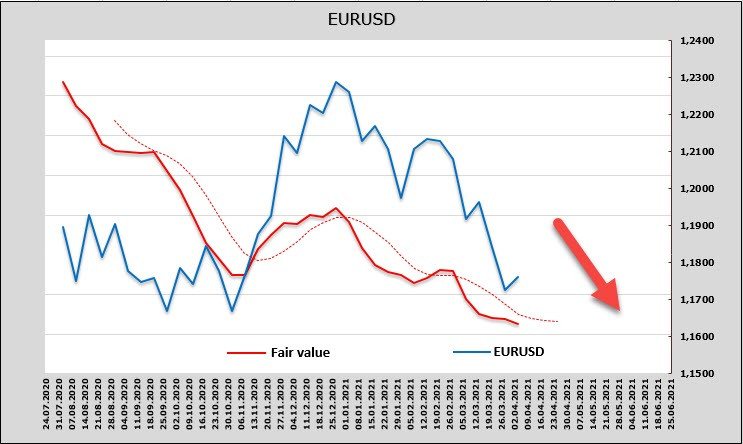 The Euro currency slowed down its decline around the support level of 1.1695, but there were no reasons why it should resist. The support level is expected to be tested successfully, which will lead to further decline to 1.1600.

The activity in the UK manufacturing sector grew faster than forecast, which is positive for the pound sterling, but that’s it. There is no news and the advantage in the rate of vaccination can be negated, since Boris Johnson has already publicly expressed concern about the growing incidence in France and suggested a new lockdown in the UK in 2-3 weeks. 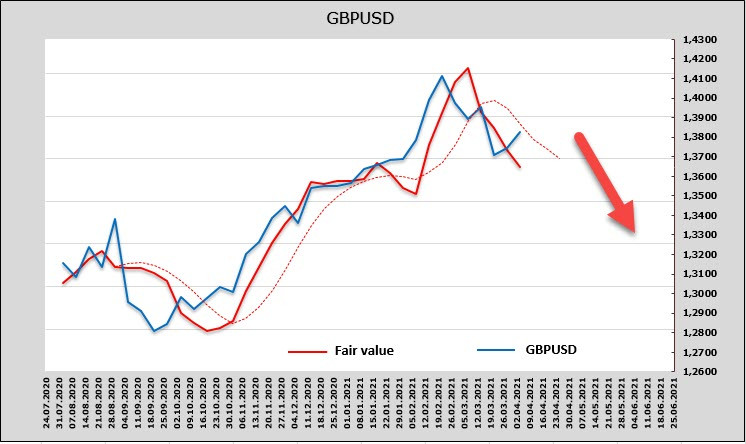 On Wednesday, we need to pay attention to the PMI for the services sector, but nothing more interesting can be expected after it. Therefore, the British pound will most likely drift in the wake of general market mood. An upward pullback to the resistance zone of 1.3845/55 provides a good opportunity to sell, as the target price is steadily declining, which indicates the direction of speculative financial flows. The long-term target of 1.3440/90 remains the same.