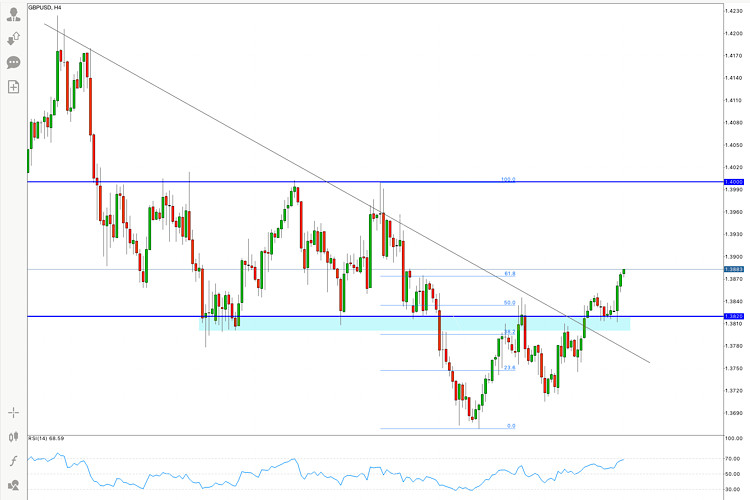 A sustained move beyond the 1.3830-35 confluence hurdle was seen as a key trigger that prompted some technical buying. On the 4-hour chart and the 38.2% Fibo. level of the 1.4002-1.3671 recent leg down, which should now act as a pivotal point for short-term traders.

The GBP/USD pair was last seen hovering near the 61.8% Fibo. level and a sustained move beyond will set the stage for an extension of the recent bounce from multi-week lows. That said, RSI (14) on 4-hourly charts has moved on the verge of breaking into the overbought zone and warrants some caution before positioning for any further appreciating move.

Meanwhile, some follow-through buying has the potential to lift the GBP/USD pair further beyond the 1.3900 mark, towards testing the next major hurdle near the 1.4000 mark.

On the flip side, the mentioned confluence resistance breakpoint, around the 1.3830-35 region now seems to protect the immediate downside. Failure to defend the mentioned support might prompt some technical selling and turn GBP/USD vulnerable to accelerate the slide to the 38.2% Fibo. level, around the 1.3800 mark.