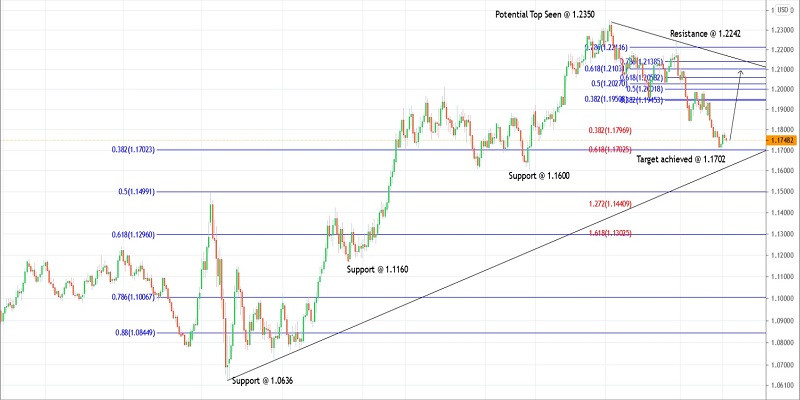 EURUSD is seen to be preparing for a meaningful counter trend rally after dropping through 1.1704 lows over the last week. High probabilities remain for a push through 1.1900 level at least, and up to 1.2040/50 over the next several trading sessions. Only a break above 1.2242 levels would indicate that bulls are pushing above 1.2350.

EURUSD is seen to be trading around 1.1751 levels at this point in writing and is expected to resume higher towards at least 1.1900/10 before finding resistance again. Immediate price resistance is seen at 1.2000, followed by 1.2242 and higher; while interim support is just below 1.1700 levels respectively. Bulls are poised to remain in control above 1.1700 levels going forward.

On the flip side, probability also remains for a continued drop towards 1.1600 mark before producing the counter trend rally. For this to turn out true, bears need to break below 1.1715 levels. A push above 1.1800 would raise probabilities for an interim bottom to be in place and that bulls would stay in control for the time being.