Ethereum is trading lower at 2,015 after failing to reach the 2,144 historical high in the most recent attempt. Still, the decline could be only a temporary one as the bias remains bullish despite a minor decline.

The crypto stands far above critical support levels, so it could resume its major uptrend after ending the current retreat. ETH/USD declines as the price of Bitcoin is trading in the red in the short-term. 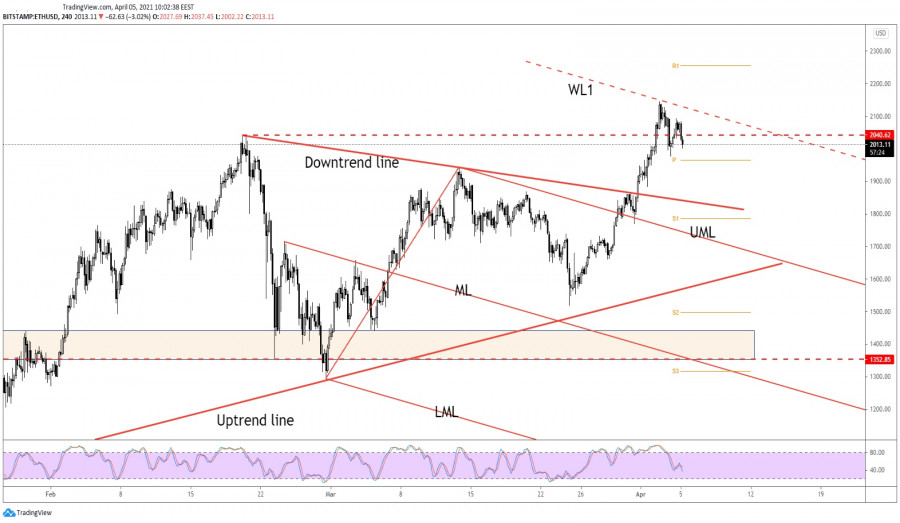 Ethereum is located right below 2,040 former historical high after its failure to reach and retest the first warning line (WL1). The immediate downside target is seen at the pivot point (1,965).

A valid breakdown below it could signal a further decline towards 1,900 and 1,800 psychological levels. Technically, the bias is bullish as long as the price stands above the pivot point, a false breakdown could bring a new long opportunity.

Actually, we’ll get a great buying signal if ETH/USD breaks above the first warning line (WL1).

Buy Ethereum if the price stays above the pivot point and if it makes a valid breakout above the first warning line (WL1). It could print a continuation pattern between right below the WL1.

The R1 (2,255) could be used as an upside target if ETH/USD continues to increase after the current decline.