Gold decreased a little after reaching 1,730 Friday’s high. The decline was expected after registering an amazing rally. Technically, the yellow metal could continue higher if it stabilizes above the broken obstacles.

The price bounced back from a major static support area and it could develop a double bottom reversal pattern. A temporary retreat, decline, could help the buyers to catch a new upwards momentum. 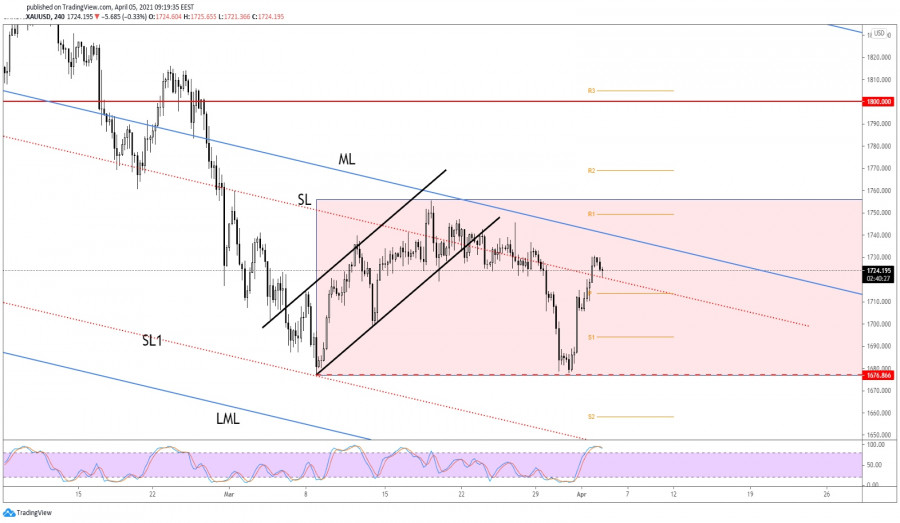 XAU/USD has found support on the 1,680 psychological level failing to reach and retest 1,676 lower low. Now is traded at 1,725 above the inside sliding parallel line and beyond the pivot point (1,713).

Personally, I would have liked to see a pivot point retest before resuming its upwards movement. Gold could slip lower if the USD continues to appreciate versus its rivals, so XAU/USD could still reach the pivot point.

Gold is trapped between 1,755 and 1,676 levels. We’ll have a great trading opportunity when the price escapes from this major range. The immediate upside target is seen at the major descending pitchfork’s median line (ML).

Jumping and stabilizing above the median line (ML) could send the rate above the R1 (1,749) and could bring an upside breakout from the mentioned range.

A false breakdown with great separation through the Pivot Point (1,713) or a new higher high, a bullish closure above 1,7130 could bring a new long opportunity. 1,755 could be used as an immediate upside target.

The upside scenario could be invalidated only by a drop and stabilization under the Pivot Point (1,713).