EUR/USD has rebounded in the short term but the outlook remains bearish. The bounce-back was somehow expected ahead of the US NFP and after the most recent sell-off.

As you know, the Non-Farm Payrolls showed an unexpectedly high reading of 916K in March versus 652K while economists predicted 468K in February. Moreover, the unemployment rate dropped from 6.2% to 6.0% as expected.

Surprisingly, the Average Hourly Earnings dropped by 0.1% even if the specialists have expected to see a 0.1% growth in March.

Today, the US is to release the ISM Services PMI which could increase from 55.3 to 58.3, the Final Services PMI, and the Factory Orders. In line with expectations figures or better could help the greenback to resume its growth. 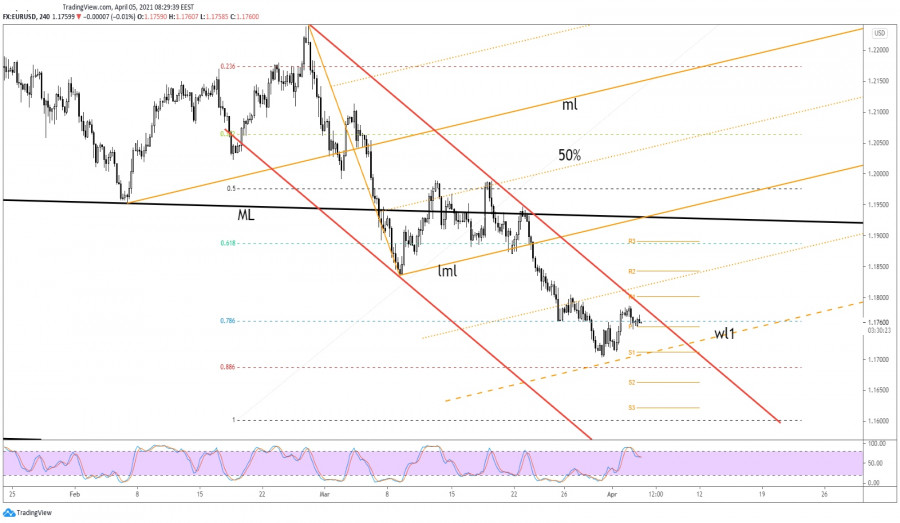 Last week I told you that the pressure remains high on EUR/USD as long as the rate stands within the descending channel’s body. It’s traded above the pivot point (1.1752) but it could drop below it soon if the USDX jumps higher.

Technically, EUR/USD is still expected to reach the ascending pitchfork’s first warning line (wl1) despite the minor rebound. Failing to reach the red downtrend line or a false breakout with great separation above it could bring a new bearish opportunity.

The bias remains bearish as long as EUR/USD stays within the down channel’s body, under the downtrend line. A bearish closure under 1.1749 is seen as a selling signal with a downside target at S1 (1.1711).