At yesterday’s trading, the pound/dollar currency pair ended with a downward trend, while it is possible to note some very interesting features of the price movement that took place on March 29. We will return to the technical part a little later. For now, there is a rather curious situation regarding COVID-19. Scientists from the World Health Organization (WHO) are due to present a report today on the origin of the coronavirus infection, which began in the Chinese city of Wuhan. So, according to WHO experts, the artificial origin of the coronavirus is not the main version. Scientists believe that COVID-19 was transmitted to humans from animals, in particular from badgers, minks, rabbits, and pangolins. I believe that this idea has a high probability of reliability, because in China, especially in its poorest parts, they eat everything in a row. What does this WHO report give and who makes it easier? At this stage of time – nothing and no one. Now the most urgent problem is the mass vaccination of the population to develop collective immunity and contain the spread of this infection. But with this, just in several regions, there are serious problems. However, this is hardly the case in the United Kingdom and the United States of America, where vaccination and its rates are considered more or less acceptable.

Looking at today’s economic calendar, you can find the absence of macroeconomic reports from the UK, and from the US, the attention of investors may be attracted by the consumer confidence indicator, which will be published at 15:00 London time. 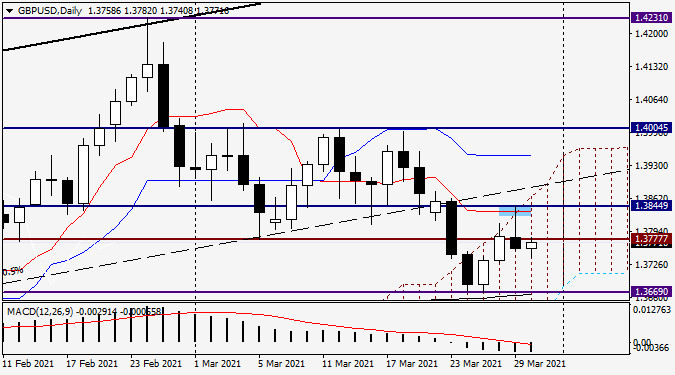 But now let’s return to the technical component and note the most significant points. At yesterday’s trading, the bulls on the pound made desperate attempts to bring the price up from the Ichimoku indicator cloud. The daily chart shows exactly what happened. And it turned out to form a bearish candle, which in its shape is very similar to the reversal model of the candle analysis “Shooting Star”. Even if this candle did not appear at the very end of the upward movement, however, it was formed when the price tried to exit the Ichimoku daily cloud, which is important and increases the chances of working out this model. In other words, after an unsuccessful attempt to bring the quote up from the cloud, the chances of a downward scenario for the GBP/USD pair increase significantly. It is especially worth noting that right on the upper border of the cloud, which the bulls on the pound failed to overcome, there is a red Tenkan line, which contributed to the resistance.

It is also necessary to emphasize the inability of players to increase the rate to return the price above the important and significant mark of 1.3800 and the support level of 1.3777. However, it is still too early to consider this level as truly broken, as the closing of three consecutive daily candles under it has not yet occurred. At the end of this article, the pair shows strengthening and is trading just near 1.3777. For the bulls to gain control of the pair, they need to update yesterday’s highs at 1.3844 and break through this resistance level, bringing the pair up from the same Ichimoku cloud. In my opinion, this is quite a difficult task, especially in the absence of a strong and significant driver for price movement. Based on all of the above, the main trading idea for the pound/dollar pair at this stage of time is sales, which are better considered after the pair tries to return above the mark of 1.3800. I consider the price zone of 1.3800-1.3840 to be a good option for sales, and the appearance of bearish candlestick analysis patterns on smaller time intervals: H4 and H1.