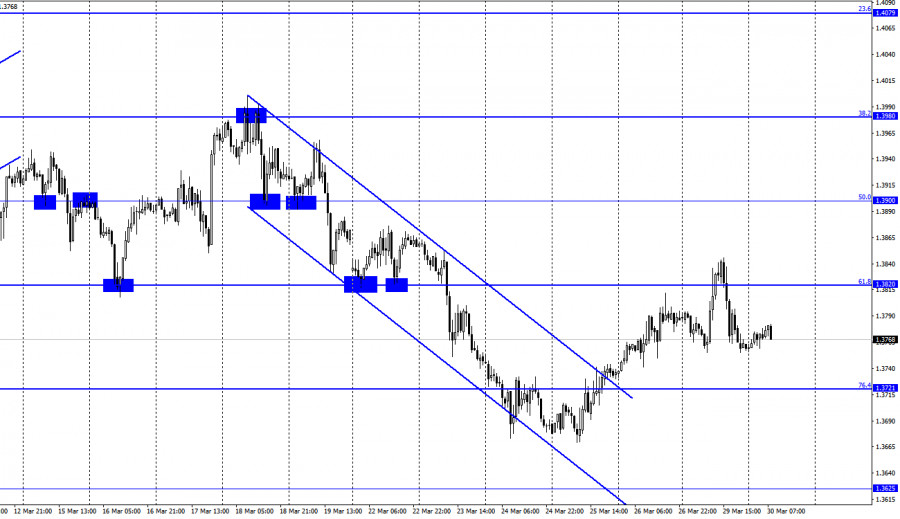 According to the hourly chart, the quotes of the GBP/USD pair moved quite cheerfully yesterday. At the beginning of the day, there was an upward turn and an increase to the corrective level of 61.8% (1.3820). Near this level, the pair turned sharply in favor of the US currency and began to fall in the direction of the Fibo level of 76.4% (1.3721). However, the information background could hardly be the reason for enough “fun trading”. The UK calendar was empty, and the European currency was trading very weak and sluggish all day. Although there is some positive news from Britain. Yesterday, March 29, the second phase of easing the quarantine began. Now residents of the country are allowed to meet in groups of 6 people, and various sports facilities are also opened.

Prime Minister Boris Johnson congratulated the British on the transition to the second phase of the easing of the quarantine but was reminded of caution. Johnson noted that, while the third wave of the epidemic is beginning in the European Union, the British can not feel calm and relaxed. As early as April 12, most pubs, shops, and hairdressers may open in the UK. Vaccination rates in the UK are among the highest in the world. About half of the population has already received the first vaccination against the coronavirus, and about 3.5 million people have received both doses of the vaccine. The rate of infection decreased to 5-6 thousand people per day. According to Boris Johnson, the greatest danger to the population now is the new strains of COVID, as they can be more contagious and more resistant to existing vaccines. So, despite the dismal economic performance, health care in Britain is finally doing well. This gives hope for an acceleration in the pace of economic recovery in the coming months. 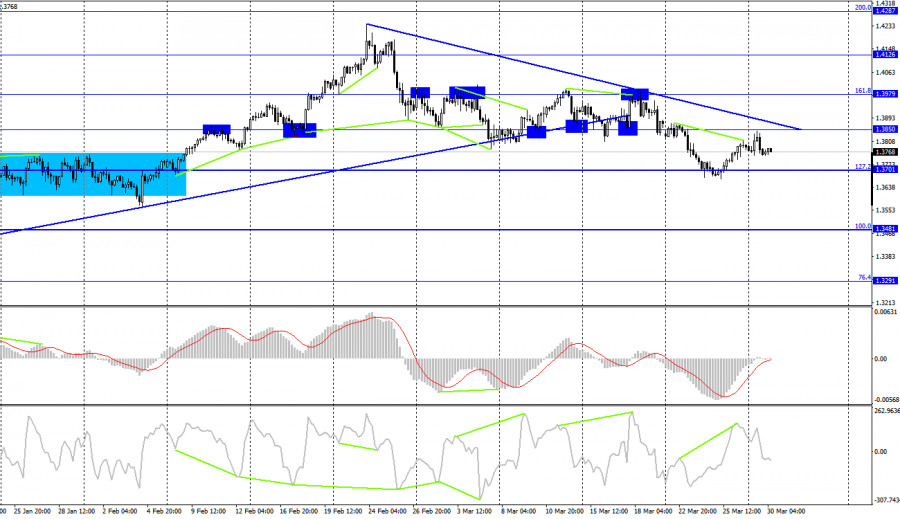 On the 4-hour chart, the GBP/USD pair performed an increase to the level of 1.3850, however, there was no rebound from this level. The pair performed a reversal in favor of the US currency and began the process of falling in the direction of the corrective level of 127.2% (1.3701). The downward trend line keeps the current mood of traders “bearish”. There are no emerging divergences in any indicator today. 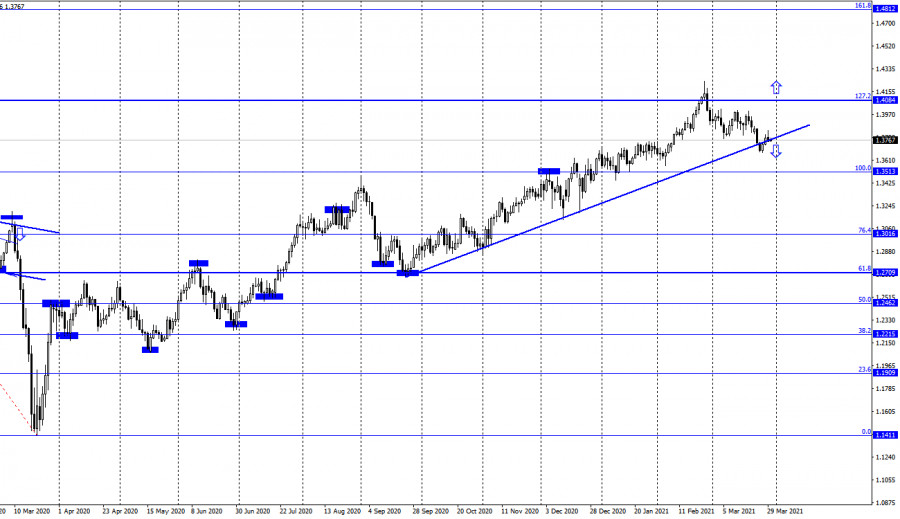 On the daily chart, the pair’s quotes closed under the ascending trend line. Thus, in the long term, the “bullish” mood of traders has changed to “bearish”. This is an important point for the prospects of the British currency. 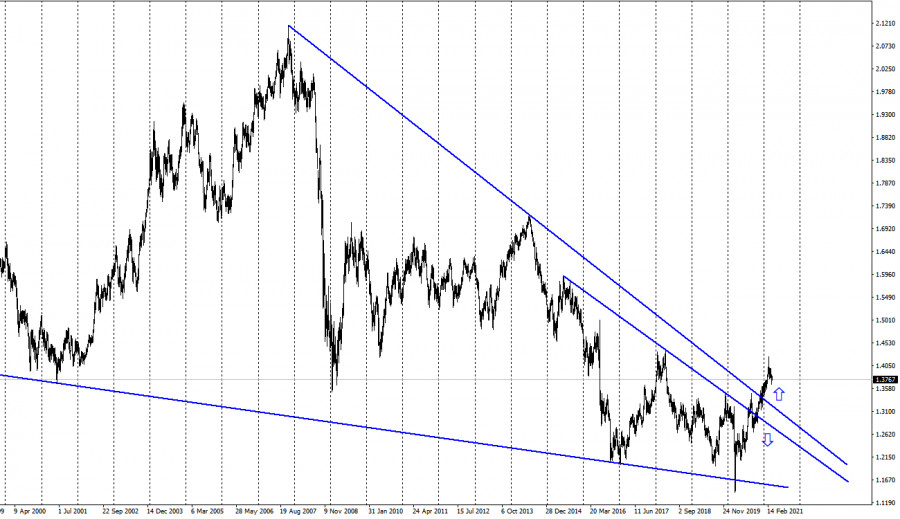 There were no major reports or events in the UK and US on Monday. The information background was absent yesterday.

On Tuesday, the calendars of economic events in the UK and America are almost empty again. Thus, the information background will be absent today. 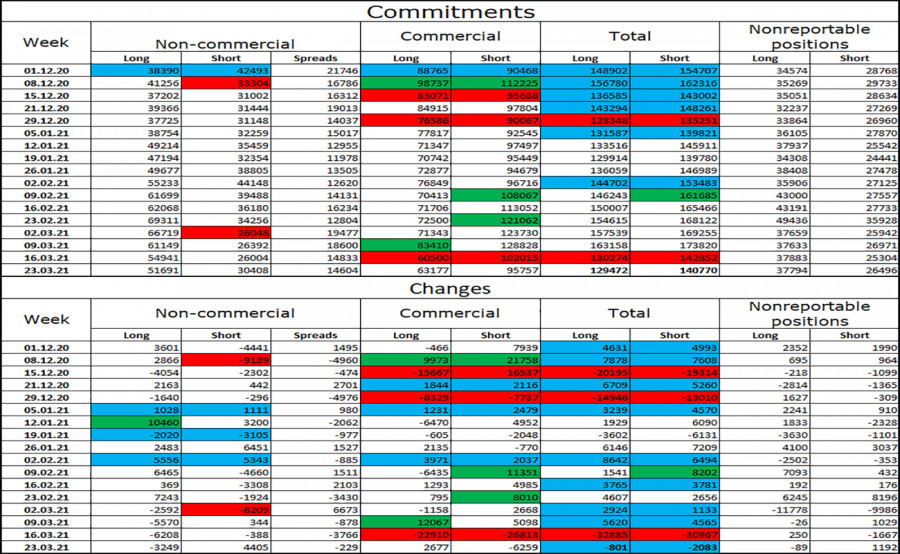 The latest COT report on March 23 for the British pound showed moderate changes in the mood of major players. The category of traders “Non-commercial” again got rid of long contracts, closing 3249 of them, and also increased short contracts, opening 4405 of them. Thus, the mood of speculators has again become much more “bearish”. However, this effect is achieved mainly by reducing the number of long contracts. In general, in recent months, the total number of short-contracts focused on the hands of speculators has not changed – 30-40 thousand. Thus, the British dollar can continue to fall, and the trend line on the 4-hour chart will help determine the moment when it will end.

It was recommended to buy the British dollar if the quotes were fixed above the descending corridor on the hourly chart with the targets of 1.3820 and 1.3900. The first goal was achieved. I recommend new purchases when rebounding from the level of 76.4% (1.3721) on the hourly chart. It was recommended to sell the pound sterling at the rebound from the level of 1.3850 or the trend line on the 4-hour chart with a target of 1.3701, but traders did not reach 1.3850 just a few points.