The stagnation of the single European currency is becoming more pronounced, which is largely due to the complete absence of any macroeconomic reports, both in Europe and in the United States. Furthermore, no one really wants to take risks before preliminary data on inflation in the euro area is released. Moreover, data on consumer prices in Spain and Germany will be published today. Inflation is expected to rise in both countries. The growth rate of consumer prices in the fourth economy of the euro area (Spain) should accelerate from 0.0% to 0.3%. Meanwhile, they should accelerate from 1.3% to 1.5% in Europe’s largest economy (Germany). In addition, Spain will also release a report on retail sales, the rate of decline of which may slow down from -9.5% to -4.2%. As you can see, the forecasts for macroeconomic data are extremely positive. All that remains is for them to be confirmed. And in theory, the increase in inflation, in the direction of the target level of the European Central Bank, and even in combination with the growth of retail sales, is an excellent reason to strengthen the euro. However, do not forget about the growing fears about the possibility of unwinding the inflationary spiral. Against this background, the growth in retail sales will be seen as confirmation of these concerns. Rising demand inevitably pushes prices up. So, it is not strange, but today the quotes can go both up and down. Another thing is that we are talking about data on individual countries of the euro area, and some serious activity should not be expected. In any case, it is better to act on the situation, that is after reports are published. Especially in Germany. 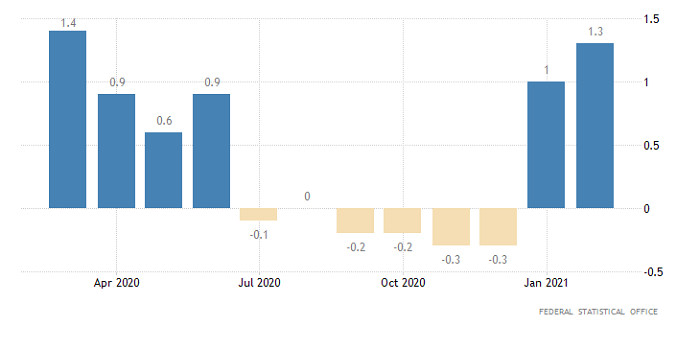 The EURUSD pair has been moving in a narrow range of 1.1760/1.1805 for two days now, grabbing the attention of speculators. This price behavior leads to a cumulative process, which will lead to an acceleration in the market in the form of a local spike in activity.

Market volatility is abnormally low, more than 50% below the average.

If we proceed from the quote’s current location, then nothing dramatic has happened in the market yet, the price, as before, remains within the established range.

Considering the trading chart in general terms, the daily period, we can see that the quote, without any changes, follows the structure of the corrective move from the medium-term trend’s high 1.2349 -> 1.1760.

In this situation, we can assume that there is almost a 100% probability that the cumulative process within 1.1760/1.1805 will lead to a local acceleration, and if we proceed from the market’s direction from the beginning of the year, then there is a chance of a subsequent downward development after keeping the price below 1.1755.

From the point of view of a complex indicator analysis, we see that the indicators of technical instruments on the minute, hourly and daily timeframes signal a sell, due to the price being concentrated within the March 25 low.