It is clear that the US dollar seems to be stronger than its competitors recently due to several reasons. First, there is a higher vaccination rate, which indicates that restrictions will be lifted earlier than expected. Second, the unprecedented incentive program also suggests a stronger boost to economic recovery when measured as a percentage of GDP. Third, the actual refusal to control the yield curve leads to a faster growth of UST yields against competitors. Fourth, ISM indices, which give a fairly informative picture of the state of all sectors of the economy, are rising faster than most competitors.

These and other reasons are the basis for the sharp transition of speculators towards bullish outlook. The CFTC report showed that the dollar’s net short position continues to steadily decline, which fell by 2.5 billion to 10.609 billion. And although the euro has experienced a slight upward pullback, the current situation is clearly in favor of the US dollar.

At the same time, the consumer sentiment index from the University of Michigan continues to increase despite the fact that the dynamics of personal income and spending in February was generally slightly worse than expected. Now, consumers expect revenue growth. 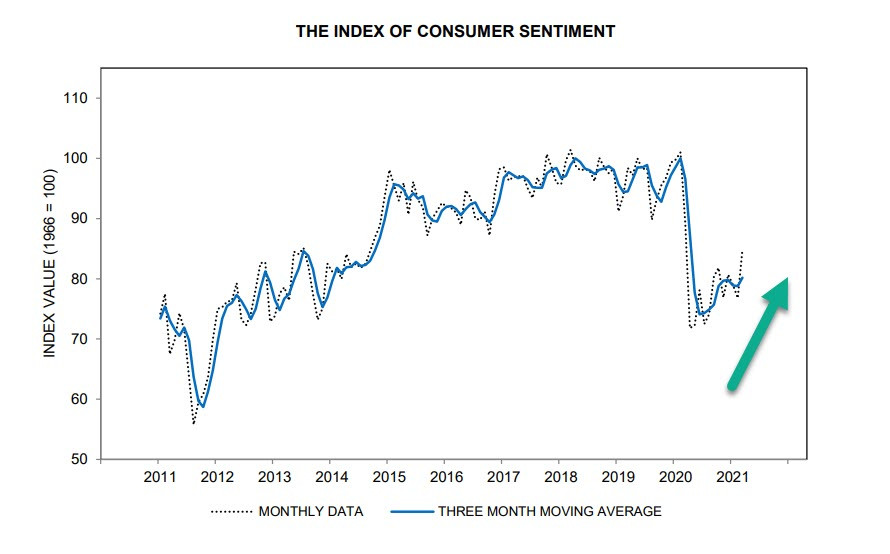 The dynamics of inflation-protected TIPS bonds are also in favor of continuing growth. The yield of 5-year TIPS rose to 2.57% last Friday after slightly correcting on March 19-23, which allows us to expect growth in consumer inflation.

We can assume that the US dollar will try to maintain its growth, but strong movements are unlikely to be expected until Friday, unless some surprising impulse appears. As the Fed focuses on reaching maximum employment as quickly as possible, Friday’s Nonfarm payrolls will be taken as a general guideline. So far, we predict growth in the number of new jobs by 630,000, a decline in unemployment from 6.2% to 6.0% and an increase in average wages by 4.5%. These are very strong indicators, and expectations will push the dollar higher, since a strong report will bring the adjustment date for the Fed’s QE program closer. If the manufacturing ISM report also comes out strong the day before, which is expected, then the US dollar may further strengthen until the end of the week.

A slight pullback was observed following the previous week’s closing of short positions in the Euro currency. Based on the CFTC report, the long position rose by 436 million, but it did not change the overall trend. The target price continues to decline considering not only the CFTC reports, but also the state of the bond, stock and commodity markets. 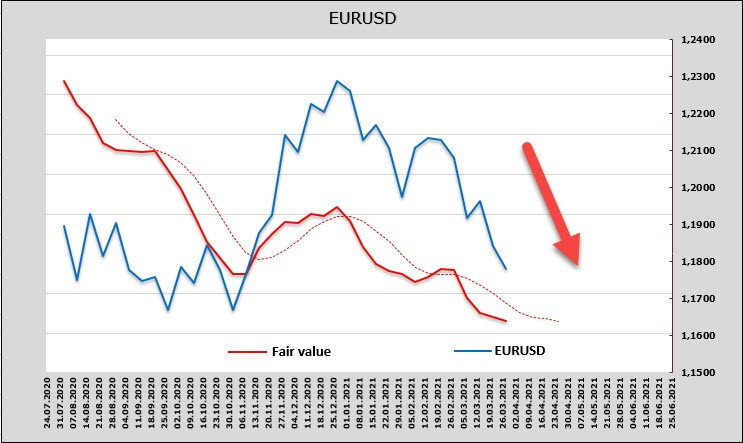 This week is not very informative for the euro in terms of macroeconomic reports. On Tuesday, the European Commission will publish some indices, while on Wednesday, there will be preliminary inflation data for March.

At the same time, the political news from Europe is depressing. The vaccination rates have been greatly disrupted, Europe is waiting for a third even more devastating wave of COVID-19, and the German Constitutional Court has partially approved the claim of the Bundesbank, which does not want to participate in the ECB’s QE program, threatening the ratification of the EU recovery fund.

It can be assumed that the EUR/USD pair will continue to decline. Today, it is likely to move below the low (1.1761). The next target is set at 1.1695, which is expected to be tested in the long term.

Of all the advantages observed at the beginning of the year, the pound has only a higher rate of vaccination. All the other factors that pushed it up have either completed their effect or weakened.

The pound’s net long futures position declined by 608 million to 1.875 billion during the reporting week. The dynamics are negative, and the pound is also slowly losing position to the dollar in other components of the settlement price. Therefore, we have a downward trend. 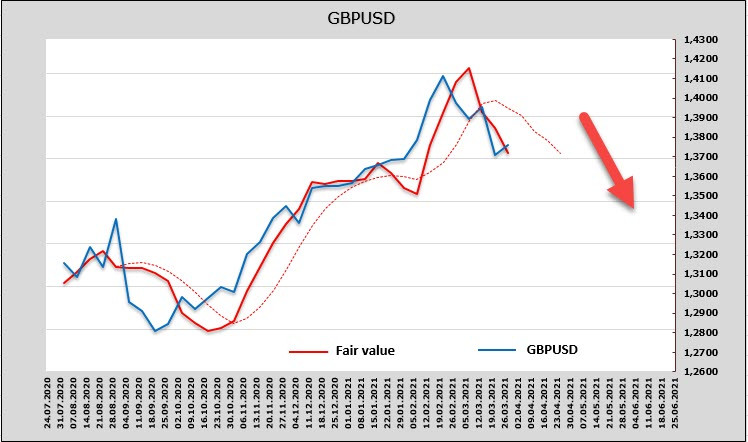 Today, the banks are closed due to the religious holiday. There will also be no major publications or speeches expected until Wednesday. The local low of 1.3670 is weak, so the upward correction may resume to the resistance zone 1.3670/90, where it is possible to continue selling. The long-term target (1.3440/90) is still the same.