Last week, the British pound declined against the US dollar. However, this decline was quite peculiar and amounted to only 0.48%. This will be discussed in more detail in the technical part of this article. For now, we will turn to other information, where the topic of vaccination of the population and the distribution of medicines against the coronavirus epidemic continues to be one of the main topics. It is no secret that in the UK, the vaccination campaign is much more successful, and its pace is significantly higher than that observed in recent allies from the EU. In this regard, Brussels officials want to limit or even ban the supply of vaccines from COVID-19, which are produced on the territory of the European Union to other countries, in particular to the UK. Naturally, London categorically does not agree with this statement of the issue and intends to defend its rights in the vaccine market, demanding the implementation of previously reached agreements. However, in the European Union, the vaccination company has failed, as several manufacturers have not fulfilled the agreements on the timing and quantity of drugs supplied to the EU. But that’s not all. Many EU citizens refuse to get vaccinated for fear of side effects. The most typical example is the AstraZeneca vaccine, which has been criticized throughout, for the frequent manifestation of side effects and low effectiveness of the drug.

Since vaccination is happening more rapidly in the UK, the United Kingdom is likely to develop collective immunity as soon as possible, which will allow for a faster return to normal life and eliminate a significant part of the restrictions, allowing businesses to operate in their usual full mode. In this regard, the Bank of England urged lenders not to skimp and to issue loans in sufficient volume to quickly and more painlessly overcome the crisis caused by the COVID-19 pandemic. Meanwhile, an election campaign has been launched in Scotland. Already disliking London, Scotland’s First Minister Nicola Sturgeon may give up her seat to former First Minister Alex Salmond, who created and led the Alba party, strictly focused on Scotland’s exit from the UK. 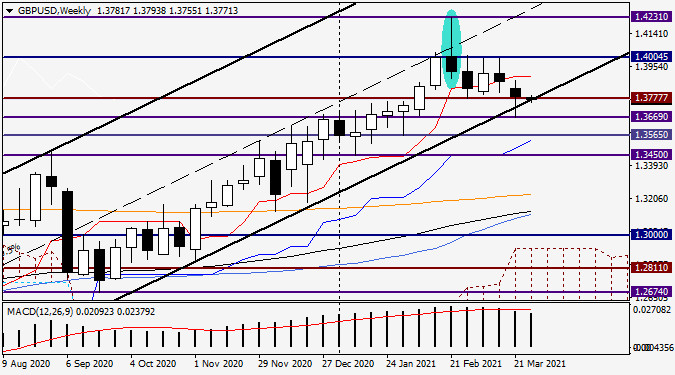 Despite everything, the British pound is kept in pair with the US dollar quite confidently, as evidenced by the smallest decline in the “British” against the dollar, compared to other major currencies. In addition to this fact, I recommend paying attention to the last weekly candle, the lower shadow of which is at least twice as large as the bearish body itself. I assume that this is another proof of the current confidence of the bulls in the pound, who are not going to give up their positions and allow the quote to collapse. The pair did not approach the key resistance level of 1.4000 to test it once again for a breakout. Also, it could not even reach the red line of the Ichimoku Tenkan indicator, which lay at another important and strong level of 1.3900. The long lower shadow of the last candle leaves hope that the situation may change and the pair will resume strengthening. However, for this to happen, several factors, including fundamental ones, must coincide. 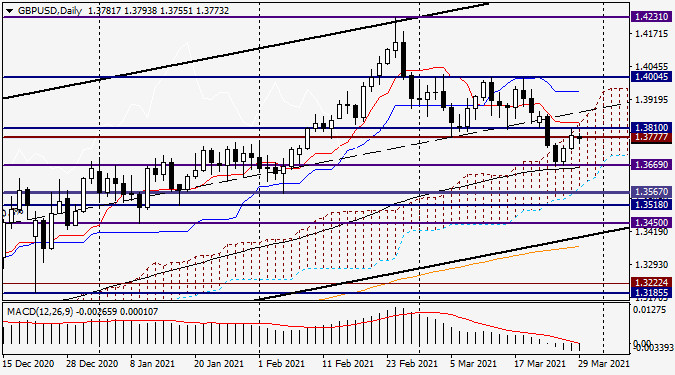 A very interesting picture is also observed on the daily price chart. As you can see, after the decline to 1.3669, a two-day increase followed, which so far seems more corrective. Why? First, the pair did not come up from the Ichimoku cloud. Secondly, attempts at such an exit can negate the red Tenkan line and the blue 50 simple moving average, which are located near 1.3830. In my personal opinion, only the exit from the daily cloud, followed by a true breakdown of the Tenkan line and 50 MA, will inspire the bulls for new achievements. In this case, their next targets will be 1.3900, 1.3950, and 1.4000, where everything will be decided. In the case of a true breakdown of support in the area of 1.3670-1.3660, where, in addition to the level, there is also a black 89 exponential, I expect a decline in the area of the lower border of the Ichimoku indicator cloud, while the marks where the quote can fall will be 1.3600 and 1.3560.

Immediately, it is worth noting that the situation for opening positions is far from unambiguous. Nevertheless, I most likely assume a downward scenario for the pound and its sales from the area of 1.3805-1.3840. Purchases, when the corresponding candle signals appear, can be tried near 1.3750 or after a decline in the strong technical area of 1.3700-1.3675.