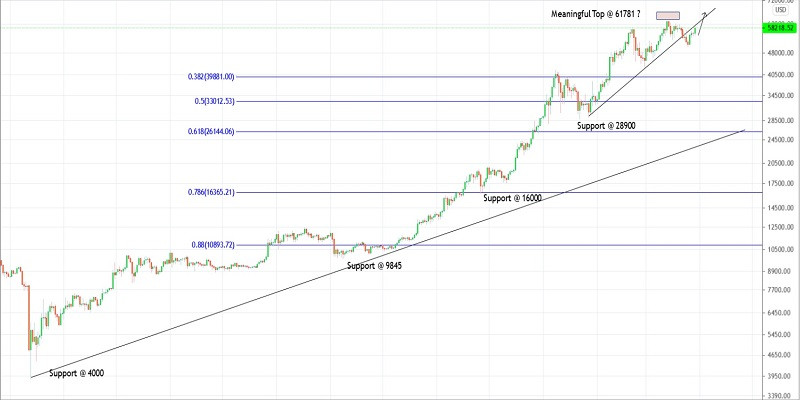 Bitcoin has rallied smartly after having print lows around $50,500 mark over the last week. The move has been in line with what was discussed and expected last week. At the moment, the crypto is hitting back side of trend line and might face resistance. It might be a good idea to book profits on the long positions taken over last week and remain flat.

Bitcoin is seen to be trading around $58,200 levels at this point in writing, and is expected to face some selling pressure due to trend line resistance. Immediate resistance is seen at $60,000, followed by $62,000; while interim support comes in around $50,000, followed by $43,000 respectively. If a bearish reaction is produced at current price, the crypto might drop below $50,000 as well, going forward.

The overall uptrend remains intact since March 2020 lows registered around $3,850 levels earlier. Since the immediate trend line was broken and prices are now testing its back side, which is resistance now, Bitcoin might face the risk of a potential bearish reversal here. Traders might take profits on long positions initiated last week.