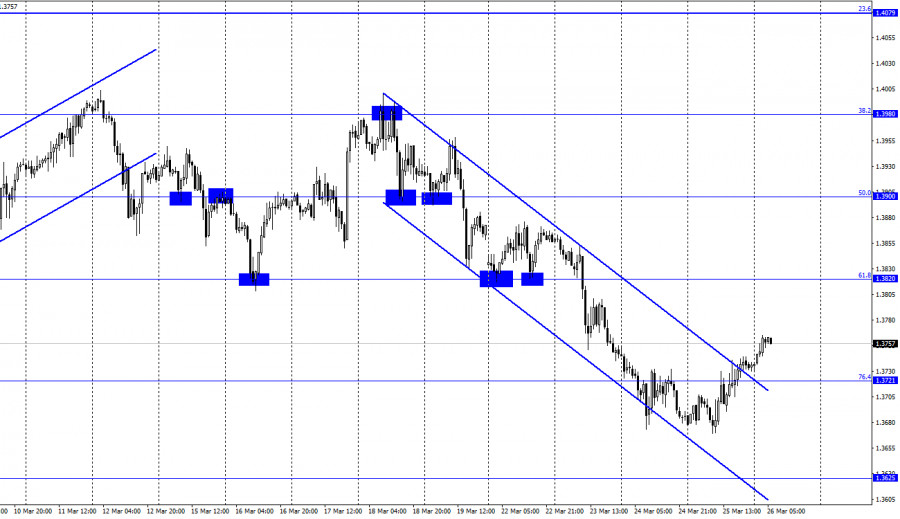 According to the hourly chart, the quotes of the GBP/USD pair performed a reversal in favor of the British currency and closed over the downward trend corridor. Thus, at the moment, I note a change in the mood of traders to “bullish” and expect the growth process in the direction of the corrective level of 61.8% (1.3820). The information background of yesterday was reduced to the same reports from America. However, if the European currency reacted to them with a fall, which is very logical, then the British one – with growth, which is not consistent with the nature of the reports themselves. Thus, the British and European yesterday moved differently, although the information background in the European Union and the UK was absent, so I could not pull one or the other currency in my direction. The Governor of the Bank of England, Andrew Bailey, made two speeches yesterday, however, he did not say anything interesting at all. The Bank of England introduced a new 50-pound note and Bailey’s entire speech concerned Alan Turing, a cryptographer and mathematician who managed to decipher the code of the German Enigma cipher machine during the Second World War, and whose portrait will be applied to the new bill. Today, just within an hour in the UK, a report on retail trade volumes will be released, and after the disastrous January, the indicators may recover slightly in monthly terms. However, I believe that this data will not attract the attention of traders, just as important reports from the United States did not attract attention yesterday. The minutes of the Bank of England’s Financial Policy Committee meeting will also be published today, however, it is also unlikely to provoke a strong reaction. Most likely, today, the British will again move according to “their own rules”. 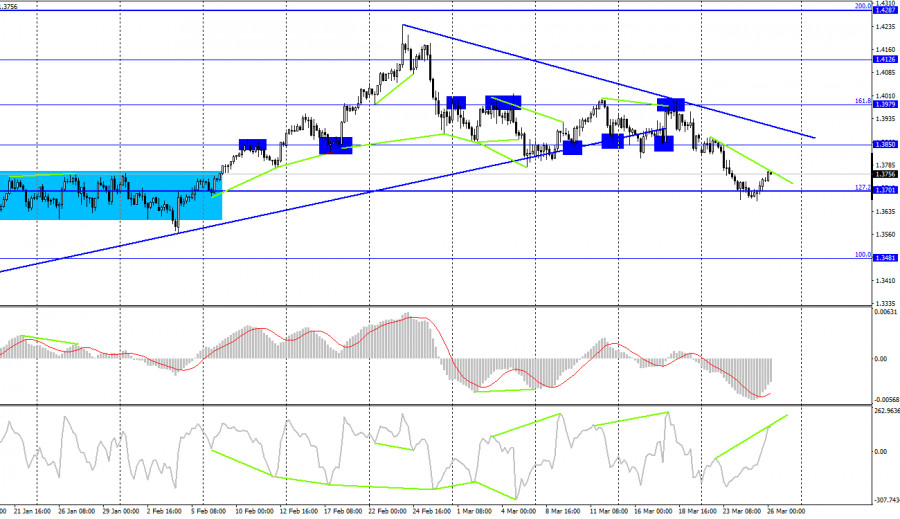 On the 4-hour chart, the GBP/USD pair performed a consolidation under the corrective level of 127.2% (1.3701), however, it immediately performed a reversal in favor of the British dollar and began the growth process in the direction of the level of 1.3850 and the downward trend line. Today, a bearish divergence is brewing in the CCI indicator, which may allow the pair to perform a new reversal in favor of the US currency and start a new fall. 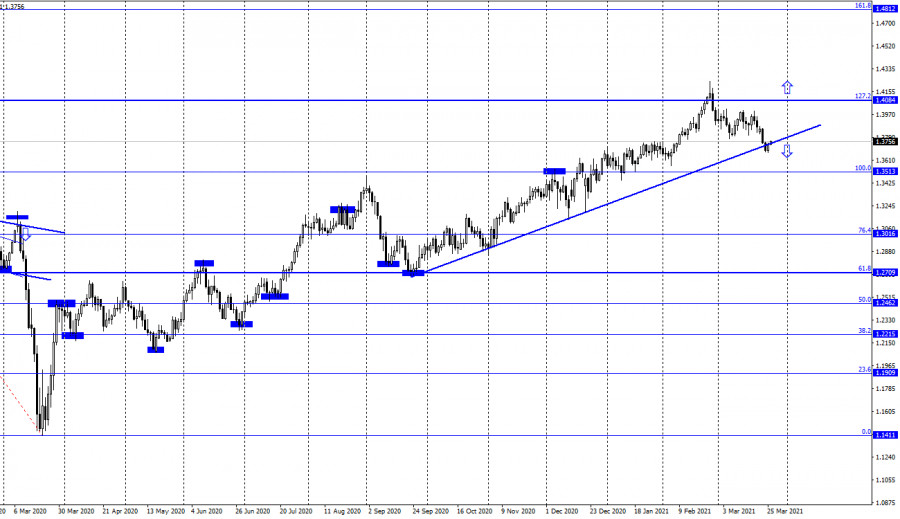 On the daily chart, the pair’s quotes closed under the ascending trend line. Thus, in the long term, the “bullish” mood of traders has changed to “bearish”. This is an important moment for the prospects of the British currency. However, yesterday and today, the British dollar shows a desire for growth, thus, a new fall may be postponed indefinitely. 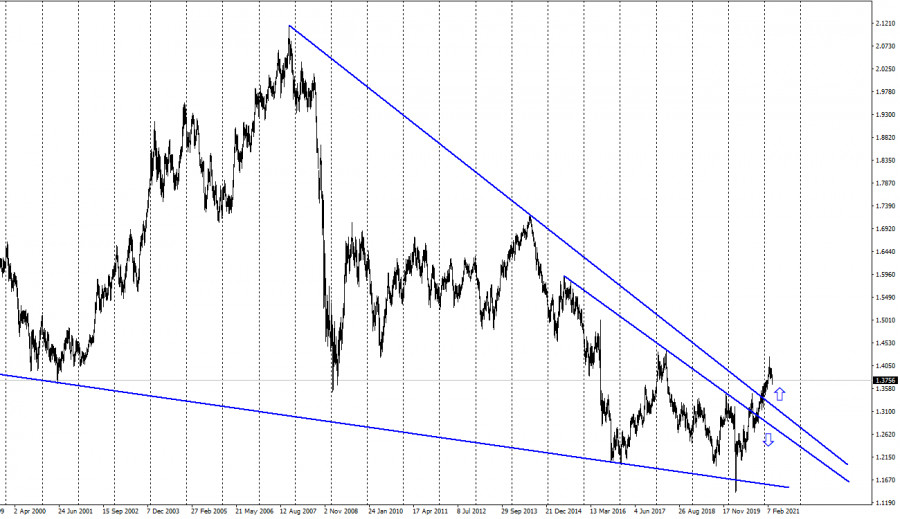 On Thursday, the Bank of England Governor’s speech in the UK did not provide any new information. Reports from the US were ignored.

UK – change in retail trade volume with and without fuel costs (07:00 GMT).

US – changes in the level of spending and income of the population (12:30 GMT). 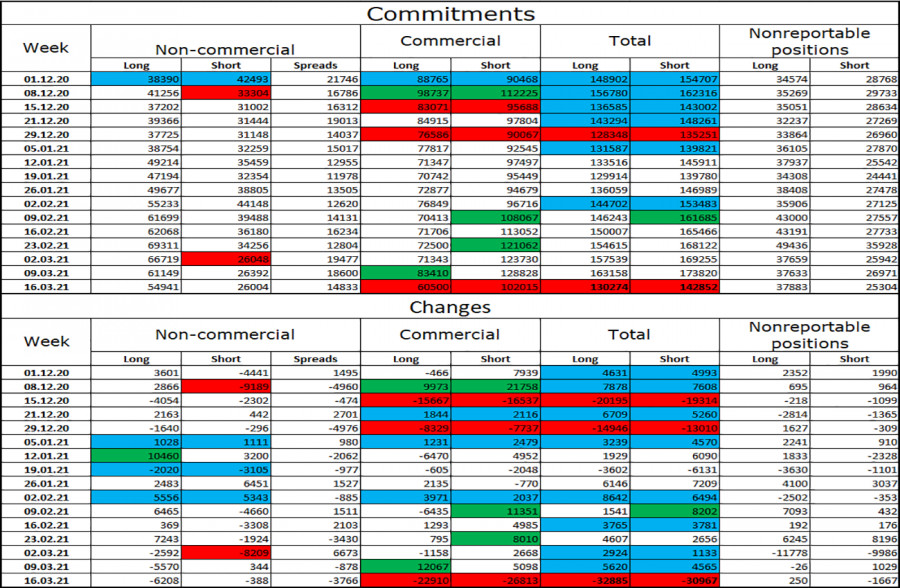 The latest COT report of March 16 on the British pound was just as discouraging as on the euro. The “Non-commercial” category of traders behaved much more modestly and closed only 6.2 thousand long contracts. But the category of “Commercial” traders got rid of 23 thousand long contracts and 27 thousand short contracts. Thus, in total, the Briton lost approximately 30-33 thousand contracts of both types. Such a sharp drop in activity, by the way, did not affect the chart of the pair in any way. I can only conclude that the “bullish” mood of traders has weakened even more recently. However, the number of purchases in the hands of speculators is still twice as large as the number of sales.