USD/JPY moves within a narrow range in the short term after the last impressive rally. It has moved sideways trying to accumulate more bullish energy before resuming its upwards movement.

Technically, the pair is expected to jump higher if the USDX and JP225 will resume their growth in the short term. The Japanese Yen could drop aggressively versus all its rivals if the Nikkei will come back higher after its temporary decline.

USDX jumped higher registering a new higher high after the US Final GDP increased by 4.3% more versus 4.1% expected and the Unemployment Claims dropped from 781k to 684k in the last week. 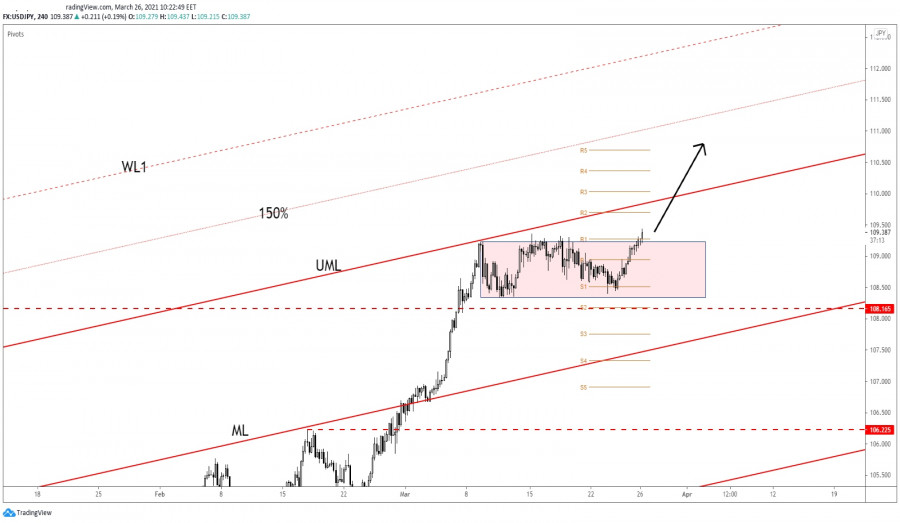 As you already know from my analysis, USD/JPY is expected to resume its growth, upwards movement after developing a temporary accumulation. The sideways movement is seen as a continuation pattern.

The current upside breakout signals that the accumulation, consolidation, has ended and the pair should jump higher with a first upside target at the R2 (109.70) level. The upper median line (UML) could attract the price after its failure to drop towards the median line (ML).

A valid breakout above the upper median line (UML) validates a strong growth in the upcoming period.

Closing above 109.36 former high represents a bullish signal. 110.00 psychological level and the upper median line (UML) could be used as the first upside targets.