Gold stands at 1,727 level and continues to pressure critical static support. Registering a new lower low could activate a new sell-off in the short term. The price escaped from a minor continuation pattern, so a deeper drop is natural.

The yellow metal could extend its decline if the US Dollar Index resumes its upwards movement. The greenback is expected to appreciate versus its rivals if the US data will beat expectations.

The US Final GDP increased by 4.3% beating 4.1% expected, while the Unemployment Claims dropped unexpectedly lower in the last week from 781K to 684K, much below 727K estimated, so the USD may resume its growth.

Today, the US is to release the Revised UoM Consumer Sentiment, Prelim Wholesales Inventories, Personal Spending, and Personal Income data. Better than expected figures could boost the USD and could send the gold price lower. 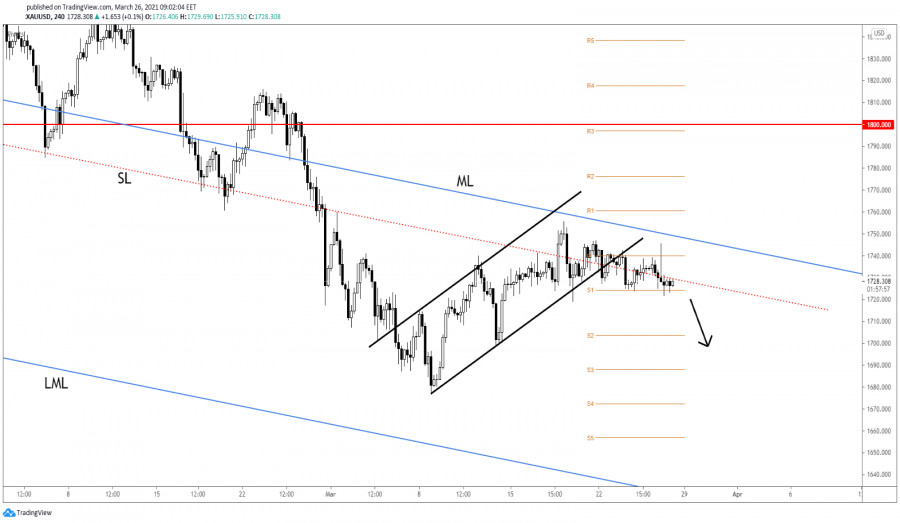 Gold registered a false breakout with great separation above the Pivot Point (1,740) static resistance signaling a bearish pressure. It stands below the inside sliding line (SL) of the major descending pitchfork continuing to pressure the S1 (1,724).

Dropping and closing under 1,719 may bring a selling opportunity and could confirm a further decline in the upcoming period. A new bearish momentum could be invalidated only by a valid breakout above the median line (ML) and by a new higher high, jump above 1,755.