30M chart of the EUR/USD pair 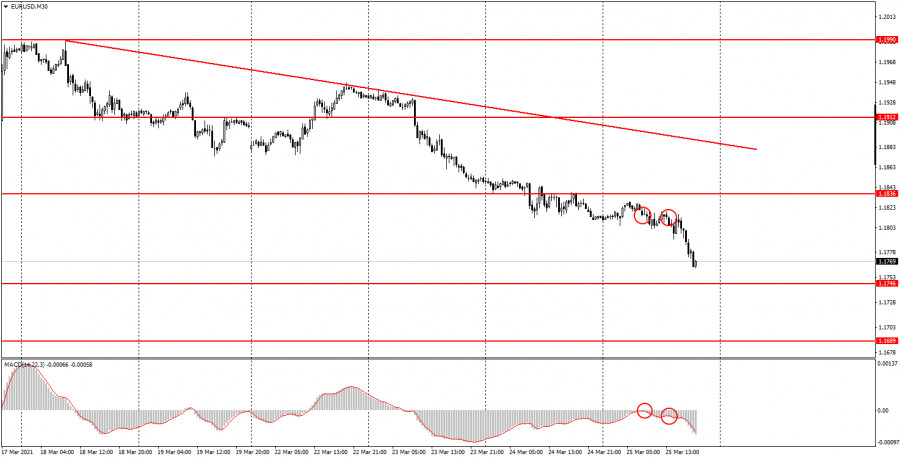 The EUR/USD pair moved in a very clear manner on Thursday and only in one direction for almost all day. The dollar continues to rise against its European competitors and has already come close to the 1.1746 level, which is an extreme level, that is, a level from which the price has already rebounded off. And once it bounced before, it can do it now. Two signals formed on the 30-minute chart today. Both from the MACD indicator, which turned down. Only sell signals should have been considered, since there is a downward trend line at this time, which clearly indicates a downward trend. The downward movement did not last long after the first signal was formed. Just around 13 points down. After that, a turn of the same weak upward movement began, and if the MACD indicator turned to the upside, it was possible to leave this transaction. The profit would be zero, since this trade would have closed at around the same level where it had been opened. The second signal from MACD turned out to be stronger. After it was formed, the EUR/USD pair went down by around 40 points, and we advise you to set Take Profit at a distance of 30-40 points from the trade opening point.

5M chart of the EUR/USD pair 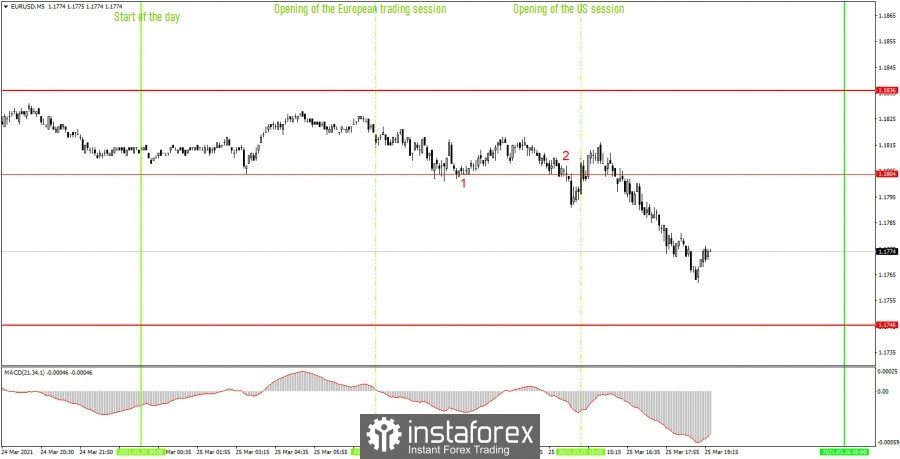 Let’s take a look at the 5 minute timeframe in order to understand what was happening in the currency market for the euro/dollar pair today. Overnight trading was surprisingly active, but with the opening of the European session, the bears tried to take the initiative into their own hands. They were resisted by the 1.1804 level for a long time. Look closely at the chart: the price rebounded off this level during the overnight trading and did the same during the European trading session. Thus, it was even possible to try to buy the pair from this level, since two rebounds are serious, but the upward movement did not last long, so the deal could be closed at zero with the opposite approach to the 1.1804 level. The number “1” in the chart marks the beginning of European Central Bank President Christine Lagarde’s speech. Novice traders can clearly see that after Lagarde’s speech began, the mood of the markets has not changed much, and the movement has not increased. It was after the beginning of her speech that the pair went up the notorious 13 points, after which it resumed its fall. This time, the attempt to break through the 1.1804 level was more successful. Meanwhile Q4 GDP and Unemployment Claims (number 2) were released in America. The GDP indicator was revised for the better and showed an increase in the fourth quarter of 4.3% y/y, and the rate of applications for unemployment benefits turned out to be better than the analysts’ forecasts, therefore, the downward movement should have intensified following these two reports. It only intensified later and was hardly connected with US reports. One way or another, the quotes initially returned to the 1.1804 level, then it settled below it again, and the last signal was the only one that was not false. A rather strong downward movement began after it, thanks to which traders could cover all losses from previous signals.

How to trade on Friday:

We recommend trading on the 30-minute sell timeframe on Friday, as the downward trend continues for now. The MACD indicator needs to be given time to discharge to the zero level and only after that should you look for an opportunity to open new short positions. The 1.1746 level will also be important. Rebounding or surpassing it will also allow novice traders to open the appropriate trade. Take Profit, as before, at a distance of 30-40 points. The 1.1791 level can be distinguished on the 5-minute timeframe. You can open new short positions when bouncing from it from below.