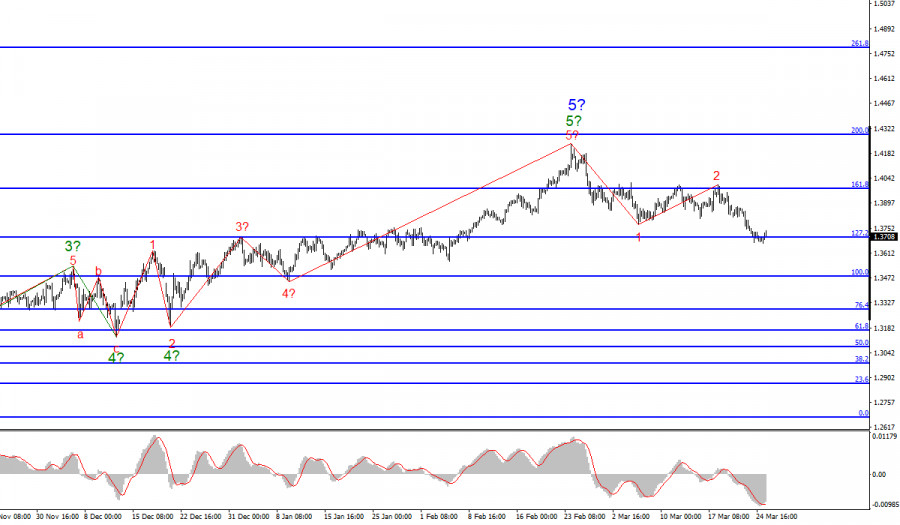 The wave pattern for the Pound/Dollar instrument looks more convincing after several adjustments. At this time, waves 1 and 2 of the new downward trend are clearly visible. They can also be waves a and b of the corrective part of the trend, but for now, I consider them still as part of the new impulse section of the trend. There are no internal waves inside the supposed wave 3, so it is difficult to imagine how long this wave will be. An attempt to break through the 127.2% Fibonacci level at the moment has been unsuccessful, although attempts to close below this mark were persistent. Inside the supposed wave 3, five well-readable waves should be built, as inside wave 1. In this case, the current wave counting will retain its integrity and will not require adjustments.

Everything that has been said regarding the news background for the Euro/Dollar instrument also applies to the pound sterling. During this week, there was only one report in the UK that really caught the attention of the markets – it was the report on inflation, which fell sharply compared to the previous month, instead of rising. Thus, in part, the decline in demand for the sterling this week was due to weak inflation. Today, the sterling began to rise, although the reports on GDP in the US and on applications for unemployment benefits should have kept demand for the dollar at a high level. But today’s statistics have been ignored. The speech of the Governor of the Bank of England, Andrew Bailey, scheduled for today, also gave no information to the markets. Bailey simply didn’t reveal anything interesting, as did his ECB counterpart Christine Lagarde. But there are more reasons to assume that the current decline in sterling and euro may be associated with coronavirus and vaccines against it. If in the UK, everything is more or less good with the vaccination process, in Europe it is not. On the other hand, there are growing claims around the world against the British-Swedish vaccine AstraZeneca. At first, the company did not cope with deliveries to the European Union, then many EU countries temporarily suspended its use after several people died allegedly from the side effects of the vaccine. The pharmaceutical company has now upgraded the effectiveness of its vaccine from 79% to 76%. Additional efficacy studies were initiated by US officials who disclosed that the company had hidden the results of some studies for advertising purposes. Thus, confidence in the vaccine is reduced.

At this time, I still expect the formation of a downward wave 3. Thus, I recommend continuing to sell the instrument for each new MACD signal “down” with targets located near the 35th figure. So far, there are no grounds to assume that the wave counting will become more complex. 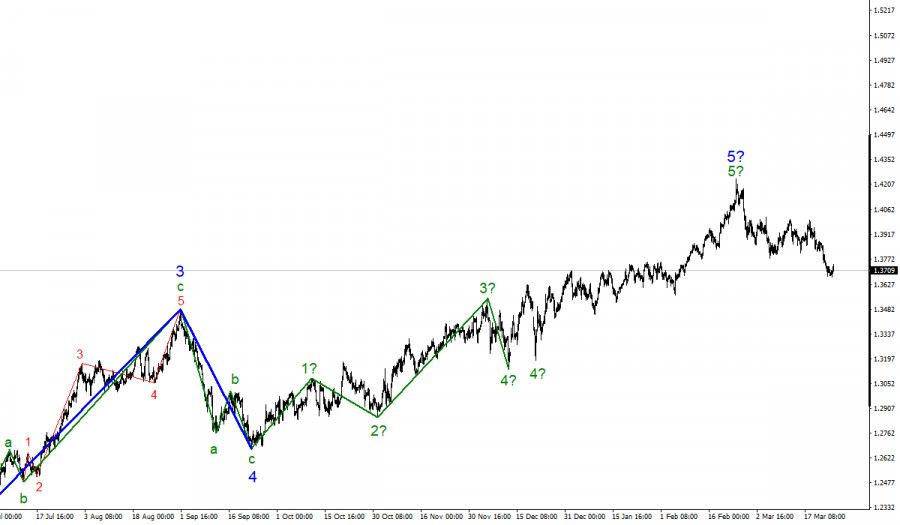 The part of the trend, originating on September 23, took a five-wave, fully completed form. But the internal wave structure of the supposed 5-5 wave still looks not entirely convincing and may require some additions and adjustments. At the moment, I consider the upward trend to be completed, so I expect the construction of a global three-wave downward trend.