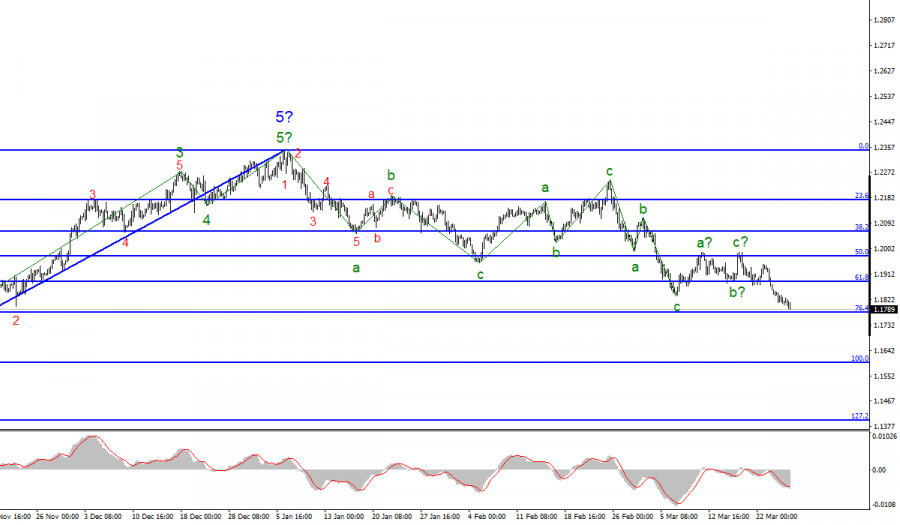 The wave counting on the 4-hour chart nevertheless took on a more non-standard form, since the markets did not manage to overcome the 50.0% Fibonacci level. However, after making small adjustments, the wave counting still looks quite understandable. Thus, at the moment, the construction of a new, next three downward waves continues. On the major scale, this set of waves is identified as the inferred wave e. And if the current wave counting is correct, then the decline in quotes may end around the 76.4% Fibonacci level. It is about this level that I talked about in yesterday’s review. An unsuccessful attempt to break through it may lead to a withdrawal of quotes from the lows reached. Inside the supposed wave e, three waves are clearly visible. Thus, the entire section of the trend, which began at the beginning of this year, can be completed as early as this week. Further, I expect at least three upward waves to form. However, with a successful attempt to break through the 76.4% Fibonacci level, the downward trend may become more complicated.

There were a lot of interesting events in the news calendar today. Note that this week, in principle, a lot of different events and reports were planned. However, at the moment I can say that 90% of them did not affect the course of trading. The same picture was observed today. What’s the point that the news calendar is replete with entries like “Christine Lagarde’s speech” and “US GDP report” if the ECB chairman does not tell the markets anything interesting, and market participants ignore the GDP report, which, objectively, is the most important indicator of the state of any economy? As you already understood, Christine Lagarde’s speech today did not provide any new information. US GDP in the fourth quarter increased not by 4.1% y/y, as expected earlier, but by 4.3% y/y. That is, the value has been increased. The demand for the US dollar did not change in any way because of this report. Markets both sold the instrument at a leisurely pace and continued to do so on Thursday. The number of initial claims for unemployment benefits was significantly lower than market expectations, and the number of continuing claims is simply lower. So these reports could also boost the demand for the US dollar. But, as I said, nothing has changed with the release of these reports. The decline in quotes did not intensify, did not slow down, did not change in any way. Thus, I believe that the wave counting is now more important than the news background.

Based on the analysis, I recommend staying in the sales with targets around the estimated 1.1776 mark. In case of a successful attempt to break through this mark, I recommend continuing to remain in sales with targets located around 1.1602, which equates to 100.0% Fibonacci. An unsuccessful attempt to break through the 76.4% level may become a reason for cautious and small purchases of the instrument. 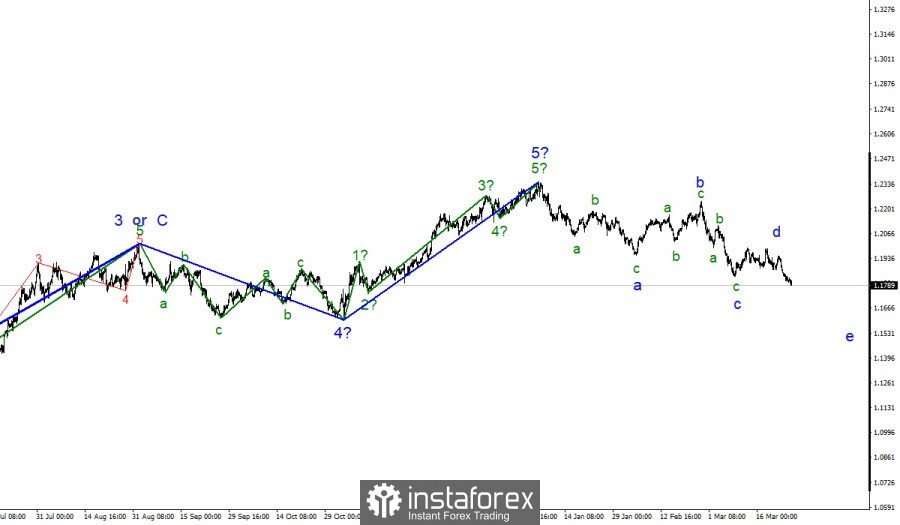 The wave counting of the upward trend section is still quite complete, in a five-wave form, and is not going to get complicated yet. But the part of the trend, which began its construction immediately after it, takes on a rather complex form. The instrument is likely to build alternating corrective structures for some time. Supposed wave d turned out to be shortened, so now the construction of the supposed wave e continues.