In my morning review, I paid attention to the level of 1.1804 and recommended actions based on it. The chart clearly shows how the bulls protect this range, forming a false breakout there in the expectation of a repeated upward correction of the pair, which leads to the formation of an excellent entry point into long positions (the entry into the market is visible on the chart). However, by the middle of the day, it was not possible to wait for a large growth of the pair, and the upward movement was about 13 points. I decided not to hold any longer long positions against the downward trend and left the market. 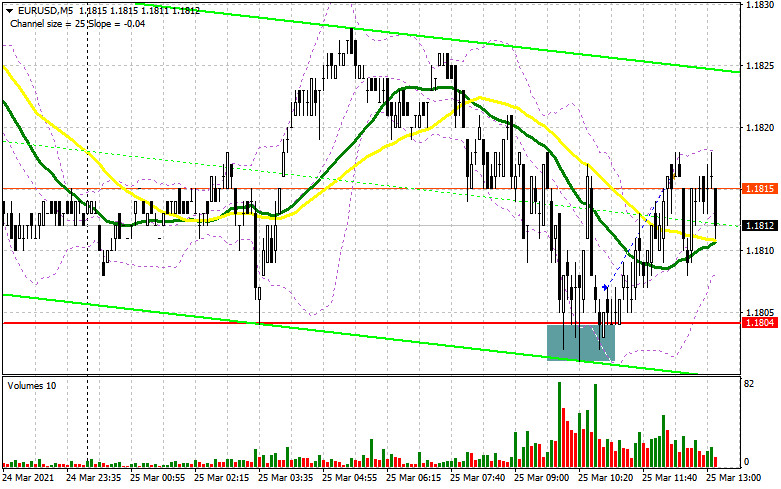 From a technical point of view, nothing has changed and the tactics have remained the same except for one point: as long as the trade is conducted above the support of 1.1804, the demand for the euro will remain, which may lead to a larger upward correction to the resistance area of 1.1843. In the case of a decline in the pair in the second half of the day, only the formation of a false breakdown in the support area of 1.1804, which was already tested today during the Asian and European sessions, will form a signal to open long positions. If there is no bull activity at this level, and it is likely that after the third test of the level of 1.1804, buyers will start to leave the market – I recommend that you postpone long positions in the euro immediately for a rebound from the larger minimum of 1.1760 in the expectation of a rebound of 20-25 points within the day. An equally important task for the bulls is to consolidate above the resistance of 1.184. Its top-down test forms an excellent signal to open long positions in the expectation of continued growth of the pair, but the task of buyers is complicated by the fact that just below this range are moving averages that play on the side of sellers. They will seriously limit the upward potential of the pair. The main goal of the bulls after the breakdown of the resistance of 1.1843 will be to return to the level of 1.1892, where I recommend taking a profit.

The bears did not cope with the morning task of breaking through 1.1804 and the whole focus remains on this level. The data on the US labor market may allow sellers to achieve a breakthrough of this support, which will lead to a new wave of decline in the pair. A break and test of this level from the bottom up will increase the pressure on the pair and form a good sell signal in the continuation of the bear market. The target will be at least 1.1760, where I recommend fixing the profit. The next major area is seen around 1.1714. In the scenario of EUR/USD growth in the second half of the day, the focus will be shifted to the resistance of 1.1843: the optimal scenario for opening short positions will be the formation of a false breakout there, while the larger area from which you can open short positions immediately for a rebound is located slightly higher – in the area of 1.1892. After the first test of this level, you can expect a downward correction of 20-25 points within the day. 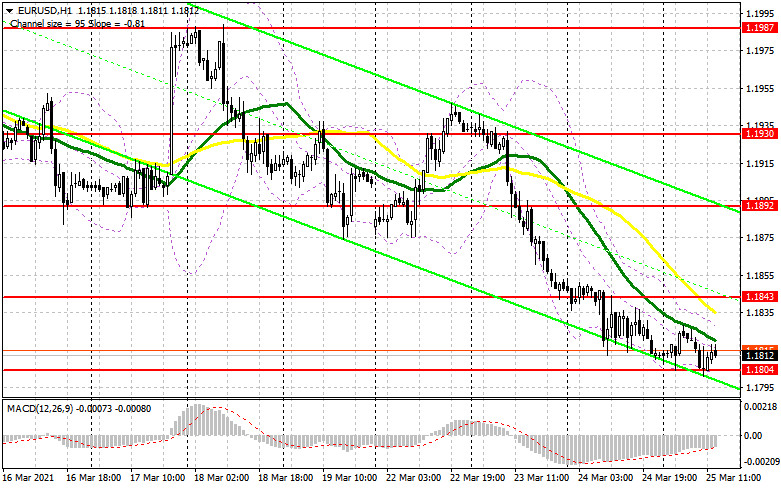 Let me remind you that the COT report (Commitment of Traders) for March 15 clearly shows how there is a further sharp reduction in long positions, but the growth of those who want to sell the euro is gradually slowing down. Despite this, the market remains on the side of sellers of risky assets, which may lead to further formation of a downward trend. This is confirmed by the chart of the euro’s fall, which we have been observing since the end of February this year. The sharp rise in the yield of ten-year US bonds plays in favor of the US dollar, as investors expect that the United States will be the first to start raising interest rates, which makes the dollar more attractive. The recent meeting of the Federal Reserve once again convinced investors that the US economy is recovering much faster than expected, which increases the risk of an earlier inflationary jump. At the moment, it is best not to rush into buying euros but to wait for lower prices. Another factor in the medium-term pressure on the euro is the repeated increase in the incidence of coronavirus in the eurozone countries and a weak vaccination program. Problems with the Aztrazeneca vaccine do not add confidence to investors who are betting on a more active summer growth rate of the EU economy. Only after the lifting of restrictions and the restoration of the service sector can we expect an improvement in the economic prospects of the eurozone, which will return the medium-term trend to the strengthening of the EUR/USD. The COT report shows that long non-profit positions declined to 195,857 from 207,588, while short non-profit positions only rose from 105,624 to 105,881. As a result, the total non-commercial net position declined for the fifth week in a row to the level of 89,976 from the level of 101,964. The weekly closing price was 1.1926 against 1.1812 a week earlier.

Trading is below 0 and 50 daily moving averages, which indicates that the euro will continue to decline in the short term.